aNCHOR has announced the release of its upcoming visual novel game, Muv-Luv photonmelodies. The game will be released on July 30th, 2020, on Steam, and will be priced at $29.99.

photonmelodies depicts the end of the journey for Muv-Luv‘s protagonist Takeru, an ordinary high school student who finds himself trapped in another world and caught up in a brutal war against alien invaders called the BETA. The series is famous for its brutality, gore, and unflinching depiction of trauma and the realities of war. Now, in photonmelodies, Takeru has returned home to his peaceful life in Japan, and the girls he loves are all waiting for him.

A more lighthearted take on the Muv-Luv universe than previous games, photonmelodies still has the same things that make the series great.

The game also contains two additional stories that expand further on the Muv-Luv universe: Adoration, a story about Europe’s struggles against the alien BETA onslaught, and Resurrection, a story about a cybernetic spy infiltrating a Japanese base.

About the Muv-Luv Series

An adventure game first released in 2003 by the visual novel company age. Its sequel, Muv-Luv Alternative, came out in 2006. Famous for its deep and compelling characters, its giant robots called “Tactical Surface Fighters”, and its engaging and shocking story, it’s been a hit with fans all around the world for over 15 years. Other titles in the series include Muv-Luv Alternative: Total Eclipse and Schwarzesmarken. 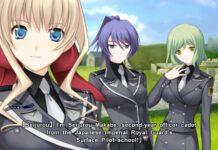