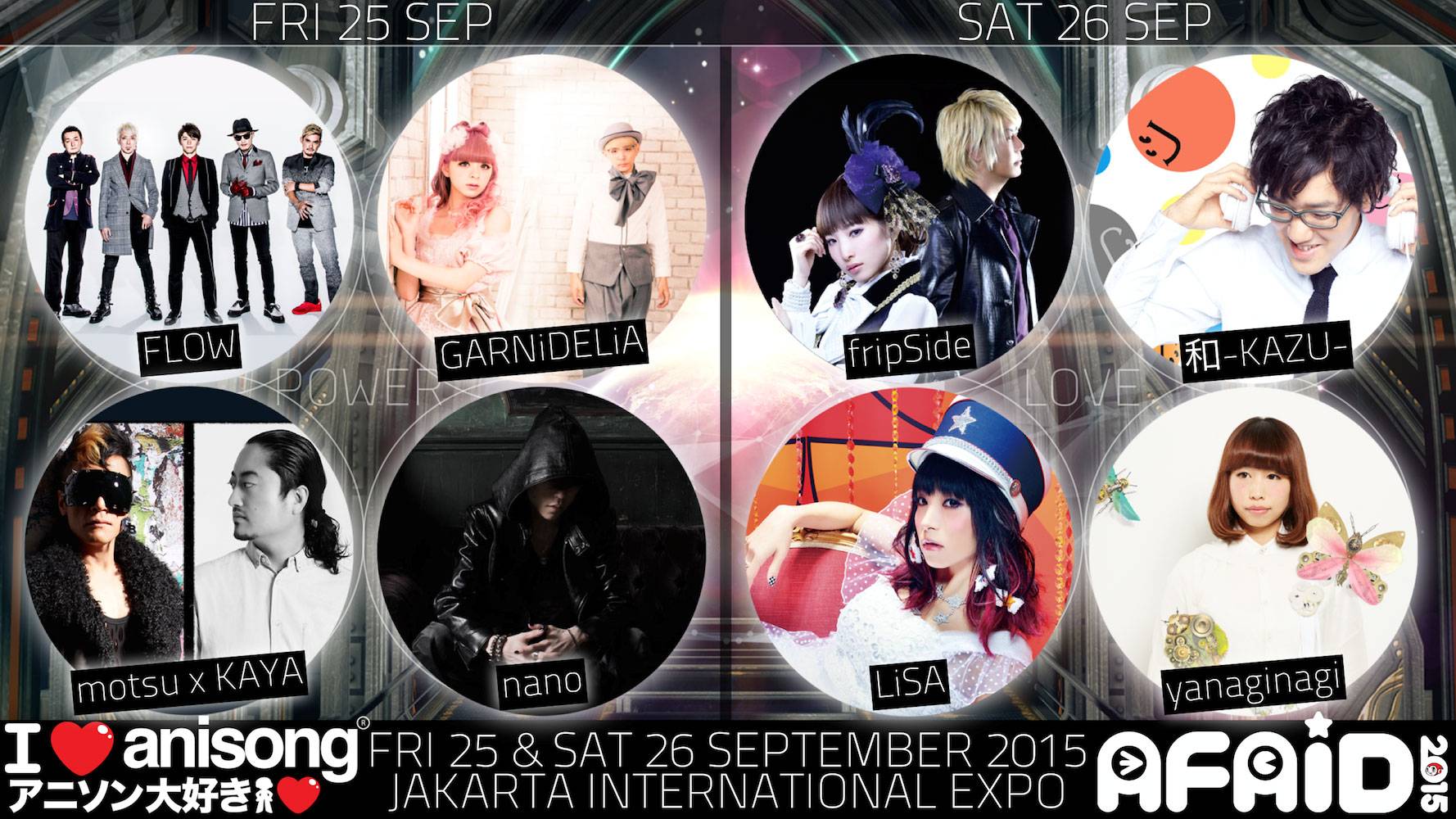 Establishing itself as Indonesia’s most premium pop culture event, AFAID (Anime Festival Asia Indonesia) is back for the 4th time this September 25, 26, 27!  Featuring a world of Japan Pop Culture experiences direct from Japan, AFAID 2015 (Anime Festival Asia Indonesia 2015) has moved to JIExpo Kemayoran Jakarta, to accommodate to growing attendance projected to attend AFAID in 2015.

Building on last year’s success of attracting 55,000 visitors over 3 days, this year’s AFAID aims to attract over 60,000 visitors, boasting over 120 booths.  Fans of Anime, Cosplay, Games and all things Japan Pop Culture will come face to face with their favorite Anisong Singers, enjoy exclusive merchandise direct from Japan, celebrate their favorite Anime by connecting with Voice Actors and behind the scene creators and engage with numerous cosplay activities, such as learning from the best guest cosplayers from around Asia.  This is an event not to be missed!

A key highlight of the festival, and recently announced, are performances from Japan’s top Anime Music Performers, behind some of the most celebrated Anime titles in Indonesia!

The performers appearing in AFAID 2015’s I LOVE ANISONG Concerts include:

FLOW – a Japanese rock band, formed in 1998. FLOW is a five-piece band made up of two vocalists, a drummer, a bassist, and a guitarist. As of March 2015, the band has released 29 singles and 9 studio albums. Their songs have been used in the opening sequences of several anime series.

fripSide – a unit formed by Satoshi Yaginuma（sat）in 2002. In 2009, Yoshino Nanjo joined the unit. Their first single “only my railgun” made its debut on the Oricon weekly chart at 3rd position. Following that, the continued to release a string of hits, one after the other. In 2012, to celebrate the 10th anniversary of fripSide, the album “Decade” was released. This was followed by “sister’s noise”, the opening theme song for “A Certain Scientific Railgun S” in May 2013, and attained the top spot on its debut on the Oricon weekly chart. In 2014, their 8th single, “black bullet”, 3rd album “infinite synthesis 2″ has been released. They embarked on their first ever nationwide tour of 6 cities in Japan last October. The tour made a huge success and all the concerts were sold out including the tour final held at Yokohama Arena on March 1. Their new 8th single “Luminize” has been just released in May.

GARNiDELiA – a Japanese music unit consisting of vocalist MARiA, and producer toku. The duo first collaborated on the song “Color”, which was used as the opening theme to the 2010 anime television series Freezing. The name of their unit came from the French phrase “Le Palais Garnier de Maria” (Maria’s Opera), and the moon Cordelia, which was discovered in 1978, the year of toku’s birth.

和-KAZU- – 和-KAZU- has been attracting attention in the world of anime music. On last year, his second CD J-Anison Kamikyoku Matsuri~Legend~[ Kazu in No.1 Fumetsu Mix] was released. In only three months time, 30,000 CDs have been sold. His previous CD J-Anison Kamikyoku Matsuri [Kazu in No.1 Muneatsu Mix] was also a huge hit surpassing 70,000 CDs sold. The series collectively has surpassed an impressive 100,000 CDs sold.

LiSA – is a Japanese pop singer-songwriter. Initially a singer for an indie band, LiSA made her major debut in 2010 singing songs for the anime television series Angel Beats! as one of two vocalists for the fictional band Girls Dead Monster. She performed at Animelo Summer Live in August 2010. In April 2011, she made her solo debut with the release of her mini-album Letters to U. LiSA’s songs have been featured as theme music for various anime such as Fate/Zero, Sword Art Online, Day Break Illusion, Nisekoi, and The Irregular at Magic High School.

motsu x KAYA – motsu (ex:m.o.v.e/ALTIMA) is the party MC who keeps rocking the Anisong and Japan culture events all over the world. KAYA has hyped up the crowds at overseas events using hit medleys from Anisong, VOCALOID, J-POP and dance music. The hottest Japanese Party duo have united to create a fever-pitched experience. This dream team is now available for everyone who wants to dance with the current Japanese music scene.

nano – originally a bilingual YouTube singer, who was known under the alias RogueRouge; later xoxonano from 2006 till 2007 and 2007 till 2009 respectively. She deleted her channels and started on Nico Nico Douga as utaite in 2010. Nano is known for her strong, tomboyish voice. Due to her deep voice, she could be considered a “ryouseirui”. She can sing in both Japanese and English, as she was born in New York. She returned to Japan and because of that, some of her covers are tagged with “The returnee has” (帰国子女が). She also writes English lyrics for the VOCALOID songs she covers, giving them a western touch without losing the original style; therefore, she often tags her songs with “western style” (洋楽っぽく). nano mostly covers VOCALOID but also has covered some Avril Lavigne songs.

yanaginagi – is a Japanese singer-songwriter from Kansai, Japan. Initially, she sang and produced music independently beginning in 2005. Between 2009 and 2011, she was the guest vocalist for the music group Supercell. She collaborated with composer Jun Maeda of Key to produce the original concept album Owari no Hoshi no Love Song released in April 2012. She released her debut single “Vidro Moyō” in February 2012, which is used as the ending theme to the anime Waiting in the Summer.

Top cosplay celebrities from Japan, Singapore, Malaysia and Indonesia will also grace the stage at AFA ID 2015.  A special cosplay championship will be held during the festival with the winner representing Indonesia to compete with the region’s best cosplayers from Singapore, Malaysia, Thailand and Philippines, at the Regional Cosplay Championship.

“AFA Indonesia 2015 will continue it’s legacy of providing Indonesia with the latest trending contents and will also continue to bring Indonesia’s most desired Japanese and international celebrities to connect with fans of Indonesia.  We are very excited that AFA continues to be the platform for continued innovation for Japanese Pop Culture contents in the country, and we aim to push our content offerings to the next level this year.” was a statement released by Shawn Chin, Executive Festival Director of AFA and Managing Director of SOZO, one of the organisers behind AFAID 2015 this year.

Several tiers of ticketing will be available to cater to each visitor’s interest. General exhibition tickets are priced at IDR 80,000* per day, customers who wish to additionally access exclusive stage contents from Anime celebrities will need to purchase the Exhibition + Stage ticket for IDR 180,000* per day.

* Tickets will be available on the day at venue’s official ticket box (details will be updated at a later date.

Tickets will only be available for purchase at www.animefestival.asia/afaid15/ or afaid15.loket.com starting from Thursday, 18th June 2015 at 12 Noon. More info on ticket purchase please contact (021) 920 920 19 or email info@loket.com.

For details on the ticket sales, festival schedule and more, members of the public can visit the official website http://animefestival.asia/afaid15/ 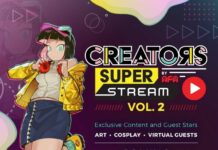