Getter Robo Arc came and went and proceeded to blow everyone’s heads off, both figuratively and literally. I’ve already written in my Summer 2021 season guide as to why this adaptation was a welcome surprise for fans of the series—one fans had hoped for, but something everyone thought was unlikely to happen due to the manga’s premature cancellation, not to mention the death of series creator Ken Ishikawa.

And yet here we are in the year 2021, almost twenty years on after the manga’s abrupt end in 2003, with a 13-episode series that feels like it managed to deliver a satisfying adaptation and reinvigorate the series as a whole. Despite the switch to 3DCG for the robots and the workmanlike quality of the production as a whole, Getter Robo Arc captures the spirit of the series perfectly: a brutal yet contemplative look at free will and fate and whether human beings have power to change it. Rather than trying to cover up it’s weaknesses, Getter Robo Arc made the right choice in playing up to it’s strengths. Director Jun Kawagoe sure knows his Getter.

Adding to that are the cast’s solid performances, whether it’s Yuma Uchida as Takuma (in an uncharacteristically hot-blooded role for the seiyuu), newcomer Arimaro Mukaino as Kamui, or Naoya Uchida returning as an older, grizzled Hayato. Each character gets to have their moments in the short time we do spend with the them, though others, notably Kazuhiro Sunseki’s Baku; unfortunately still suffers from their lack of screen time in the original source material.

However, the show manages to expand beyond the manga to add a few creative liberties that don’t feel out of place. Building on the manga’s abrupt end, the anime goes further and ends on a coda that perfectly encapsulates the themes of Getter Robo, in a “the adventures continue and our heroes will keep on fighting against fate” sort of way.

If it were a review, this is where this piece would end, as Getter Robo Arc has proven itself despite it’s shortcomings to be something worthwhile for old and potential fans alike. But Getter Robo Arc is significant not only in what it is, but also in what it’s not.

Namely, in that it’s not a fully 2D animated mecha anime.

Next page: Another nail in the coffin? 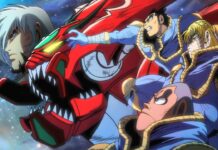 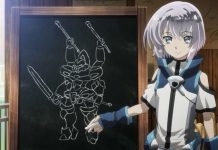