Nineteen years after the end of the brutal war against an alien invading force in Siberia, the world remains in a state of chaos and Earth’s defenders, the Getter Team, remains MIA. Leading a new Saotome Institute to fight against the incoming threat, original Getter pilot Hayato Jin assembles a new force with the giant robot Getter Arc, the late Professor Saotome’s legacy and mankind’s final hope against the invaders. Joining him are Takuma—son of Getter pilot Ryoma, the half-human Kamui, and the monk Baku, uniting their three powers as one by piloting the Getter Arc to carve a way forward for humanity.

Oh boy. It’s been 17 years after the last Getter Robo anime (2004’s New Getter Robo) and every Getter Robo fan will tell you how unbelievably ecstatic they are that there’s a new show, and on top of that it’s an adaptation to Ken Ishikawa’s Getter Robo Arc (2001) manga. Suffice to say, we’ve been waiting for this for a very long time.

So why do so many people get all fired up and hot-blooded when they hear the words Getter and Robo combined? Well, the original Getter Robo (1974) anime was a combined effort by mangaka Go Nagai, his assistant Ken Ishikawa, and Toei Animation to follow up on the success that was Mazinger Z, which sparked the giant robot anime craze. Getter Robo started as a cool children’s show notable for featuring the first combining robot with multiple forms, as anime critic Ryosuke Hikawa puts it. It features three pilots with three machines combining into the Getter-1, Getter-2, and Getter-3 to fight against the Dinosaur Empire’s monster-machine hybrids. But it was the subsequent manga serializations by Ken Ishikawa that cemented the series in its readers’ minds as something more. Continuing the tale in manga form with Getter Robo (1974), Getter Robo G (1975), Getter Robo Go (1991), Shin Getter Robo (1997), and finally Getter Robo Arc, Ishikawa’s manga combined giant robot action, science fiction, biological-horror, and Buddhist undertones to create a brutal bloody epic that was truly unique and his own. Later anime works such as Getter Robo Armageddon and New Getter Robo borrows heavily from his manga version of Getter, as well as elements from his other works such as Kyomu Senki. Getter Robo Arc truly feels like a culmination of every other piece of Getter Robo that came before it, as it also marks the first time one his Getter manga is adapted into anime.

By all accounts, the first episode manages to scratch that Getter itch and does not disappoint. It evokes the feel of an older type of anime, and more importantly perfectly captures Ken Ishikawa’s artwork with it’s heavy use of linework, shadows, and even the goofy-slash-intimidating-slash-intense faces. I was apprehensive of the show’s use of 3DCG for the robots at first, as the robots of Getter Robo lean more into organic shapes rather than mechanical ones (see: the titular Arc’s bat-like wings and demonic visage complete with fangs), but the final 3DCG does a fine work of capturing the weight and feel of these machines, with just the right approach to texturing and lighting. Though on the downside there are moments where character look a bit off and scenes are notably reused, they’re mostly serviceable and don’t detract much from the viewing experience.

It’s here where the veteran expertise of director Jun Kawagoe (Getter Robo Armageddon, New Getter Robo, Cyborg 009 The Cyborg Soldier) really shines, as having directed so many giant robot shows, Getter, Go Nagai-based anime and other similar anime in that vein, he knows exactly just how everything should be. A Getter anime should look like this. A Getter anime should sound like that. A Getter anime should of course, have it’s opening and ending themes song by JAM Project, with the ending sequence featuring art from Ishikawa’s manga. No man is better suited for the job, and this is a perfect example of how even with a limited production, a director and team that intimately knows the source material and how to work with it can produce outstanding results.

Of course, the question on everyone’s minds is how faithfully will Getter Robo Arc adapt the original manga? Sadly, Ken Ishikawa passed away in 2006 and left the manga, which went on hiatus in 2003, unfinished. This isn’t the first time director Jun Kawagoe has worked with this kind of material, as 2001’s Cyborg 009 The Cyborg Soldier also concluded with an open-ended ending based on source material that never got a proper conclusion. While it remains to be seen if Getter Robo Arc will end on a similar note, there’s still much for fans to rejoice for as right now Getter is finally back again, with a vengeance. It is, simply put, everything a Getter Robo fan could ask for. 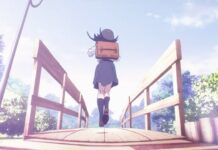