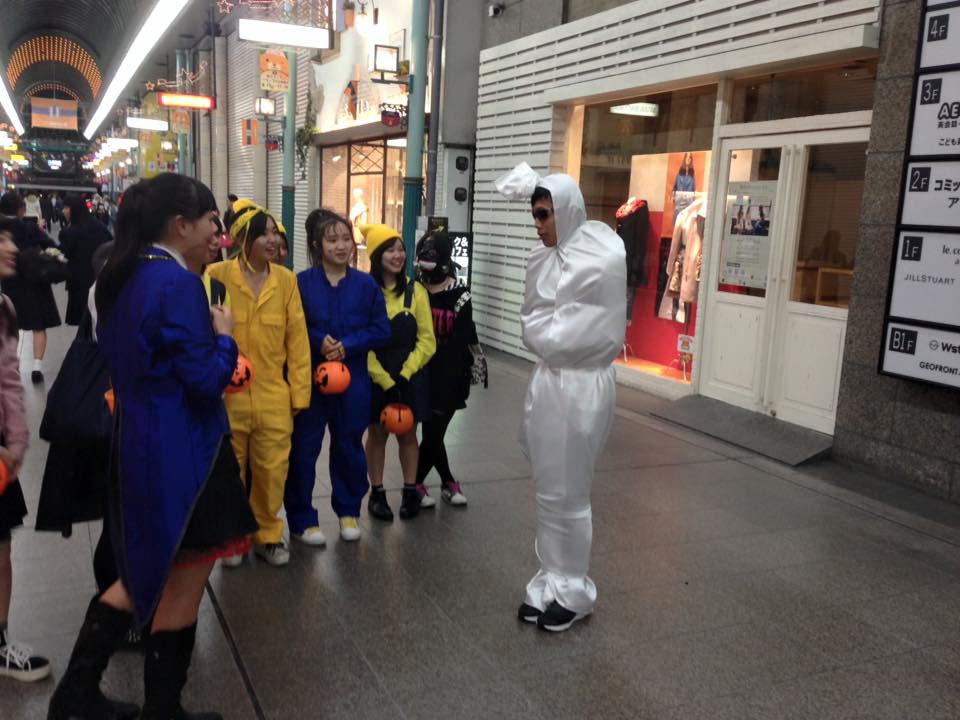 While Halloween is not really celebrated in Indonesia, the practice of wearing costumes for the occasion has been spread to Japan. Among the various costumes that can be seen in Japan on this year’s Halloween, one that particularly caught attention for Indonesians was a man who dressed up as a pocong, a ghost that is well known by Indonesians. The pocong-costumed man was spotted at a shopping district in Matsuyama. Who is this man who wears the pocong costume in a foreign country like Japan? KAORI found out that he is an Indonesian named Gilang Khairuzzaman, who is currently working in that region. He also happens to be a member of Ita Indonesia, a community of itasha (cars decorated with anime and game characters) enthusiasts. Gilang confessed that he actually did not plan to dress up as pocong and did not prepare anything for Halloween this year. He said that “the idea to dress up as pocong came to me spontaneously. I thought to myself that I should try it because the costume is easy and I can introduce ghosts from Indonesia here in Japan.” He also recounted the challenges that he had to face when wearing the pocong costume. “I wore the costume at the time when the temperature is below 11 degrees Celsius (51.8 degrees Fahrenheit), and I have to move by hopping with bound legs for 1.5 kilometers (0.93 miles).” Despite the struggle that he had to go through, he feels happy and satisfied upon the response of local Japanese residents to his costume. “There are a lot of people who wanted to take pictures with me. Some even asked me if I dressed up as a walking dakimakura (hugging pillow). I laughed upon the question then explained about the ghost that I dressed up as.”

A pocong is a type of undead from Indonesian/Malaysian horror lore. It is based on the burial practice of the countries’ Muslim inhabitants, who wrapped the body of a dead person with white cloth (kain kafan). It is said that if the ties that wrapped the cloth to the body are not released, the body would leave the grave to ask people to remove the ties. Pocong has become a staple of Indonesian horror films, TV shows, and pop culture in general for decades. The “bullet hell” shooter game INheritage: Boundary of Existence, made by Bandung-based game studio Tinker, featured monster based on pocong as one of the opponents.

Take a look at photos of Gilang in his pocong costume below: Will more Indonesian ghosts and monsters show up in future Halloween celebrations in Japan? Time will tell.