On their Facebook page, Encore Films Indonesia posted a picture along with a caption which hinted that A Silent Voice anime film will be screened in Indonesia. Detailed information regarding the exact release date and the cinemas that will screen the film has yet to be announced. But from a reply in the comments of the post on their instagram account, the film seems to be aimed to debut on 3 May 2017. 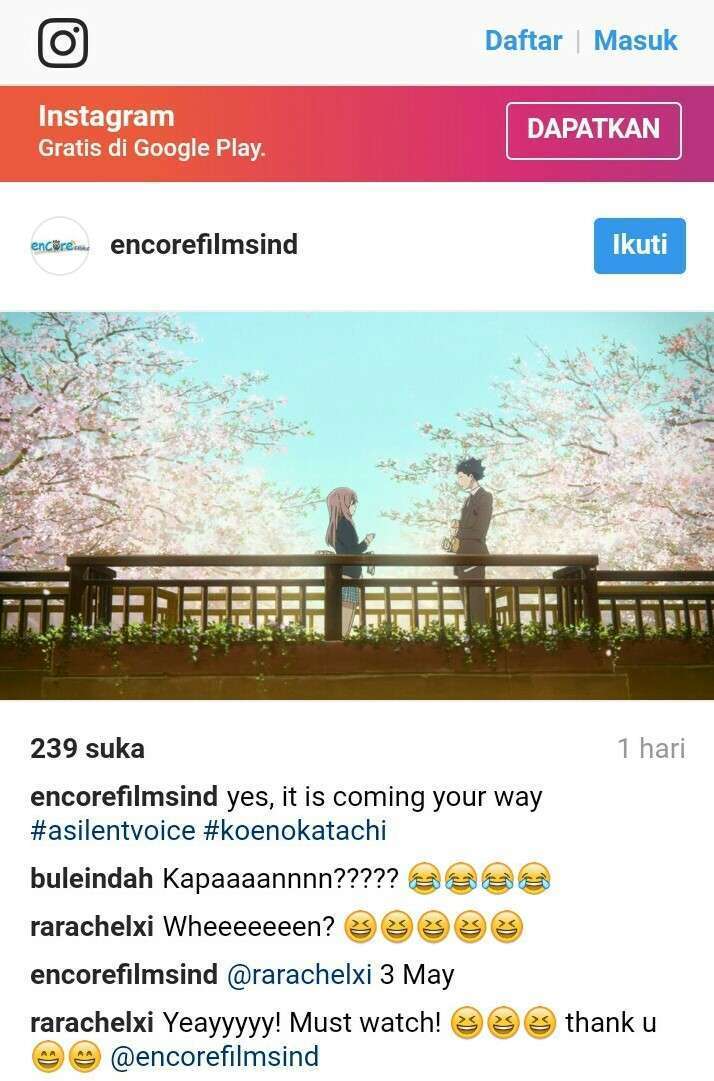 Adapted from a manga by Yoshitoki Oima, A Silent Voice (Japanese title: Koe no Katachi) tells the story of Shoya Ishida, who initiated bullying to a deaf transfer student named Shouko Nishimiya. But after a certain incident, Shoya suddenly became the new bullying target. Seeing him bullied, Shouko showed her sympathy, which only led to a quarrel between them. Later, Shouko transferred to another school without saying anything. Tormented over his past, Shoya decided he must see Shouko once more.

A Silent Voice had been published in Kodansha’s Bessatsu Shonen Magazine as a one-shot in 2011. After receiving an award and positive reception, Oima remade this manga as a series which was serialized in Weekly Shonen Magazine from August 2013 until November 2014. Kodansha had also collected the serialized manga into seven volumes.

In Indonesia, the manga is licensed by m&c!. The publisher had completed publishing all seven volumes of the manga under the title The Shape of Voice.

Opinion: Naoka Ueno and the Reality of Social Interaction

A Silent Voice Debut in Indonesia Scheduled for May

Ao Haru Ride will be Released in Indonesia

your name. will be Shown in Indonesia?

Bandung Plans to Have 30 Creative Villages in the Next 5...