Shishiku Academy is a high school where all the badass students belong. At Shishiku Academy, the male students like to fight with one another to prove who’s the best and strongest among them. One day there was a new student enrolled at Shishiku Academy, a girl named Hinako who disguises herself as Hikaru Onigashima, the younger brother of the legendary badass Houou Onigashima.

The first episode of this anime presents the introduction in a no-holds-barred badass way, with the students trade their fists with one another in the entrance ceremony to decide who is the strongest among them. Aside from the badass and punk school setting, there is one interesting thing in this first episode, which is the theme of what if a girl disguises herself as a boy enrolled in an all-badass-boys school? The story gets more interesting when this girl can actually beats boys in a fight. In this first episode, there’s obviously a reverse harem narrative set up about a girl among the badass boys. Kenka Banchou Otome is recommended for you who likes badass handsome boys or for you who likes to see how the reverse harem romance will be presented in a badass way. 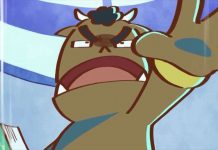