Muse Asia is a Singapore-based Youtube channel created by Muse Communication Singapore, an active branch company of MUSE Communication Co., Ltd. The channel has streamed various anime legally on Youtube for South-East Asia audience with English subtitle. Other than Muse Indonesia, Muse Asia have also created other country-specific Youtube channels Muse Malaysia or Muse Thailand. Just like in Indonesia, those channels stream the anime with subtitles in their respective languages. 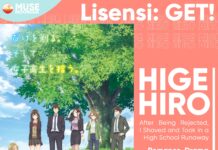 Muse Indonesia Licensed “HIGEHIRO: After Being Rejected, I Shaved and Took in a High School Runaway”