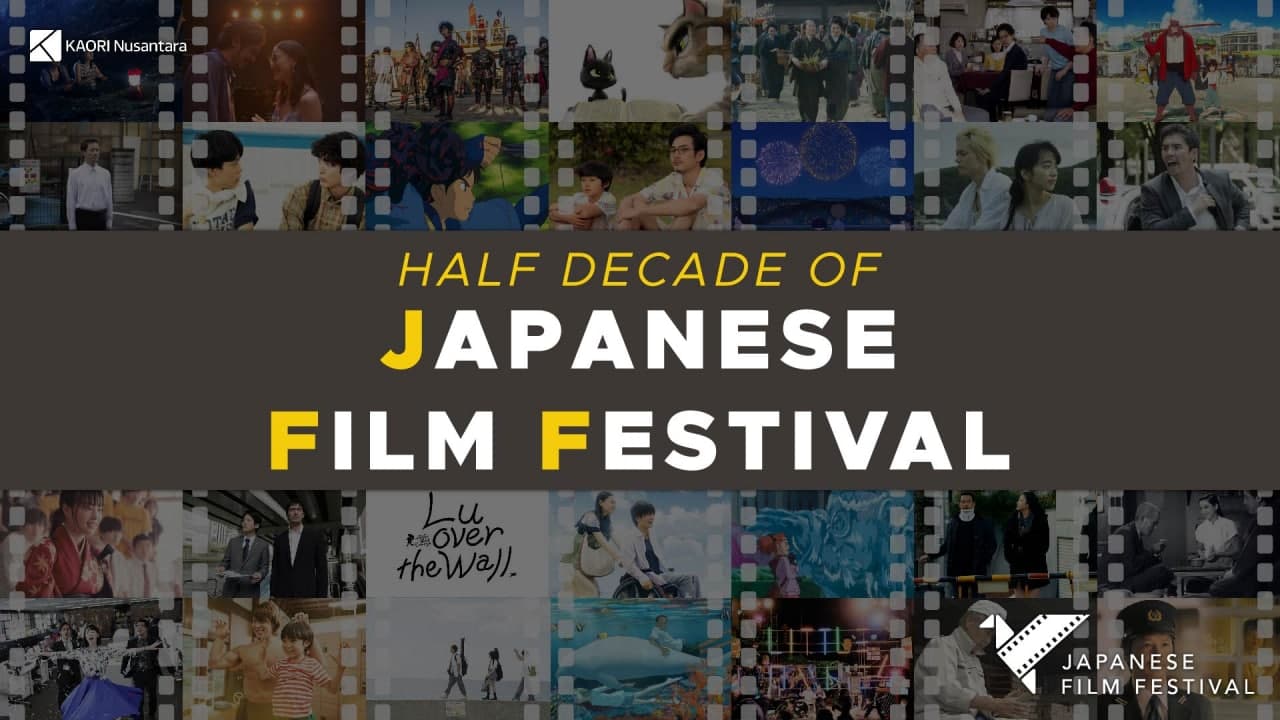 2020 marks five years since Japanese Film Festival (JFF) was first held in Indonesia. Presented by the Japan Foundation, the event was held for the first time on 26 November 2015 in Jakarta. Eventually, the event has also been held in other cities like Surabaya, Bandung, Denpasar, Medan and Makassar in the following years. Unfortunately, this year’s iteration has to be moved online due to COVID-19 pandemic.

As a media that also covers Japanese popular media that are available in Indonesia, KAORI Nusantara has also reported the event ever since its first iteration. Many KAORI staff have attended the event, both as regular viewers or as for doing reporting. The event has left a lot of impressions for them, and some of KAORI staff  have shared their experiences with the event.

Here are the comments from KAORI’s staff:

JFF 2019 in Bandung was my first JFF, and I hope this pandemic isn’t going to make it the last. I was quite excited to see what JFF was like, and I had seen a lot of people who regularly engage with Japanese contents through education or culture. The ticketing desk in the Bandung venue was crowded and there was a display showing the films line up along with information on them.

One thing that made an impression on me was a teacher of Japanese who brought along students to watch the films. There were also members of Japan-themed club coming to the venue together. The film itself made another huge impression on me because it was, somehow, relatable: it feels like I’m reviewing my study, as I have written in my review. In celebrating five years since JFF was held in Indonesia, I hope although the event will be held online in 2020 because the pandemic, the enthusiasm that I had seen in the previous year will not go down.

Favourite Film: One Cut of the Dead

JFF has always been a yearly treat, and I have such fond memories of it. Getting the chance to view movies you wouldn’t have otherwise been able to see in regular theatre screenings is something I look forward to, and it’s because of JFF that I’ve been able to watch seminal works such as Godzilla (1954) and Yojimbo (1961) in a theatre setting. But my favourite memory would undoubtedly be of going blind into a screening of One Cut of the Dead with the film’s cast. We roared in laughter, gasped in awe, and stood in ovation. Getting to meet your new favourite movie for the very first time is a very special experience, and JFF gives Indonesian moviegoers a place where those one-of-a-kind encounters with outstanding works (you wouldn’t normally see in normal theatre screenings) can happen.

I first attended the event in 2019. I live in Malang, East Java, so I never had a chance to attend the event before when it was held only in places such as Jakarta and Yogyakarta. But 2019 was special because, finally, the event was also held in Surabaya, the capital of East Java province. I still had to take two hours journey from Malang, and since I coudn’t miss my work, I also could not attend the Friday film sessions and the Sunday night sessions (I have to wake up early on Monday). I’ve attended many film festivals before in Malang, but this was my first time attending a film festival in another city.

How about the event? Well, one of the great things about any kind of film festival is sometimes we can see a film that we never heard about, but genuinely surprises us when we watch it. The only film from the line-up that I had prior knowledge of was Ayumu Watanabe’s Children of the Sea. Unfortunately, that film only screened once on Sunday night so I had to look for other films. Luckily, the other films that I watched managed to leave strong impressions on me. 12 Suicidal Teens is a whodunnit mystery that treats its story structure as a puzzle. Dance with Me is actually relatable for me (and also funny too). Humba Dreams was the only Indonesian film I have watched in the event and reminds me a lot of the art films that I used to watch when I was still active in my university’s film club.

Out of the films that I have watched, I have two personal favourites. The first one is Little Love Song. It’s the one film which surprised me the most because I thought it’s just an interpretation of Mongol800’s love song, so I expected it to be a simple romance film. Turns out it’s actually the most political film that I watched at the festival, which discusses the friendship of people from different nationalities and the issue of U.S army base in Japan. My other favourite is Masquerade Hotel. Imagine a two and a half hour whodunit mystery where the mystery only happened in the last 30 minutes and the rest of the film is a discussion about the etiquette of hotel employees. Also, Masquerade Hotel’s style reminds me of Wes Anderson’s film, with a lot of symmetrical look and shoots where the character is perfectly placed in the centre of the frame. It’s such a shame that COVID-19 pandemic means I can’t watch the film directly in the cinema this year, but I’m still looking forward to this year’s JFF online event.

Favourite Film: One Cut of the Dead

I only attended the Japanese Film festival once, and it was the 2018 iteration in Jakarta. In that year, the JFF in Jakarta is held together with Japan Cinema Week (Pekan Sinema Jepang) to celebrate 60 years of Japan-Indonesia diplomatic relations, and because of that, there were some films that weren’t screened in the other cities. I watched two films, One Cut of the Dead and One Week Friends. I had watched One Cut of the Dead before in a regular theatrical screening, but during the screening at JFF Jakarta, the film was the opening film so the theatre was packed with more people. It made the film even funnier because there were more people laughing together at all the jokes and the atmosphere became livelier.

What also made me amazed was the response from the film’s stars. Since it was the opening film, some of the film’s casts came to the screening. They were astonished seeing the audience’s response to the film, seeing them laughing out loud with every punchline. When they were called on-stage, the audience gave them huge applause and some of them look really touched.

To be continued in page 2