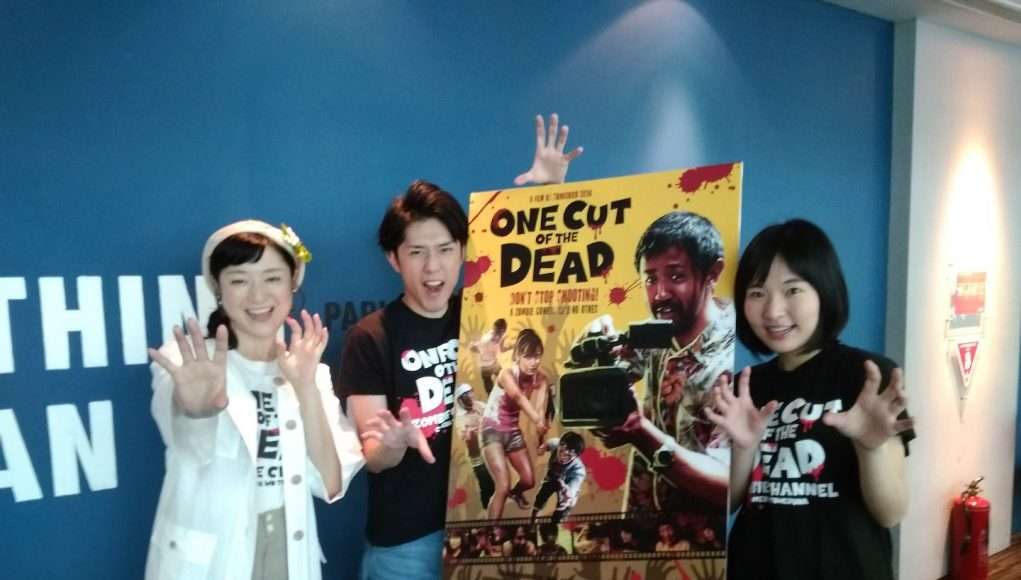 Last December, director Shinichiro Ueda’s surprise hit film One Cut of the Dead has been screened at Indonesian cinemas. Produced from a workshop at the acting and directing school ENBU Seminar, this film became a massive success both in Japan and overseas. In Indonesia this film had been screened as part of the Japanese Film Festival Indonesia and Japan Cinema Week in 2018, while also getting a regular theatrical release at CGV Cinemas Indonesia and Cinemaxx by distributor Moxienotion.

Read more: One Cut of the Dead Review

During Japan Cinema Week in Jakarta, three members of the cast are present in the opening ceremony on 7 December. They were Harumi Shuhama as the make up artist (also known as the “POM!” lady), Kazuaki Nagaya as the male lead, and Sakina Asamori as the cameraman assistant. One of KAORI’s staff also received the opportunity to interview the casts.

This film started through a workshop, but then this film surprisingly became so successful not only in Japan, but also overseas. How do you feel about this?

Shuhama: Honestly, we are also surprised with this film’s success. It feels amazing, really.

The actors and actresses in this film are newcomers who made their feature film debut here. Do you have any other experience in the entertainment industry before participating in this film?

Shuhama: Fortunately, many of the cast members in this film have experience performing stage plays. So it was not really that hard to act on set.

Nagaya: I actually had acted in some other films as an extra.

Asamori: Me? I used to be a locodol (local idol).

So you already have experiences from other films, from theatre, and from the idol industry. Can you tell us how you get involved with this film?

Shuhama: Ah, it’s a long story. So, I had an acquaintance, and this acquaintance knows other another person who knows the director of this film, Shinichiro Ueda. When I first met Ueda-san, he told me about the film workshop and the audition. I just joined anyway without thinking too much.

Nagaya: I just took part in the audition and Ueda-san accepted me.

Asamori: The audition was held in ENBU Seminar Film School, the school where Ueda-san graduated. After we met, I think we had some kind of “chemistry” and I felt that the project could lead to something interesting.

Let’s talk about the film itself. One Cut of the Dead‘s narrative is really unique compared to other films. There are two stories here, one is the one-take no-cuts part and the other is the “behind the scenes” part. Did you find it difficult to create a film like this?

Shuhama: Yeah, we needed to rehearse for months before shooting, especially to create the one-cut part.

How many takes did you need to do that part?

Are there any funny moments that happened while you were shooting the film?

Nagaya: In the one-cut part, There is a zombie character played by a drunk guy (Manabu Hosoi’s character). He was supposed to act like a drunk. But during the filming, he was actually drunk for real. Every time the effect from the booze effect had weakened he would drink again.

Shuhama: There is a scene where I needed to slap another character. But after many takes, we still could not get a good footage. Finally the director said, “look, we need to conclude this scene. Just slap as hard as you could.” We finally got a good shoot, but the actor got a pain on the teeth for real.

Asamori: There are many things that were not planned in the script which made the shooting more interesting. For example, in the chase scene where I slipped and fell, it was unscripted. But it happened and thanks to that, I got more screentime. Before the shooting, the director also said “I think it will be interesting if you slipped.”

Since you acted in a zombie film, I’d like to ask if you have watched any zombie films before?

Asamori: Never. I am scared of that kind of films.

Well, I actually like a zombie anime called Gakkou Gurashi! (School-Live!), which is about high school girls in zombie apocalypse.

Asamori: Oh, I’ve heard of it. It’s getting a live action adaptation, right?

Yes, it is. It’s debuting January next year, I believe.

Asamori: The lead asctress is a member of Last Idol that Akiyama-san produced, isn’t it?

Ah, yes. I used to watch their shows.

Asamori: I also follow them since they’re also part of Japanese Pop Culture.

Returning to the topic of the film production, the cast members in this film also come from various age group and backgrounds. How did you build chemistry with each other?

Shuhama: Many said that One Cut of the Dead is a film that was “created together by its staff and casts”. I genuinely agree with that. It feels like being a part of a family. Even after the production ended, we still travelled together, promoting this film everywhere. I think we have met and travelled more than 100 times already. That’s why we feel so close together.

Last Question, is there anything that you want to say to One Cut of the Dead viewers in Indonesia?

Shuhama: Indonesian people really love comedy, though sometimes they appear to be still shy to show it. So I am really happy to see so Indonesian viewers laughed while watching this film. Some of them really gave a huge laugh. I felt really touched when I saw that.

Nagoya: If you have not seen this film yet, just see it. Please don’t leave your seat after the one-cut part. And please stay until the film is really finished because the real end credits contain behind the scenes shots taken by the real director. Also, please watch this film two to three times.

Asamori: I also saw some viewers left their seats after the 37 minutes-long one-cut scene. It’s just a fake credit roll. For those who do not like zombie films, please do not worry because I also don’t like them. But there are so many funny scenes in this film and the end result is really good. So please watch this film until the end.