Akebi Komichi lives out in the countryside with her family. She’s won entrance to the prestigious Roubai Academy middle school for girls and now she wants only two things—to wear the school’s sailor uniform and to make a hundred friends! (Source: bilibili)

So, here are the three key phrases from the first episode: mono no aware, character animation, and innocence and insecurity. Yes, I put “innocence and insecurity” as a single phrase here. In fact, the first episode of Akebi’s Sailor Uniform reminds us that our sense of insecurity may originate from our innocence, from our lack of knowledge that leads to our unnecessary fear. It makes us treat something unknown as something that induces insecurity, not curiosity.

Even though Akebi’s Sailor Uniform is not a pure iyashi–kei, I found a lot of similarities between this show and something like Aria or K-On!. This is an anime that appreciate its moment. The moment here is the daily life of Akebi around the time she enters middle school. Everything about them is just beautiful, from the part where her mother sews the sailor uniform to the day when she finally wears it. It is animated beautifully. I genuinely appreciate how much effort that the animators put into the story that is about something as mundane as a story about a girl who is excited about wearing a sailor uniform. But her affection, her innocence, is as graceful as the body language and animation of the fabric shown in the first episode.

But the interesting part comes in the second half when Akebi finally finds out that her school uniform is not a sailor uniform, but a blazer. The conflict comes not because she is prohibited from wearing the sailor uniform; on the contrary, she’s allowed to wear it. She has a choice to wear something that she likes, but she’s afraid to be branded as “different”. This is a strong message—while other people may already encourage you to pursue something that you like, that doesn’t mean the insecurity will just go away. I think the anime accepts that insecurity will always be there, and we should accept it with a smile. When we accept that insecurity, that’s when we move forward.

In the end, Akebi moves forward. Our real world may not be as kind as Akebi’s. However, this anime reminds us that whatever the situation, insecurity will always be there. Akebi-chan’s Sailor Uniform is an optimistic exploration of our insecurity in a simple, daily life situation. Maybe your situation is different from Akebi but I think it’s easy to relate, especially when the animation successfully captures that mundane scenario in a beautiful way. 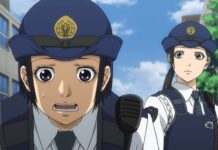