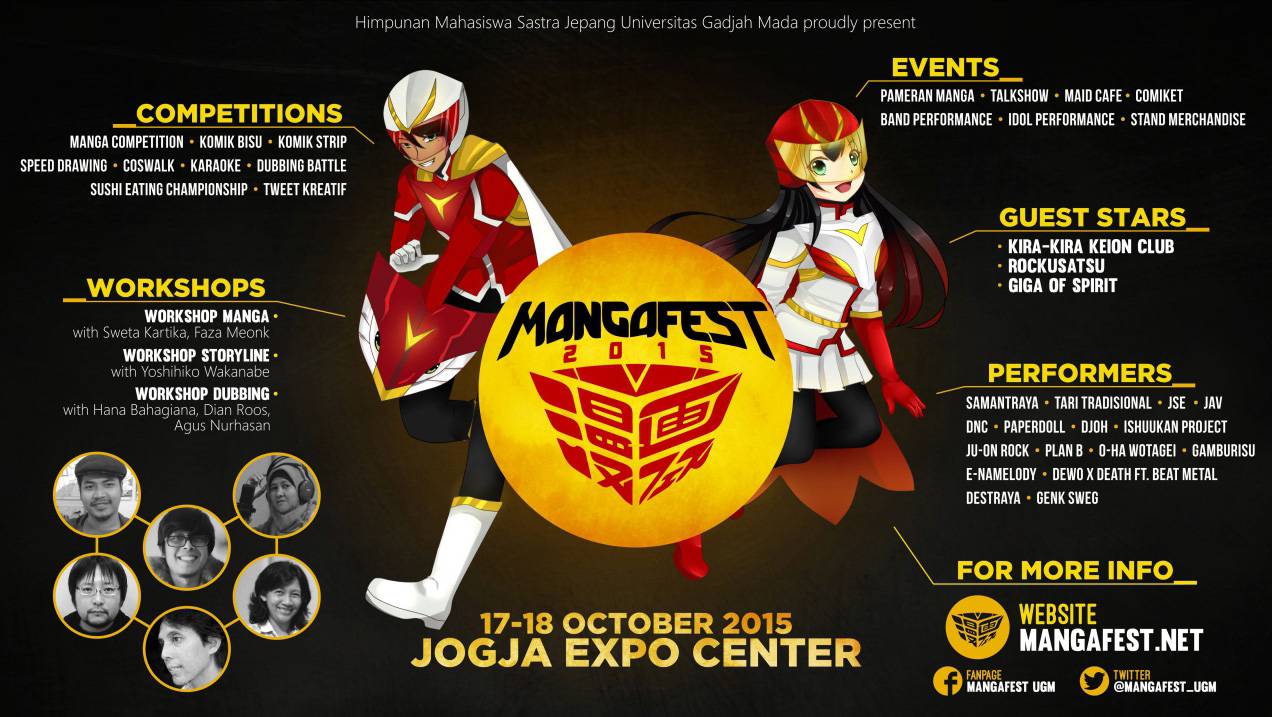 Recently, MangaFest was held in the city of Yogyakarta (also known as Jogjakarta or Jogja for short) for the fifth time. This annual manga (comic) festival is organized by the Japanese Literature Student Association of Gajah Mada University. This year, MangaFest was held on October 17 and 18, 2015, in Hall B and Hall C of Jogja Expo Center (JEC). MangaFest is well-known for its concern for Indonesia’s creative industry. MangaFest presents a mix between Indonesian and Japanese culture through manga by inviting expert mangaka (people who draw manga) from both countries. Aside from manga workshops, this event also offers various interesting sections, such as Comiket, merchandise booths, comunities booth, and Foodventure.

KAORI observed that the visitors who came to the venue are enthusiastic. The amount of visitors visibly increased on the second day (Sunday), as the queue at the ticket box remained until 1.00 p.m., even though the event had started since 9.00 a.m. Entering the hall, visitors can take a look at a gallery of the creations of Manga Competition and Silent Manga Competition participants. These competitions were made to distinguish potential manga creators in Indonesia, as well as a media to express their opinions on national issues that were picked as the theme of the competitions. Visitors were also asked to give scores on those comics by putting a strip of their tickets in the box on the wall. The winners were announced at the end of the event. The winner of the Manga Competition is the duet of Bayu Edvira Paskalis and Lanang Putro Raharjo with their entry, “Mbak Narator” (Narrator Lady), while the visitor’s choice title goes to Muhammad Syaiful Ghozi with his “Orange Head”. The Silent Manga Competition has four categories for winning entries, one of which is the Best Choice award obtained by Ozora Rahayu with his entry, “Benih” (Seed).

On the east side of the venue, was the stage. The stage programs included band performances, talkshow, dubbing battle, coswalk (cosplay catwalk) and karaoke contest. There were also traditional dance performances from Grup Tari Sastra Nusantara, Samantraya, and Domba Nini dance.

On the first day, visitors crowded the stage area around 6.00 p.m. That was when the Kira Kira Band performed several songs that are familiar to Indonesian anime fans, such as Ikimono Gakari’s “Blue Bird” and “Pegasus Fantasy” from the ‌Saint Seiya series.

On the second day, the stage area became more crowded. Performing on the stage were DxD feat Babymetal which covered songs of female metal group Babymetal, Ju-On Rock which performed song from the band One Ok Rock, as well as Giga of Spirit with their death metal performance. Even until the end of the event at night, the crowd is still enthusiastic to see a local idol group called E-Namelody, and the band Rockusatsu that performed old Japanese songs with rock style.

In the dubbing battle, participants prepared their own videos of Japanese shows and then they performed their voice overs to the videos in Indonesian. The judges from this competition were professional voice actors/actresses who were experienced in dubbing movies for showings on television. Those judges were also speakers for the dubbing workshop.

Various communities were hosting their stands in the event. They include S.H. Figuarts Jogja (a community of Bandai action figures collectors), Kameko Jogja (cosplay photographers), NKC 1948 (Kantai Collection fan community), and even traditional games communities like shogi and mahjong. The communities interacted with the visitors by offering them to take part in their activities at their booths.

Some booths also sold various merchandises, such as shirts, jackets, keychains, stickers, posters, and so on. There were also booths that sold action figures imported from Japan.

In the Food Venture section, the booths served familiar Japanese dishes such as takoyaki, ramen, okonomiyaki, and others. There were renown franchises specializing in Japanese food such as Asagaya, Sushi Story and Hoka-Hoka Bento. Not only Japanese food, visitors can also satisfy appetite for Indonesian dishes. Among the booths that offered Indonesian food are Bakso Barokah Pak Min (meatballs), Dawet Ayu MH (traditional drink), and Es Teler 77 (shaved ice and traditional dishes). As to be expected from a Japanese pop culture event, there is also a Maid Cafe.

As MangaFest is concerned with promoting the development of Indonesian creative industry, the Comic Market is a core part of the event. Over 60 circles showed off their artworks, self-made merchandises, and even self-published comics. The themes varied from fanarts to completely original works. You could also get a sign from the creator in some booths. Professional comics publishers such as re:ON, Shonen Fight, Bentang Komik, Roket KMI, and Gramedia also made their presence. Some foreign visitors can also be seen wandering in the Comic Market area.

MangaFest also hosted workshops with professionals in their respective fields. On the first day, there was a storyline workshop presented Yoshihiko Wakanabe, the editor-in-chief of local comics magazine Shonen Fight. A dubbing workshop was held on the next day with professional dubbers Hana Bahagiana and Agus Nurhasa, as well as translator Diana Roos. These three were also the judges of the dubbing battle. On the same day, there was also a manga workshop with Faza Meonk, the creator of famous comic character Si Juki, and the creator of Grey and Jingga comic strips, Sweta Kartika, as the speakers. Yoshihiko Wakanabe was also featured in a talkshow along with Ario Anindito and Mukhlis Nur. A couple of Indonesian comics, Cendan and Elang Bondol were also launched at this event.

Overall, MangaFest 2015 managed to gather a lot of people, and the visitors seem to be pleased with the event. It fulfilled its promises to support Indonesian creative industries with significant presence of local contents. MangaFest was also able to accommodate various groups of Japanese popular culture fans. With a large hall as its venue, weather was not a big issue, an improvement from last year’s festival where some events were held on open space. The event went successfully without much problem and the visitors were very enthusiastic.

See you at next year’s MangaFest!