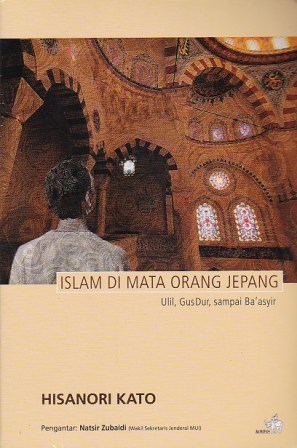 There is an anecdote about how Indonesian and Japanese see religion: “For Indonesians, religion is work, but for the Japanese, working is religion.” Indonesians are said to put all of their activities for the sake of God, while the Japanese work to their hardest effort as if working is their only faith.

It is through that contrasting attitudes to religion that Hisanori Kato began the prologue of his book, Islam di Mata Orang Jepang: Ulil, Gus Dur, sampai Ba’asyir (Islam in the Eyes of a Japanese: Ulil, Gus Dur, to Ba’asyir). In Indonesia, religion is placed in the highest position. Schools taught it as a compulsory lesson. Political parties use it as an “ideology.” There is even a Ministry of Religious Affairs, a ministry that handles all public religious activities in this country. Although Indonesia is not a country based on a certain religion, it is sure that Indonesian people are really bound with their faith.

Whereas religion in Japan, Kato wrote, is something that is “really impossible to become the topic of a conversation, except in history lesson.” It is a fact that schools in Japan doesn’t teach religion in their classes. Also, while Japanese often associated with Buddhism and Shinto, most of them claimed as an atheist. As for Islam, Japanese just know a little about it compared to Christianity.

Because of this background, Kato always wonders why muslims should pray five times a day, or why they should fast in a month every year, or why they can’t drink alcohol or eat pork. These questions lead him to study more about Islam, especially the one in Indonesia. Kato, who was a Japanese Bachelor in Philosophical Studies continued his studies in the University of Sydney, and researched about Islam in Indonesia and its impact to the society. He has been living overseas for several years, and has lived in Indonesia for 7 years. With that experience, he started to write this book while also doing his research.

This book is a compilation of his interviews with some Indonesian Islamic figures who posses different backgrounds from each other. Three people mentioned in this book’s title (Ulil, Gus Dur, and Ba’asyir) represent their differences. Ulil Abshar Abdalla is a liberal Islam activist who campaigned about a concept of Islam with liberalism. Gus Dur or Abdurrahman Wahid is the fourth Indonesian president, also a Nahdlatul Ulama Islamic scholar, who is famous because of his policy of tolerance to people of different faiths, particularly exemplified by the state acknowledgement of Chinese Confucianism during his period as president. Abu Bakar Ba’asyir, on the other hand, is an Islamic fundamentalist and also the leader of Majelis Mujahidin Indonesia (Indonesian Council of Mujahidin), who is often associated by media with acts of terrorism in Indonesia

Through meeting these people, Kato tried to explain what is Islam and its role in Indonesia. That’s why he met with people with various ways of understanding Islam. He tells of his experiences when talking to them, sharing ideas, and even telling jokes. What is interesting is that all of these people warmly welcome him, even though they know that Kato is not a muslim. Even when he met those who are often considered as “Islamic extremist,” he was treated as an important guest.

This book is an opinion of Hisanori Kato about Islam in Indonesia, based on his own experience meeting these people and also living in Indonesia for several years. He also tries to compare it with some conditions or events in Japan, and from this we could get a unique perspective of seeing Islam. The contents are presented not in rigidly academic manner, and it uses a simple narrative-styled language so that it is easier to understand by anyone. For me, it feels just like reading stories of people who see Islam in various ways.

Generally, I see that this book aims to educate people that Islam is not a religion of violence, and to not always associate Islam with terrorism. The true teaching of Islam is to become a good people and create a peaceful society, and it is revealed by talking to these people whom Kato interviewed. It is a good reference for those who want to know more about Islam in Indonesia and wanted to try different perspective, since most of books related to Islam are often written by Islamic scholars or Western orientalist. By reading this book, we will be given a story of the real Indonesian Islam, and from this we could see how they tried to become “a good Muslim” in their own ways.