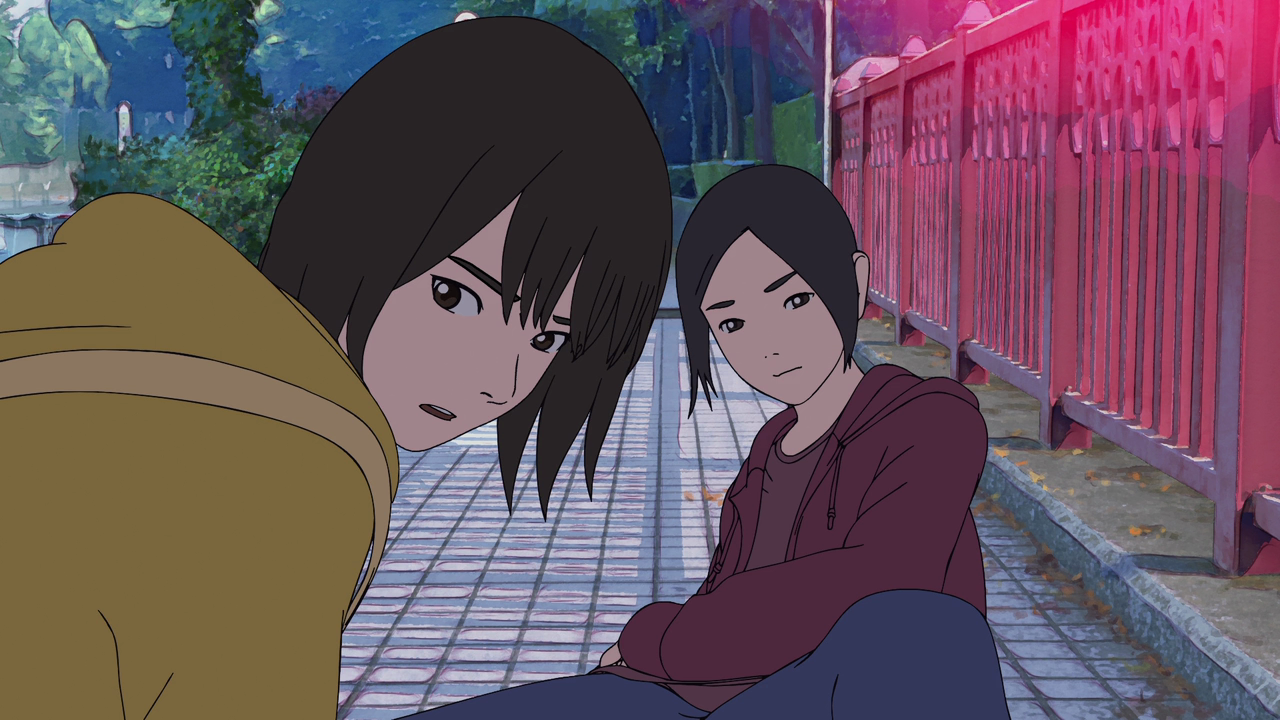 The Case of Hana and Alice (Japanese title: Hana to Alice: Satsujin Jiken) is a prequel to a Japanese live action movie titled Hana and Alice which was released in 2004. While the live action movie tells about the daily life of Hana Arai (Hana) and Tetsuko Arisugawa (Alice) and their “complicated” love story, the prequel tells about their first meeting back in middle school. At that time, Alice is a transfer student who is being bullied by her classmates because of a petty reason: she sits on the desk that formerly belongs to an upperclassman named Judas who suddenly vanished a year ago. Rumor said that Judas was killed by another Judas. Judas also have four wives, each of whom was also named Judas, and the Judas that kill him is one of the wives. Alice investigates this Judas to brought an end to the the treatment she received from the classmates. In the middle of her investigation, she meets Hana, a former classmate of Judas who becomes a shut-in. Hana, after learning about the rumored death of her former classmate, decides to help Alice. This movie is directed by Shunji Iwai, who also directed the live action movie and also voiced by the lead actresses of the original live action movie, 29-year-old Yuu Aoi (live-action Rurouni Kenshin films, Tekkonkinkreet, Redline) and 27-year-old Anne Suzuki (Steamboy, Pokemon 4Ever, live-action Initial D). The unique thing is, this movie uses rotoscoping technique, which uses live action footage played by the original actors and trace it frame by frame to make animation

Rotoscoping has been used to make anime in a number of cases. Some anime use rotoscoping at certain scenes for specific purpose. Kids on the Slope (also known as Sakamichi no Apollon) for example, used rotoscoping in jamming scenes to create a fluid action of characters playing musical instruments. Subete ga F ni Naru: The Perfect Insider, used rotoscoping to create the opening sequence where the two lead characters, Saikawa and Nishinosono, dancing and at the same time trying to chase the other lead character, Magata. But the most famous use of rotoscoping in anime in recent memory probably come from Flower of Evil (also known as Aku no Hana), where the whole anime is created through rotoscoping to make the it more realistic. Though they intentionally leave out some details like shading to make the animation look incomplete, adding scary atmosphere to already realistic animation.

The Case of Hana and Alice, on the other hand, used rotoscoping to emphasize more natural feeling to it, giving it the mood of daily lives. This suits the story really well. The mystery aspect is still there, but it is light compared to other mystery stories. This is not kind of mystery with a heavy story or mind bending plot twist. It feels more lighthearted, like Hyouka, but with no Oreki or other typical sleuth role. In fact, the anime shows what would have happened if ordinary simple minded middle schoolers play detective. Hana and Alice are just ordinary young girls who happen have a problem and try to solve it by themselves. Their characters and their journey to face their problem are the ones that make the story interesting. It feels down to earth and believable. Unlike some mystery stories that sometimes feel over the top and exaggerated.

The rotoscoping technique also lets the director, Shunji Iwai, experimenting with his movie. As a director, Iwai is more familiar with live action. Rotoscoping allows him to do some experiment when recording in live action, then trace it to animation to make the movement more realistic. The slow motion parts, for example, looks like they were recorded with high speed camera before slowing it down in editing process.

The other example is the opening scene where Alice do ballet dance. In this scene, Iwai not only apply rotoscoping on the character movement, but also the whole room. Then he made the camera move following Alice’s movement, give dynamic camera movement into depth that rarely seen in other animation. While this made the art looks simpler it also gives unique impression to viewers, subtly say they will see something different than any other animation

Rotoscoping also helps other aspects in movie. Sound directing, for example, gets some benefit from this technique. Unlike other anime where the V.A recorded their voice separately in a studio, in this movie, the actor recorded their character directly in live action shooting. It makes the voice acting seems more alive. The dialogue of two or more character sounds more natural. Their intonation, volume, tone, are beautifully acted by the performers in front of the camera. These elements give more realistic vibe to the movies and make it more alive. The background art also given special touch. The Background art feels like a photo that transformed into beautiful watercolor background. Unfortunately, sometimes to accomodate the dynamic movement of camera the background art change to computer generated 3D image that make it feels out of place

Also, with rotoscoping , 29-year-old Yuu Aoi and 27-year-old Anne Suzuki are able to portray two middle schooler characters. Alice is a normal transfer student who was bullied for inexplicable reason. Moreover she also have her own issue in her home, where she only live with her divorced mom and rarely meet her father. Meanwhile Hana is a shut in student who refuse to go to school for almost a year without saying any reasons, making her mother worried. But when she heard from Alice about the “murder” of his former classmate and the rumor around it, she become interested and choose to help. The story of these two is what make the story enjoyable. Iwai’s script manage portray the problem of these two and how they solve it. Unlike the sequel, The Case of Hana and Alice have the “murder” case to keep the story forward. The case is weird, but it it’s not so complicated. The case also serves as a catalyst to develop the two main characters and also connect them. Especially Hana, a shut in who cannot trust the other easily. Here you can see these two bonding in their journey to uncover the truth behind Judas, featured with some funny moments and silly mistakes in their adventure as amateur sleuth.

In the end, rotoscoping allows Iwai to make an engaging story about how Hana and Alice met and fight their own struggle. The mystery is simple, and sometimes feel absurd and stupid, yet it successfully become the bridge of friendship between these two main characters. Sometimes a mystery anime is not about having a plot twist or complicated murder case, but about characters discovering themselves and develop. While sometimes the rotoscope animation looks weird and not really blended with background, rotoscoping make movie feels natural and down to earth. Just like the classical strings-and-piano music score that accompany the journey of Hana and Alice, This movie presents viewers a beautifully crafted story of two teens facing their own problema and naturally build their friendship by the time goes on.