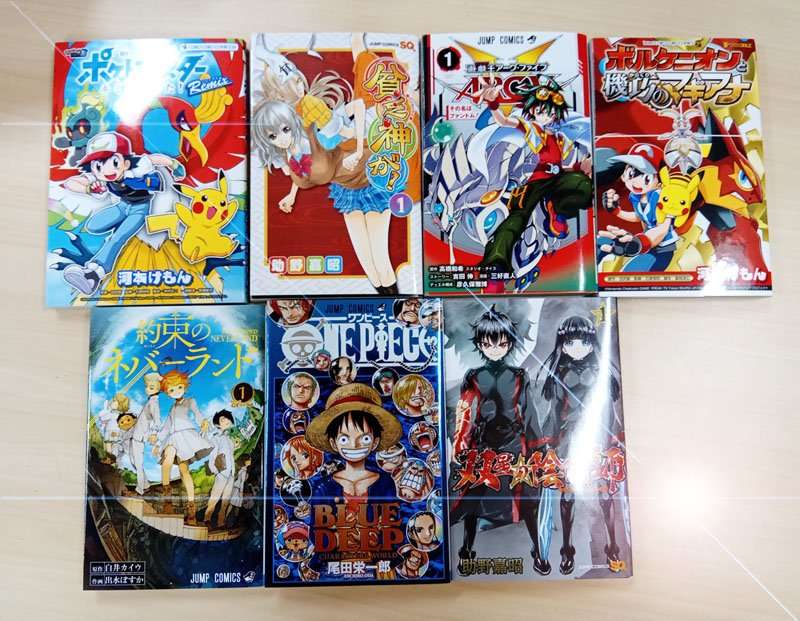 On Friday (30/3), the Twitter account of Indonesian comics publisher Elex Media Komputindo‘s editor has posted a teaser about the comics that will be released in 2019. While the post does not mention the titles, the picture included in the post shows the Japanese volumes of The Promised Neverland, Twin Star Exorcists, Good Luck Girl! (Binbougami Ga!), and Yu-Gi-Oh! Arc-V, all are titles from Japanese publisher Shueisha. Detailed information about the official titles that will be used by the Indonesian editions and the release dates have not been revealed yet, though the post mentions that the comics are planned to be released around the middle of 2019.

The Promised Neverland is written by Kaiu Shirai and drawn by Posuka Demizu. The series tells the story of three kids, Emma, Norman, and Ray, who are the brightest kids at the Grace Field House orphanage. The three of them and the other kids have enjoyed a comfortable life under the care of the woman they refer to as “Mom” with good food, clean clothes, and the perfect environment to learn. But one day, Emma and Norman uncovered the dark truth of the outside world they are forbidden from seeing.

The series has been serialized in Weekly Shonen Jump since August 1, 2016 and it has so far been compiled into 14 volumes. The Promised Neverland has also been adapted into an anime TV series which aired in winter 2019 season with 12 episodes have aired. The cast includes Sumire Morohoshi as Emma, Maaya Uchida as Norman, and Mariya Ise as Ray. The animation was produced at CloverWorks with Mamoru Kanbe (Princess Comet, Sound of the Sky) directing. The second season of the TV anime adaptation has also been planned to be aired in 2020.

Twin Star Exorcists is written and drawn by Yoshiaki Sukeno, and follows Rokuro, a boy from a family of excorcists who remove the evil kegare. One day he met another exorcist named Benio and they both learn that they are the destined “Twin Star Exorcists,” two ultimate fighters fated to marry and create the prophesied child who will eliminate all the kegare in the world.

In Japan, Twin Star Exorcists has been serialized in Shueisha’s Jump Square since November 2, 2013, and has been compiled into 18 volumes. It has also been adapted into anime TV series which aired from April 6, 2016 to March 29, 2017. The anime adaptation was directed by Tomohisa Taguchi while the animation is handled by Studio Pierrot.

Good Luck Girl! tells the girl name Sakura Ichiko (16 years old) who has been blessed with an inordinate amount of good fortune but at the cost of absorbing all the fortunes from her surroundings. To correct that massive imbalance, Momiji, God of Misfortune, has come to earth to remove Ichiko’s power and return all the fortunes she has taken to the right places.

Written and drawn by Yoshiaki Sukeno, the comic was serialized by Shueisha’s Jump Square and has been compiled into 16 Volumes. Good Luck Girl! has been adapted into an anime TV series which aired on July 4 until September 26, 2012. The anime was directed by Yoichi Fujita and the animation is handled by Sunrise.

Elex Media Komputindo is one of the most prominent comic books publisher in Indonesia. The company publishes licensed foreign comics and also comics from Indonesian authors.