A collaboration between developer Tokyu Land Indonesia x Studio Colorido, the animation tells the story of a young man named Harry, who works at Tokyu Land Indonesia, and a young girl named Elis who currently lives in Tokyo but really loves Indonesian culture. Both have the same dreams and hopes for Mega Kuningan area. This animated commercial was made in the form of a short anime with a duration of 11 minutes.

Here is the Anime Movie of BRANZ Mega Kuningan:

Tokyu Land Indonesia is a Japanese development company, which is also responsible for the development of this luxury Japanese-style apartment. Tokyu Land previously participated in building the Shibuya region into a prestigious area in Japan. Studio Colorido itself has made other anime such as Penguin Highway and Pokemon Twilight Wings as well as animated commercials for various companies such as McDonald’s and Otsuka Pharmaceuticals.

On the official site of BRANZ Mega Kuningan, Tokyu Land Indonesia feels happy to be involved in this apartment project and coney it through this animation while at the same time demonstrating the potential for the Mega Kuningan region in the future.

BRANZ Mega Kuningan is an apartment complex planned to be built on Kuningan, South Jakarta. It branded itself as modern, high quality and luxury condominium for enriching urban lives. The construction was first announced in December 2018. In February 2019, it was reported that 160 units of BRANZ Mega Kuningan have been sold. 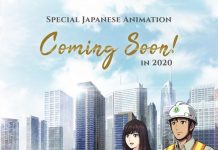