Indonesia’s annual Japanese culture festival, Ennichisai, had returned on May 14th and 15th, 2016. Located at Blok M Square, South Jakarta, the theme for this year’s Ennichisai is Miracle: Power of Love. The event also gathered numerous hosts and guest stars from both Indonesia and Japan.

One of the guests featured in the event is Yumi, a female singer hailing from Bandung. On Sunday, KAORI team managed to catch an interview with Yumi, who has just released her first mini album. Read on for her interview alongside Kohei Sako about her singing journey from Indonesia to Japan below.

Having went through recording sessions and live concerts in Japan, How did you started your career in singing?

I’ve been fond of singing for a long time. Ever since 2010, I’ve been actively singing on YouTube, covering songs from popular singers such as LiSA.

Are those videos still available today?

Unfortunately, the YouTube account has been banned because of copyright issues. At that time, the first person who noticed that my account has been banned was a friend of mine. I think it happened back on 2012, when one of my friends told me “why do your videos disappeared on YouTube?” I tried checking it out myself, and apparently all of my videos had been taken down.

Back then I’ve wanted to be the “Justin Bieber” of Indonesia, as in I wanted to start my own singing career from YouTube. Whenever I posted one of my videos, I hope that one day a producer will approach me and strike a deal to become a full-fledged singer. Unfortunately, no one ever contacted me from 2010 to around 2012-2013.

One time, there was a producer from South Korea who contacted me. I’ve also been invited to attend an audition there, but with the mass take down of my videos, there hasn’t been any follow-ups ever since.

What kind of auditions did you attend since then?

I’ve also been invited to JKT48’s audition during its early years. I also attended the audition, but unfortunately, I didn’t pass. From there, I’ve decided to gain more experience by participating in various contests.

What kind of contests did you participate in?

My first contest experience was a karaoke competition held by Japan Foundation. I won first place there. At first, I thought that “this could be the big break to go to Japan”, but it turned out I got some CDs of Japanese artists like LiSA, Aoi Eir, as well as AKB48.

Since then, I started to participate in more competitions, but somehow always ended up in second place. Even when I participated in Ennichisai’s singing competition back in 2013 and 2014, I finished in second.

Speaking of LiSA and Aoi Eir, are you fond of those two?

Yes, LiSA and Aoi Eir are my inspiration and influence in my music. I’ve always wanted to have an energetic look whenever I sing, just like both LiSA and Aoi Eir did. I went to LiSA’s solo concert in Jakarta back in 2014, it was so moving that I actually shed a tear or two while looking at her performance up front.

There’s been rumors that you’ve been hailed as Indonesian equivalent of LiSA. Is that true?

Well, I’ve been told by a couple of Japanese culture communities that I’m very similar to Lisa, from my vocal range to my stage act. I don’t really feel like I’m similar to her in some ways, though.

Let’s just say you’ve been given a chance to perform together with LiSA. How would you react?

I would probably freak out and fell unconscious along the way!

If I remember correctly, you’ve also performed in a band as well…?

Yes, back in 2013 I’ve joined in a band called Aozora Band from Bandung. I’ve participated in the audition and volunteered myself to become the vocalist for the band. I’ve also showed my videos to the band… I think I went a bit overboard back then.

Being in Aozora helped me to gain more experience on the stage, but I decided to leave the band to explore my talents further as a soloist.

And how did you end up having a recording session and a live show in Japan?

During Ennichisai in 2013, I met Hanada-san. That’s where I got the opportunity to perform in Japan. It’s like a dream come true!

The first time I went to Japan, I headed straight to Osaka to perform there, on a live house named SOMA. It was very amazing to see both the young and the elderly together on a music performance. It’s a completely different atmosphere compared to Indonesia, looking at elderly people still going to music events with high enthusiasm. It also motivates me in a way, showing that dreams don’t die easily, even when you’re getting old.

After my Osaka trip, I participated in another WKG contest in Ennichisai, and finished in second place as always. That’s when Hanada-san offers an opportunity for me to make a single.

How did it went?

My first single went through a crowdfunding process held exclusively on Japan only, so I need a number of supporters to make it happen. I also messaged a few of my Japanese friends on Facebook. The process reached its goal, and my first single, “Stairway to Dream” is released on November 2014.

Is there any kind of story behind your songs?

“Dream” has been an ongoing theme for most of my songs. For example, “Higher” is about reaching your dreams that keeps going higher and higher. There’s also “Take a Chance” which contains the meaning “if you want to change, then you have to take every opportunity, take a chance to make it change“. “Sora Iro Canvas” is also about the ups and downs of a journey to reach your dreams.

Continued to next page.

CGV and Cinemaxx to Screen “Love, Chunibyo, and Other Delutions the... 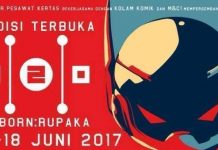 H2O:Reborn Series to be Adapted as a Stage Play