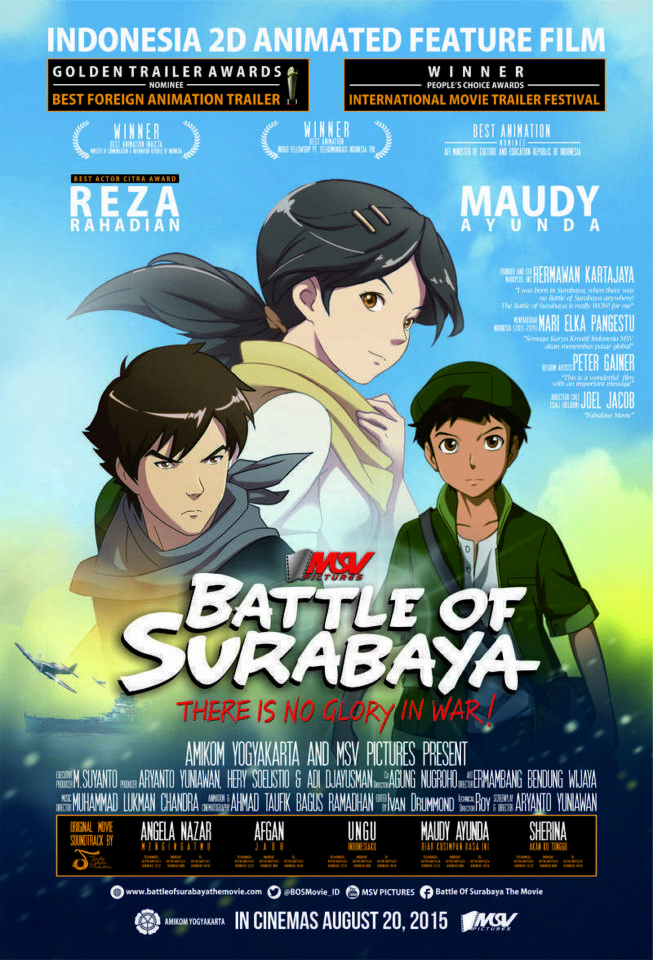 After waiting for three years and through rumors that it couldn’t be finished, the 2D animated film Battle of Surabaya, made by MSV Pictures finally arrived in the cinemas. Many people have had their doubts toward the film, especially the Japanese anime lovers who underestimated it. But finally, the film is poised to answer those doubts.

The story of Battle of Surabaya takes place after the bombing of Hiroshima and Nagasaki by the United States in the Second World War, and Japan finally surrendered to the Allied forces. Following the surrender, Indonesia, which had been an occupied region by Japan at the time, proclaimed its independence. But the struggle had just entered a new phase. Tensions arose with the occurrence of the Hotel Yamato Flag Incident (Insiden Bendera di Hotel Yamato) and the desire of the Dutch forces to reclaim their East Indies that came along with the arrival of the Allied forces. On the other side, there were some troubles made by a youth group named Kipas Hitam (The Black Fan), a semi-military organization made by Japanese army.

The story follows a shoe shiner boy named Musa who later became a courier, delivering secret messages for  Indonesian militia and deliver private messages from those fighters to their families. In his mission, he was helped by his comrades Yumna and Danu. Musa went through many incidents, from witnessing the the battles with his own eyes, hearing stories from the combatants, to being chased by the Allied soldiers.

In regards to the animation, the movie made by MSV Pictures and STMIK AMIKOM Yogyakarta is still lacking in many places, from the rough looking in-between animation, choppy cuts between scenes, and noticeable difference between the 2D animation and the 3DCG elements. As for the story, the first part feels rough and a little confusing. Also, the depiction of action scenes are still inflexible and seems stiff. Fortunately, these are covered by the expressive depictions of the characters emotions and also the beautiful and tidy backgrounds.

Battle of Surabaya is quite clever in picking the setting for the story. The story actually takes place before the eponymous battle. So the film is not really plagued by cliched depiction of war. The story in this film is not always about war, and it also shows another side of war which is heartbreaking in taking the points of view of the victims and the participants, which brings a humane touch to this film. The tagline “There is no glory in war” certainly becomes the core of the story and can be executed well. This movie also evoke similar feel to the Ghibli studio work titled Grave of the Fireflies where the main characters in the are also the victims of war. The film also did not preach nationalism excessively like what other similar films would have done, so that this film can go well for international audiences. Some scenes in this movie even take some stereotypes that are akin to Hollywood movies.

The plot in Battle of Surabaya is filled with fitting developments for every character without rushing them. There are some mellow parts in the film but these doesn’t seem to be too melancholic and is still in the proper scale for a war drama. The film has many dialogues filled with twists, and also some funny scenes because of the use of local dialects and comical situations that make the story of Battle of Surabaya can make up for the lack in the animation.

All voice actors in Battle of Surabaya also performed well, especially the two main stars of this movie, Reza Rahardian as Danu and Maudy Ayunda as Yumna. Unfortunately, Maudy is a little flat in voicing Yumna while in the action parts, although she sounds cute otherwise. On the other side, Reza voiced Danu really well. Danu’s personality is depicted well by Reza Rahardian. Reza voiced this character smoothly in every scene, from the casual scenes to the action scenes. Ian Saybani, who is voicing the innocent but brave Musa, also performed the character really well. The chemistry between the voice actors also went smoothly. 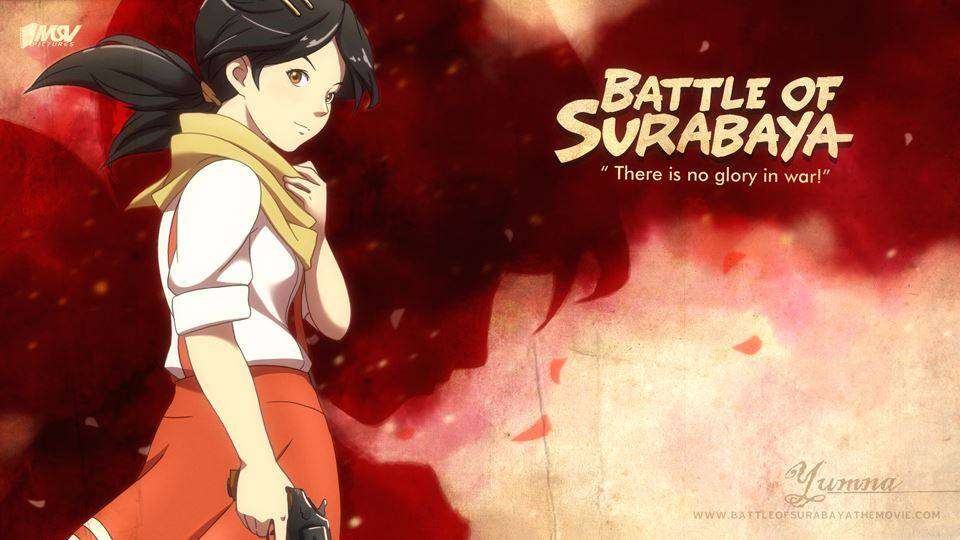 As a pioneer for local 2D animated film for theater, Battle of Surabaya has done its job very well. Battle of Surabaya has a story which exceeds the standard for animated film made by Indonesian. The story is fitting to play with the war drama genre, but does not trapped in the drama too deeply. Regarding the animation, though there are still a lot that needs to be improved.

There is no glory in war, but this movie has many glorious moments inside it. Battle of Surabaya proves that Indonesian filmmakers can make an animated film with a good story and good enough animation for a pioneering work.