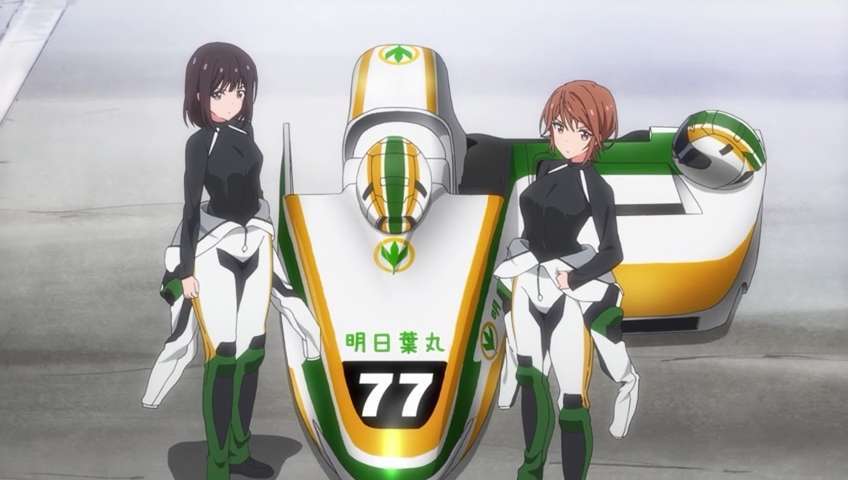 Welcome to Miyakejima, an island under Tokyo’s administration that is a “paradise” for racers because the island does not have a maximum speed limit for driving on the road. Each year, the island hosts Miyakejima Tourist Trophy (Miyakejima TT) an annual racing event that competes various sidecar motor riders all over Japan. This anime tells the story of Yuri Miyata and Megumi Meguro, two students from Miyake Girls’s High School who just entered their first sidecar race.

If you are a motor racing fan, you will immediately realize that Two Car is clearly inspired from the UK’s legendary motor racing event, Isle of Man TT; from the story that takes place on a remote island that also becomes a street circuit, and the annual motor racing event hold on this island (Isle of Man TT race itself is also referenced by one of its characters in this episode).

So what about the first episode of this anime? Unlike in other sports anime that portrays the main characters as those who were just getting to know the sport, the first episode of Two Car directly invites the audience to watch Yuri and Megumi who are ready for their first race. Flashback to the moment when they were first introduced to the sidecar racing world is shown between the race with the right proportions. The racing scene is so exciting that it feels as if you are watching a real motor race on TV, complete with realistic bike engine sounds (that feel more optimal when listened through earphones / headphones).

On the other hand, the sidecar racing concept that requires the riders to pair up is also well used by this anime to present unique duo characters (such as the gothic loli and S&M-themed duet) with a bit of trivia to some racing circuits in Japan.

Despite the anime featuring one of the “niche” motorcycle racing discipline, especially in Indonesia, Two Car seems to be an anime series that can fill that “void” of racing anime which has been rarely explored. Watching this anime will make you realize the thrill of sidecar motor racing and of course, the Isle of Man TT.