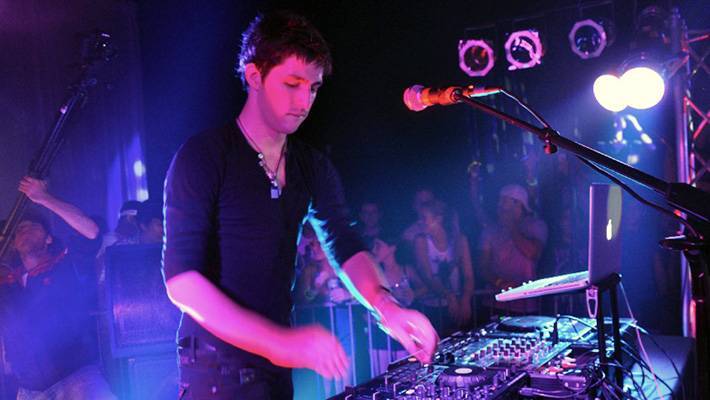 The thought of combining electronic music with anime is unthought of by general Indonesian anime fans. electronic music is highly associated with nightclubs, booze, alcohol, and other aspects of nightlife that Indonesian anime fans aren’t much familiar with. Also, anime more often uses J-Pop songs or songs originally made for that certain anime series, which later known as anisong. Even so, there are actually some series that utilize electronic music in their soundtracks. Some notable examples are Samurai Champloo and Panty & Stocking with Garterbelt.

Samurai Champloo is an anime about the journey of 2 vanguard samurai and a girl, produced by Manglobe back in 2004. The show is most notable for its different take in samurai theme, incorporating hip-hop elements, which is supported further by the music, giving the show an even more different twist. Even though there are popular names in the staff list such as Shinichiro Watanabe, Mamoru Hosoda, Dai Sato, and Hiroyuki Imaishi, the man responsible for making Samurai Champloo memorable is none other than Nujabes.

Nujabes (anagram of Seba Jun, Nujabes’ real name) is a DJ who is famous for his music which incorporates jazz and hip-hop elements. He composed the music for the entire series, alongside with Fat Jon and Force of Nature. He also collaborated with rapper Shing02 for the opening song, “Battlecry”, and MINMI for the ending song, “Shiki no Uta”. The combination of Nujabes’ music and the overall theme of Samurai Champloo helped to made the show a hit.

Years later, Panty & Stocking with Garterbelt (known as PanSto for short) made its appearance in 2010. Contrary to what most anime looked like at that time, the Gainax-produced show was made to be as “different” as possible; Western-styled visuals that resembles Powerpuff Girls, sex jokes, rough language, and more sex jokes. Other than those, PanSto also had a huge share of electronic music, thanks to Taku Takahashi and the guys at TCY CREW: Hoshina Anniversary, Booty Bronx, and TeddyLoid.

Even though all three of them are talented in their own respective way, TeddyLoid stole the spotlight with arguably the catchiest music in the entire PanSto series: “Fly Away”. His name rose even more after his collaboration with daoko in Me! Me! Me!.

With the combination of EDM and PanSto‘s overall theme, there’s no doubt this anime could be easily mistaken as “western-made”. In fact, PanSto itself has been a “love-it-or-hate-it” anime; there are people who praise it as an anime who “dares to be different”, and there are people who hated it because of its “ugly western graphics”.

Porter Robinson is an American DJ and producer, famous for his recent album, Worlds. His diverse style in music has led him to perform in many events, from major electronic music festivals such as Ultra Music Festival and Electric Daisy Carnival, to anime conventions such as Anime Expo, where he performed live together with Anamanaguchi. He has also recently performed in Djakarta Warehouse Project 2015 last week, on the 12th of December, 2015. After the release of his first album, Spitfire, he decided to change his approach on his music, gradually making tracks that are completely different from his previous works. Using his fondness of Japanese culture (especially anime), Porter tried to insert those elements into his tunes, giving a fresh take on electronic music, and gave birth to “Flicker” and “Sad Machine”. In “Flicker”, Porter used Remon Yamane’s laugh from Ano Natsu de Matteru (Waiting in the Summer) as a sample. While in “Sad Machine”, he used a Vocaloid program to make the vocals. Porter is also famous for including anisongs in his mix while he was performing live.

There’s no mistaking that electronic music is on its peak today. Even though there are anisong that uses EDM as their base (e.g. Kanade Hayami’s Hotel Moonside in iDOLM@STER Cinderella Master), most anime are still using instrumental background music and J-Pop/anisong for their opening/ending songs. Samurai Champloo and PanSto are a couple of examples that incorporate electronic music in anime and gave the show some kind of “trademark”, while Porter Robinson shows that electronic music with a little touch of anime elements is still enjoyable and accessible for people, both partygoers and anime fans alike.

While most anime fans in Indonesia still consider electronic music and anime as “two things that don’t mix together”, some people have already begun to break that misconception, notably REDSHiFT and their Vocaloid/anisong remixes, which garnered many attention and received many praises from their fans. With the amount of anisong EDM remixes out there, it is safe to say that electronic music and anime are like two sides of the same coin.