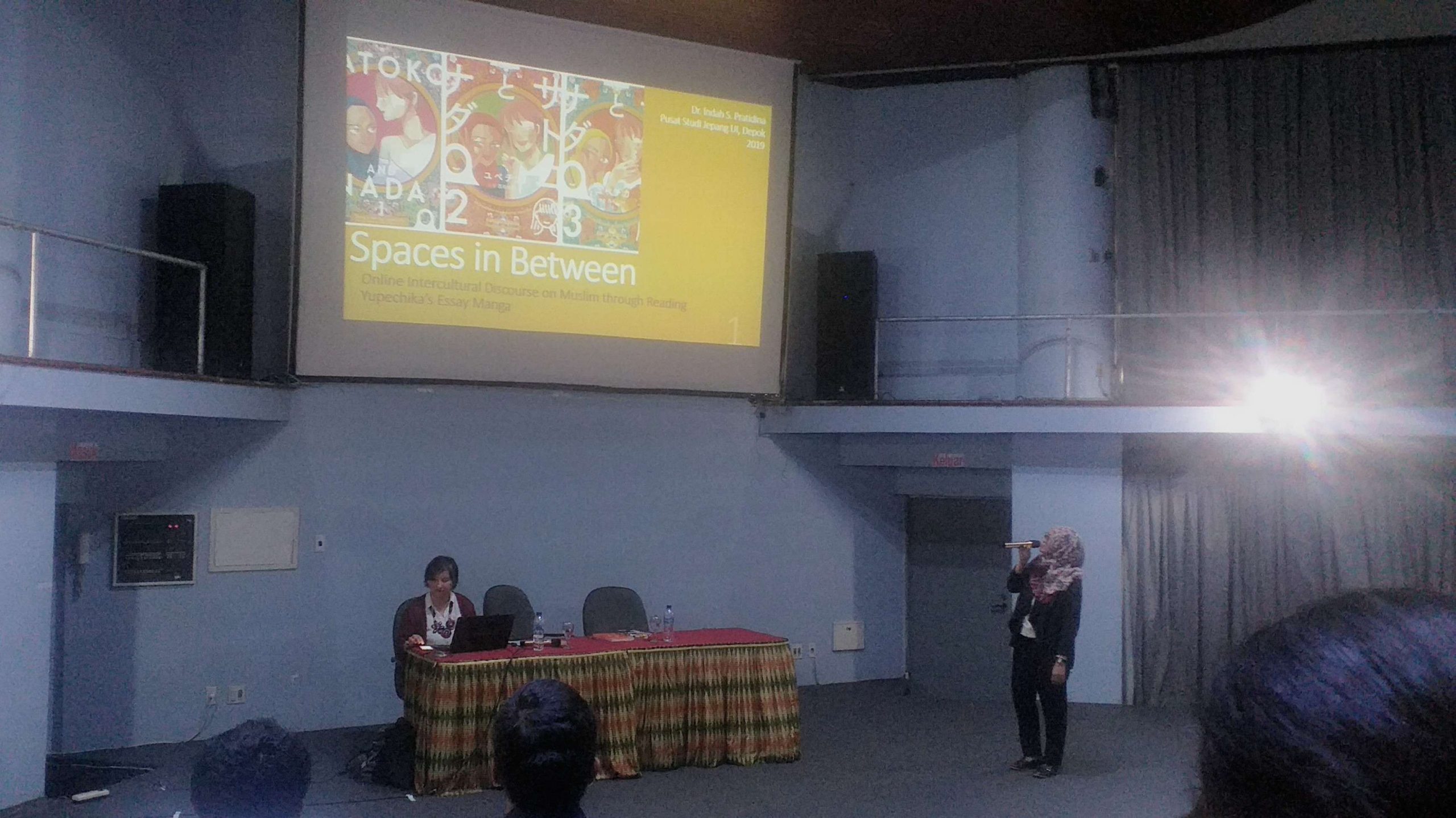 Though often considered cheap entertainment, popular culture has interesting characteristics to be studied from various perspectives, including, for example from the angle of intercultural communication. This is an angle taken in a public lecture entitled Spaces in Between: Online Intercultural Discourse on Muslims through Reading of Yupechika’s Essay Manga held at the Auditorium of the Japanese Studies Centre at Universitas Indonesia, Depok, on September 25, 2019. This public lecture was the first in The 8th Japanese Studies Public Lecture Series held by the Japanese Studies of Universitas Indonesia in collaboration with the Japanese Embassy between September and December 2019. The lecture featured research on manga Satoko and Nada (Satoko to Nada) conducted by Dr. Indah Pratidina from the Communications Department of the Faculty of Social and Political Sciences, Unoversitas Indonesia, who was also an editor of fictions at the publisher PT Gramedia Pustaka Utama and has experience in translating Yoshichi Shimada’s Saga no Gabai Bachan and Marjane Satrapi’s Persepolis into Indonesian.

Satoko and Nada is a series of 4 panel manga (4-koma) by Yupechika that tells the story of Satoko, a Japanese student in the US who shares a room with a student from Saudi Arabia named Nada. The manga was originally published on Twitter by Twi4 since January 2017 before the print edition was first published in July 2017. Dr. Indah also considers the manga to be an essay manga, although unlike the usual essay manga, the content is not based on the author’s own experience, but rather inspired by the experience of multiple Japanese people with Middle Eastern muslims. Cultural differences between the two main characters is the main theme in the comic, and Dr. Indah’s research enquires into the depiction of these differences in the manga and also to the responses from the readers. He has also conducted interview with the manga’s editor, Yumiko Hayashi, but has not been able to interviews the author yet.

As mentioned in the title of the lecture, “space” is one of the key concepts and here means a place where interaction and communication take place, so it does not always refer to a physical place, but can also be in the form of media. As quoted from Judith and Nakayama (2017) in Dr. Indah’s presentation, popular media can introduce different cultures without requiring physical movements of the people involved. Regarding Satoko and Nada, the space for interaction and communication between cultures includes the manga itself but also the Internet platforms where the manga is released and where the readers respond to the manga.

Next, it is explained that intercultural communication is a process that involves people who produces meaning through different cultural backgrounds as references. Cultural differences can be in the forms observable on the surface such as in dress or food, as well as differences in deeper elements regarding fundamental life values. The differences at these two levels are shown in Satoko and Nada as a source of difficulty in communications between the two. However, theses differences are approached with the willingness to exchange information in order to adjust to them, although they do not immediately reach mutual understanding, such as when Satoko thought she also had to put on head cover when she saw Nada was praying. And the process is also not just one directional, such as when Nada and her friends discussed with Satoko about the religion of Japanese people. Overall, these heavy topics are conveyed in the manga through light conversations in descriptions of daily experiences, not through lengthy explanations, although there are indeed a number of explanatory notes on certain concepts such as Ramadan.

The space of intercultural communication does not take place only in the panels of the manga, but can also be found on online platforms in the readers’ responses to the manga, especially from Japanese readers. Dr. Indah collected responses from Twitter as the platform where the manga itself is initially shown and also from reviews on Amazon.co.jp. The observation identify three main forms of responses; positive responses, treatment as popular culture, and negative responses. The positive responses expresses appreciation for the knowledge that the readers can learn about Islam from the manga, and desires to understand more and reflect on cultural differences. While treatment as popular culture refers to responses that are more like mimicking the surface aspects of culture seen in the manga like a fashion, for example trying to wear clothes like what Nada wears or trying Arabic coffee.

Even if a few, there are also a number of negative responses. For example, some consider this manga to be biased towards the friendlier side of Islam, while in reality there are still muslims who commit terrorism. Even though there is truth to that line of thought, of course that can also apply to any religious group, nation, or other social groups. There are also those who hold conspirational suspicion that the manga is a medium to spread Islam.

After the presentation from Dr. Indah was finished, a discussion session with the lecture participants began, and the questions raised tend to be more directed towards how Japanese people view Muslims and how Muslims are treated in Japan. That seems to be because aspects of Nada’s life as a muslim, such as Ramadan fasting, are already relatively more familiar to Indonesian audience, even though as Arab characters there are of course, parts of Nada’s culture that are different from Indonesians, and many muslims in Indonesia do not necessarily understand well the difference between jilbab, hijab, niqab, and others, anyway. But on to the questions themselves, Dr. Indah was able to share her own personal experiences of studying in Japan. She felt that there are differences in the attitude of the Japanese towards Islam before and after September 11, from her wearing headscarf is just seen as something strange to more people getting curious to know what Islam is.

It was further discussed that this attitude is also influenced by the Cool Japan agenda and developments in the halal business trend. The potential of tourist visits from countries that have large muslim population makes the needs of muslim tourists given more attention to attract their visits, especially with the Tokyo Olympics coming in 2020. But even though facilities for tourists are becoming more comfortable, the same cannot necessarily be said for muslims living in Japan to study and work. Japanese companies’ policies towards the needs of muslim employees to carry out the prayer or fasting can vary from company to company. As Dr. Indah and the moderator said, this can be a topic for further research.

Overall, this public lecture has produced a good academic discussion. Through questions driven by curiosity, and responses that shown a researchers’ moderation, the exchange of ideas that occured can point to potential issues that can be taken up for further researches.

The Indonesian Anime Times | Report and photo by Halimun Muhammad