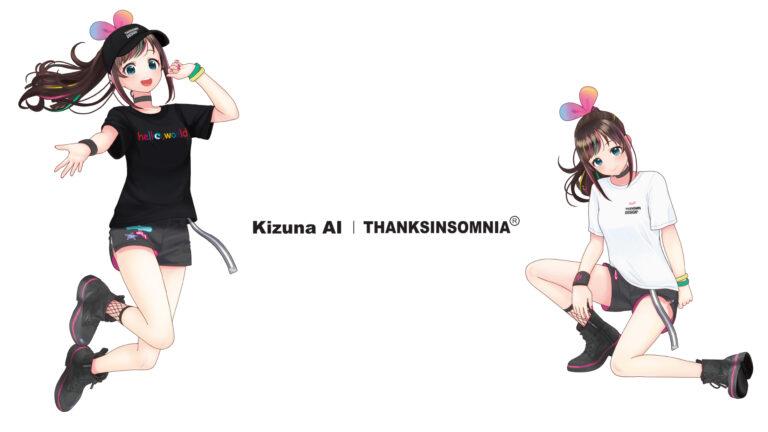 Indonesian streetwear brand Thanksinsomnia has announced a collaboration with Japanese virtual YouTuber Kizuna AI. On social media, Thanksinsomnia announced that the brand will produces t-shirts and caps with a special design to celebrate Kizuna AI’s second livestream concert Hello, World 2020, which will be held on 28 December 2020. The product will be released on 21 December 2020 and available at Japanese online store Sixty Percent.

Founded in 2013, Thanksinsomnia is an Indonesian streetwear label that produces many types of product, ranging from bags, clothes, accessories, to footwears. They are famous for their simple but iconic design that usually incorporates their peculiar “Thanksinsomnia” logo on their product.

Debuted in November 2016, Kizuna AI is a virtual YouTuber famous for her vlog-style YouTube content, which features many topics like gaming, anime or just everyday topics about living in Japan. She also has her own gaming channel, A.I Games, where she plays some popular games like Fortnite. Her main channel, A.I Channel, already has more than 2 million subscribers. Previously, Kizuna AI also guest starred in C3AFA 2018 Jakarta event.

Other than in YouTube, Kizuna Ai is also famous for her appearances in other media. She has her own TV show named Kizuna Ai no BEAT Scramble which has aired since April 2018. She also has released her own single. Her first single released on 15 July 2018, titled Hello, Morning. Since then, she has released many other songs, including her latest single Touch Me, and a song titled Ai no Hana which produced in collaboration with another virtual YouTuber KAF.