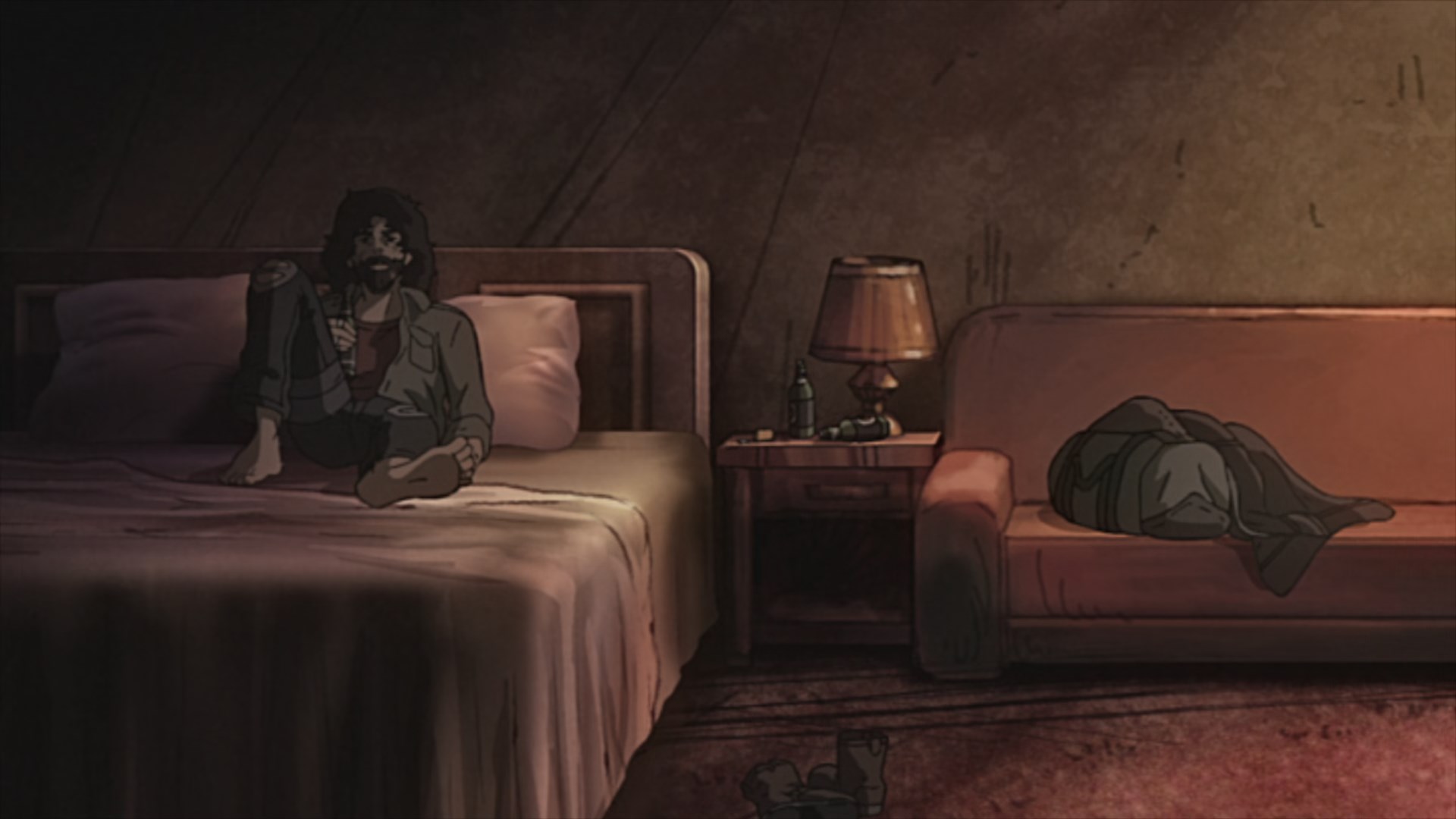 Seven years after making his meteoric rise to fame and making history by winning the first-ever Megalonia championship, Megalo Boxer “Gearless” Joe finds himself alone and on the road again. Now a man haunted and a soul tortured, he makes his way from ring to small ring, fighting under the name of “Nomad.” On the run from his past and barely alive in the present, will there still be a tomorrow for this Joe?

Oh Joe. What happened to you? The last time we saw our hero at the end of the first Megalobox, he had won it all, proven himself, and held his head up high. Now we find him alone and without a home, punch-drunk, seeing people that aren’t there, and scraping painkillers off the bathroom floor. Subtle clues hint at a traumatic event that occurred sometime between the first series’ ending and this one for Joe to turn out this way. Joe guilt trip hallucinating his coach Nambu is certainly a worrying sign that something went horribly wrong for him and his friends.

But despite the downer of a story it’s depicting, the show’s visual flair still manages to be an absolute knockout. Keeping its low-definition style, the blurry, grainy look of the show lends itself well to the urban wasteland Joe travels through. Far removed from the metropolis the first show is set in, Nomad wanders from one decrepit small town to another. And there’s a certain beauty to how it depicts its dusty underground boxing rings, its empty and run-down motels. Not only is this true for the visuals, but also for it’s stellar soundtrack which is heavily influenced by Spanish music. Perhaps just how different Nomad is to its prequel is best illustrated by its ending theme: while the latter had the upbeat, defiant “Kakatte koi yo” by Emi Nakamura about bringing it on, Nomad has the somber “El Canto del Colibri” by mabanua about a lost soul longing for redemption.

So this time, it’s Rocky Balboa instead of Rocky. You have to give them props for willing to put their protagonist through the wringer like this. It breaks your heart seeing your hero broken and battered, but it’s certainly a bold direction for the sequel to take. Though, the original Megalobox itself was a celebration of 50 years of the Ashita no Joe manga, and fighting against the odds to rise up and become a hero to the downtrodden has always been what Ashita no Joe is about. Perhaps here the old adage still rings true: once you hit rock bottom, there’s no other way except to go back up again. And you go back up fighting.