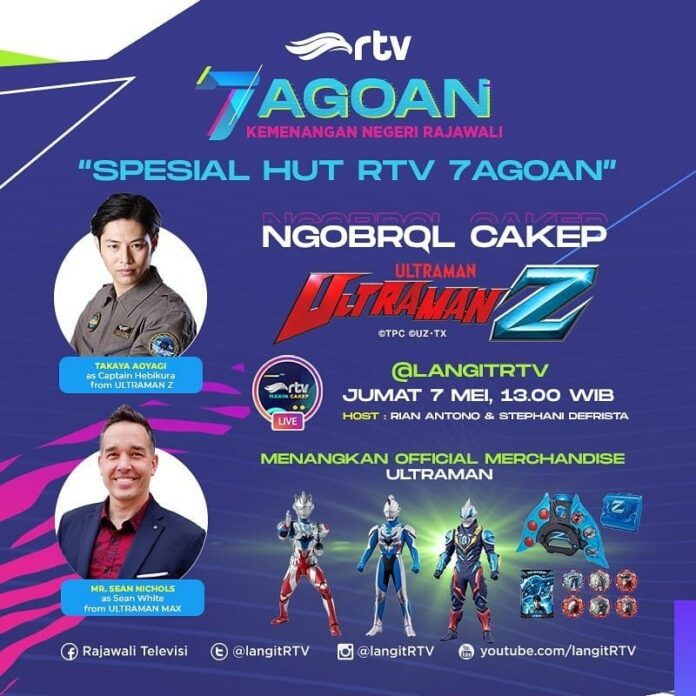 Indonesian TV Station Rajawali Televisi (RTV) is going to celebrate its seventh anniversary by streaming an online talk with Takaya Aoyagi, the cast of Captain Shouta Hebikura in Ultraman Z, and Sean Nichols, the cast of Sean White in Ultraman Max. The talk will be streamed on RTV’s Instagram account on Friday, 7 May 2021 at 1300 West Indonesia Time (UTC+7). The event will also include a quiz with official Ultraman Z merchandise as prizes. In addition, RTV has confirmed that Ultraman Z will be aired on the channel “soon.”

Ultraman Z is the 30th Ultraman TV series, airing for 25 episodes from 20 June 2020 to 26 December 2020. The title character is a self-proclaimed disciple of Ultraman Zero. While looking for scattered Ultra Medals on Earth, Z bonds with Haruki Natsukawa, a rookie pilot for anti-monster robot force STORAGE, to help protect Earth from giant monsters. Hebikura is first introduced in the show as the captain of STORAGE and a mentor to Haruki, though he hides a secret regarding his real identity.

Ultraman Max is the 19th Ultraman TV series and the sixth to air in the Heisei period. The show stars Souta Aoyama as Touma Kaito, a young man who often rescues people from natural disasters and seeks to join DASH. Though he failed his entrance test because his actions were deemed endangering his own safety, he recklessly replaces a wounded DASH member to fight a giant monster. Touma nearly gets killed in the battle, but he was saved by the being called Ultraman Max who bonds with him, and they begin to defend the Earth from monsters together. In the show, Sean White is a member of DASH as an engineer for the team.