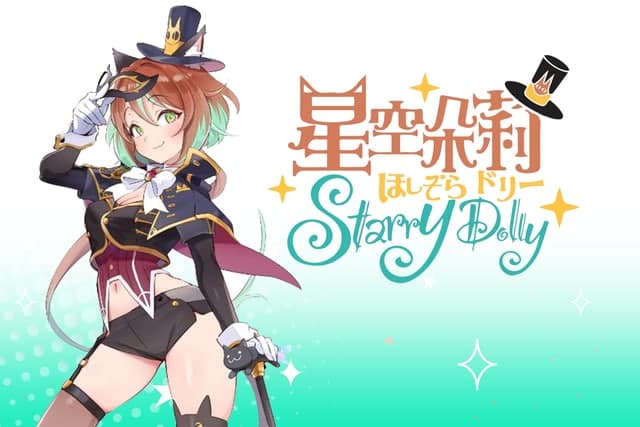 In early May, Pymiiya Virtual Idol Production Team conducted an audition project called Mobs in VT – You Decide!. Later in mid-June, they reviewed more than 100 entries from all over Taiwan. Based on the submissions of recorded works, self-introduction, performance talent, extra points, language mastery, etc., the final selection was made by the producers of performing arts agency and the team’s vote.

From the final audition result, a distinctive talent has been selected. The character of Starry Dolly (Hoshizora Dolly) is ready to make her debut. She has already left a preview of her virtual thievery debut, which will be broadcasted live on July 10, 2021.

Starry Dolly was originally a domestic cat, but after a “change of heart”, she started to play the role of a strange thief of the night in a gentleman’s costume with her signature of leaving a warning letter preceding each of her crime-like pranks. What are the tricks that she’s going to show you next?

Starry Dolly is also the first VTuber daughter of a well-known Taiwanese illustrator Xia Ate (@toku0408). Currently based in Japan, Xia Ate is widely known for his original manga Shirou Kensei (Transmoe Sword Fantasy), in addition to drawing homages to video games like Pokémon and Splatoon. Upon this debut, Xia Ate commented, “Don’t ask me to draw characters over 12 years old ever again!” followed by Pymiiya’s producer’s response: “But our cat daughter is only 2 and a half years old!”.

Pymiiya Virtual Idol Production Team is a group of professional and like-minded talents from various fields. The person in charge of the team used “signing a cashier’s check” as the brand banner in a self-deprecatng manner, hoping to create charming and playful virtual characters to fulfill your entertainment needs and at the same time, to provide the best resources to the talents in the team at any cost. After the strenuous regimens of virtual training, we hope that Starry Dolly will become more sophisticated and is able to show her irreplaceable charm to steal the eyes of more admirers.