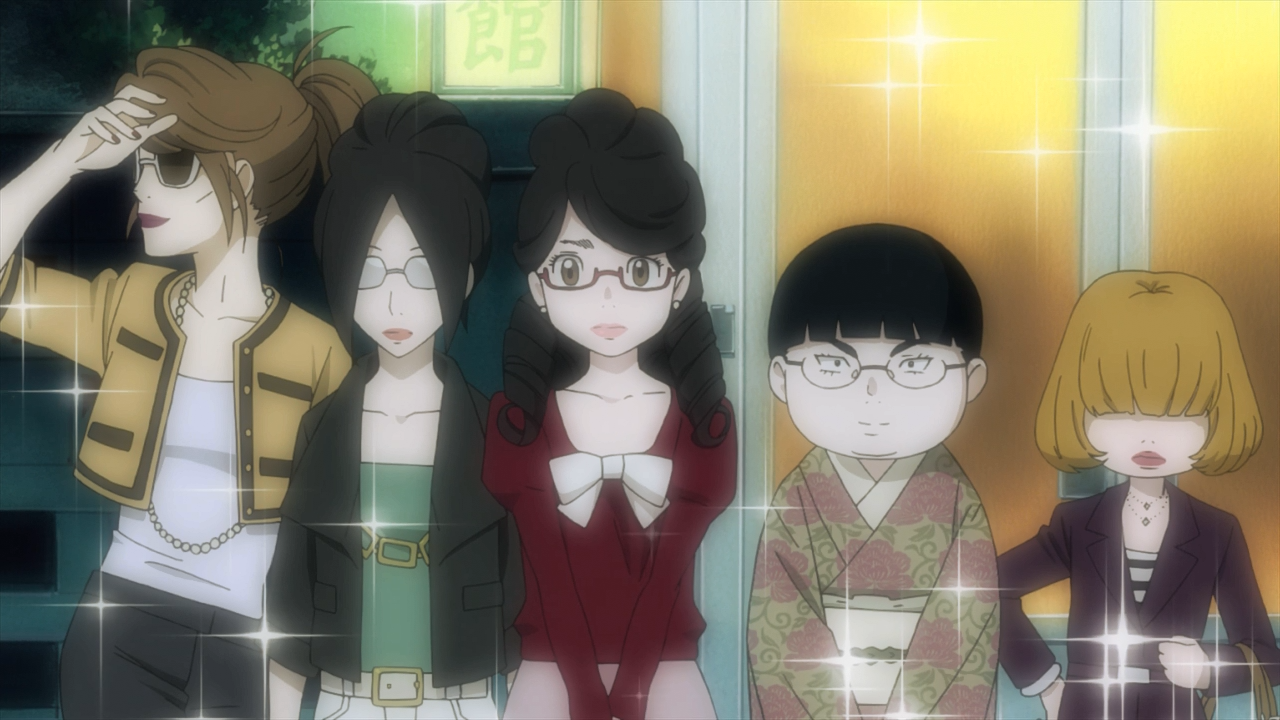 People are born different, and that is what makes us beautiful in its own way.

Kuragehime is an anime adaptation from a josei manga with the same name by Akiko Higashimura. It tells the story of Tsukimi Kurashita, an illustrator living in Tokyo with Mayaya, Chieko, Banba, and Jiji, her 4 fujoshi friends in an all-girls apartment called “Amamizu-kan”. Tsukimi lived a normal life with her friends until one night she met Kuranosuke, a fashionista which later turns out to be a cross-dressing boy. Since then, Tsukimi’s daily life takes a different turn, along with her friends. At the first glance, Kuragehime may seem to rely on fashion theme. But its true strength is in the concept of “beauty”. This is mostly shown during Tsukimi’s monologue, where she talks about being a beautiful girl while contemplating her self confidence to become pretty like a “princess”. Tsukimi isn’t the only one with this introverted personality, as the other Amamizu-kan residents also shares the same trait, until Kuranosuke came and introduced Amamizu-kan the world of glitz and glamour. Albeit being considered a hindrance at first because of the huge difference between the introverted residents of Amamizu-kan and Kuranosuke’s extroversion. Another strength of Kuragehime lies in its comedy. Tsukimi’s introverted personality, as well as her low self-confidence creates an interesting chemistry between the popular, out-going, and fun-loving Kuranosuke, making their interactions mostly funny yet serious at the same time. The combination of the characters’ overreaction with Brains Base’s fluid animation makes the comedy aspect of Kuragehime turned up by a notch, giving viewers a good laugh. Despite the comedy, Kuragehime missed the opportunity to explore the story further by missing out one aspect of the show, which is romance. Kuragehime showed us hints of romance between Tsukimi and Kuranosuke in some episodes. But later, during the end of the series, it seems to be gone without a trace. There are also some key points that may be crucial to the overall storyline, but somehow disappeared along the way, which resulted in viewers wondering what happened to those missing aspects of the show. Story aside, Kuragehime manages to make the show interesting by paying homage to western movies throughout the series. This is shown through the opening sequence, which parodies various scenes from movies such as Star Wars, Mary Poppins, and Sex and the City, as well as through episode names that are straight-up parodies of movie titles (e.g. Night of the Living Sisterhood, which is taken from the movie Night of the Living Dead) Overall, Kuragehime is a fun show which combines plenty of quirky characters with solid animation and good comedy, despite its minor lack on story exploration.