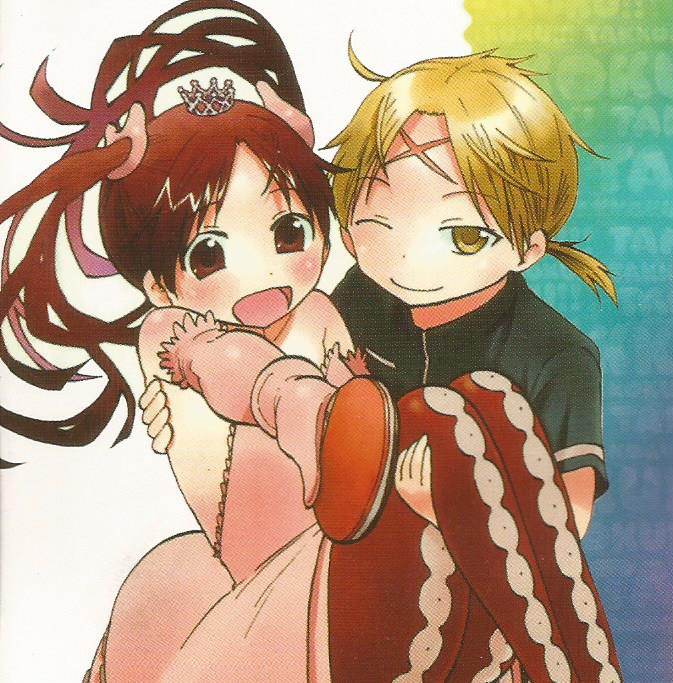 Does the power of love exist?

Takkoku!!!, a table tennis manga from Tsubasa Fukuchi (known for his previous work, The Law of Ueki, which has been adapted into a 52-episode anime series) brings that question to a whole new meaning (and stupidity). Takkoku!!! is 6 volumes long, and all of them has been published in Indonesia by Elex Media Komputindo. It has also been serialised in Shonen Star, a domestic version of Shonen Sunday, which was also  published by Elex Media.

First off all, what is the meaning of Takkoku? Takkoku itself is an abbreviation of Takkyuu Kokuhaku Hou, which means “table tennis confession law”. In Takkoku!!!‘s, version of Japan, a law has been enacted which dictates that any teenager who wished to confess love must win a table tennis game against the person he/she confessed to. If two teens touched each other without having the game won, a robot dog will appear to deliver punishment

After living abroad for 10 years, Gaku, our protagonist, has to learn table tennis for the sake of his promise towards his childhood crush, Kako, who has become Japan’s strongest Takkoku player in her wait for Gaku. Fukuchi came up with the idea of combining rom-com and sports when he was in the taking a bath (he confessed to it in the first volume’s extra chapter), and imbue it with his trademark fast-paced boke-tsukkomi gag.

Anyone expecting serious and realistic table tennis matches in Takkoku!!! would be disappointed, because the manga is is filled with super powerful techniques that ranges from paddle-melting flaming ball, static electricity, to balls that moves independently. Even more ridiculous, most of the special techniques has some elaborate explanation to justify them, which is another trademark of Fukuchi aside of his (mostly ridiculous) battle strategies in every manga that he wrote.

Another interesting factor (which also adds the comedic value) from Takkoku!!! is how Gaku and Kako manages to break the law that is supposed to restrict them. For example, Kako tries to make everyone jealous with her public display of affection towards Gaku in any way possible, without having to touch him (even though they got punished sometimes).

Apart from their jealousy-inducing riajuu affections, Kako’s character is portrayed nicely. Even though she’s mostly shown as a “happy-go-lucky” and an easy going girl, some scenes also shows her being sad because of not being able to hold hands with her crush

There is also a moral story in this manga. Gaku is very considerate towards Kako, to the point where he can read every single one of Kako’s movements during their match (“Love is the highest form of meditation, because you are focusing only on “her”” – anonymous). Not only that, Kako and Gaku’s efforts of being together also taught something else; even though they are separated by a pointless rule, that doesn’t mean their love will fade away. Rather, you could say that their love is getting stronger!

Speaking of characters, all of the cast in Takkoku!!! have striking characteristics. For example, our main character, Gaku, has many experiences from his travels overseas that happens to be useful to him in his matches. There’s also Muko, Kako’s friend, who acts as a tsukkomi for Gako and Kaku’s silly acts. To explain further the assortments of supporting characters, let’s take a look back at the plot.

The first half of this series depicts Gaku and Kako’s school life. There are harem elements in the story due to Gaku’s kindness that makes other girls go crazy– leading to them to challenge him for Takkoku match, so that if they won, Gaku will have to become their lover, instead of his crush, Kako. Every girl who has a crush on Gaku, from the Osakan girl, Hikari, to the miko Momoko, have different skills and unique personalities, but at the end of the day, most of them lost to Gaku’s power of love. The same goes to Kako as well.

And that is what makes Takkoku!!! different from any other sports manga. Unfortunately, there is a weaknesses, in the narrative when it undergoes a shift in setting and genre in the middle of the story. Even though the saving-the-world-through-table-tennis plot traces back to the origins of Takkoku law, this change of theme is confusing, not to mention the fast-pace of the change, added with new characters that hasn’t been given much exploration.

Let’s take a look at Misaki, one of the main heroines introduced in the middle of the story. She doesn’t have any character development and despite her important role, she doesn’t appear too often in the story, and this doesn’t happen only to Misaki. There are many characters that doesn’t get any development ever since the end of first half. After being defeated by Gaku, most of the girls end up as a bonus character in 4-koma strips.

Unfortunately, a good series doesn’t mean it doesn’t have any weaknesses. As has been stated by Aya, some characters like Jonta and Teto, lacks any development despite their different style in playing table tennis, which could be interesting if explored deeper.

Despite its weaknesses, Takkoku!!! is a must read. The balanced combination of humor and romance, added with battle scenes full of youth and vigor makes this manga a fun ride that can be enjoyed by everyone.

KAORI Newsline | Original text by Fathia ‘Aya’ and Hartono, currently on a relationship (even though they haven’t reached Kako and Gaku’s level)