Creative industry has become one of most the most notable economic sectors these days, mostly for its significant growth. This can be inferred from people’s enthusiasm for pop-culture conventions. Fans that are fond to their beloved anime, comics, and even artists, are willing to buy products related to their interests, such as merchandise. While we can see Japanese vibrant enthusiasm for Japanese pop-culture at AFA, and western pop-culture hype being represented at events bearing Comic Con, Indonesia seems to have little role on this promising industry. The trend has begun to change, though, and re:ON is one of the pioneer that saw the opportunity from this interest in popular culture and attempted to create their own place int the market.

re:ON Comics is a monthly comic magazine with print and web versions, managed by PT. Wahana Inspirasi Nusantara. The magazine debuted in 2013. By gathering talented native mangaka (comic artists) from Indonesia, re:ON Comics tries to revitalize local comics magazine market that has been stagnant for a long time. The print magazine is distributed through bookstores and select convenience stores across Indonesia each month. The print version and online version has different contents, though some stories may relate to each other.

Until September 2015, re:ON Comics has released 16 volumes containing several comic series with different genres. re:ON has Hindu mythology-inspired fantasy series in The Grand Legend: Ramayana, action series such as Galauman, which presents a unique idea of a guy who transforms into a superhero when experiencing heartbreak; or the school gang battle series Tawur. It has comedy series in a story about a fortune-cat statue titled Lay Lay Cat, and also in Bachelor’s Brotherhood that depicts the daily lives of a trio of single young men. Romance is represented with titles such as Lemon Leaf and Me vs Big Slacker Baby. Another title, Hyper Fusion Cyborg Idol Rinka, combines elements from action and romantic comedy genres. The series have had their own respective fanbases.

Marketing a product to the public is an inevitable task for any company. So far, re:ON does a pretty unique way of doing it. Their mascots are among the most interesting aspect to re:ON’s marketing strategy. We are introduced to cheerful girl Reon and her cunning older sister Reyna, who are brought to life by cosplayers Franzeska Edelyn and Matcha Mei. They even star in re:ON’s promotional video. Another influential marketing technique comes from their social media approach, an unarguably great method for every company to promote their business if done right.

Relying only on the sales of the comics is not sufficient. There needs to be more diverse attempts to widen the market, and most importantly, to sustain its identity in Indonesia. re:ON has often been present in various pop culture conventions, selling their comics, art books and photo books, posters, and various other merchandises at their booth. And then, in April 2015, re:ON held it’s own convention, re:CON, in a local shopping mall in Depok, West Java. In this event, the comic titles under re:ON’s management have a chance to be promoted to the broader public. Other than selling their usual products and introducing the comics to newcomers, this event also saw the launch of the first compiled volumes of The Grand Legend and Me vs Big Slacker Baby. In addition, there were some competitions such as cosplay competition of characters from re:ON’s comics, and talk shows with the comic artists and guest cosplayers.

The success of re:ON’s brings more publishers to follow the bold steps that re:ON has taken. May 2015 saw the debut of Shonen Fight, a magazine specializing in shonen genre, with licensed editorial system based on Japanese manga magazines, and employing a consultant and chief editor from Japan. It is headlined by some award winning comic artists such as K. Jati and Mukhlis Nur. More recently, KOSMIK has made its debut as well. This reincarnation of MAKKO online comic publisher brought Si Juki – one of the most iconic online comic characters in Indonesia at this moment – as one of its “main star”. This shows that people’s confidence towards local products, especially in comics, is showing a movement to a positive direction. KAORI has been supporting and documenting this development by publishing the latest news from Indonesian creative industry. The expectation is for the movement not to stop at where it is at the moment, but will continue to grow and grab attention from the world, including especially, among Indonesians themselves. 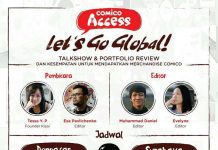