Lucifer, one of Heaven’s Archangels, have been cast off to the depths of Hell. There, she met Leviathan and seven demons known as the Seven Deadly Sins. Lucifer sets off on a journey to defeat them, together with Leviathan and a human named Maria whom she encountered on the way to hell. 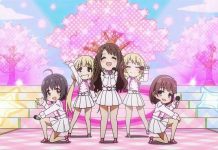