In the anime industry, 3D computer-generated (3DCG) animation often received bad reputation among fans. Anime fans generally seem to reject the idea about 3DCG animation being as an alternative technique, or even used in tandem with traditional hand-drawn animation. For fans, 3DCG is considered weird looking, distracting, and breaks immersion. While some of those criticisms are valid, that does not mean anime studios have to wholly avoid 3DCG animation. With further experimentations and experience, 3DCG animator can get even closer to solve those problems. One of the better anime, probably even the best, that have tried to overcome those assumptions is Studio Orange’s Land of the Lustrous.

Land of the Lustrous (Houseki no Kuni) tells a story about a world inhabited by gemstones, whose body and mind resemble human, living under the guidance of a mysterious monk called Kongo-sensei. The gems cannot die, but they can break if they get too much damage. Their existence is threatened by another life form called lunarians. The lunarians is came from the moon to collect the gems. It is unclear how this battle could be ended, but it has already happened for more than a thousand years.

One of the gems is Phosphophyllite, or usually called Phos. Phos is the youngest of the gems, have only lived for 300 years. As a gem, Phos wants to fight the lunarian. Unfortunately, Phos’ body is too weak. Phosphophyllite’s hardness is only 3.5 in mohs scale, which means Phos is too fragile and can break down easily.

Thanks to that, Sensei only gives easy tasks to Phos like completing an encyclopedia. Phos reluctantly accepted these tasks because they thought there is nothing else they could do. But while doing this task, Phos met Cinnabar, or usually called Cinsha. At first, Phos is afraid with Chinsa. Later, Phos found out that Cinsha has suffered even worse condition than Phos. Cinsha’s hardness level is lower, only 2 in mohs scale, and they also have a poisonous body containing mercury. To Phos, Cinsha openly admited that with their condition, they do not have any reason to life, so Cinsha waits for the lunarians to kill him. After seeing another gem with even more miserable life, Phos was determined to find something that Cinsha can do, so Cinsha can stop feeling that they have no purpose in life.

While studio Orange is a 3DCG animation studio, that does not means Land of the Lustrous uses full 3DCG animation in every scene. To overcome some limitations of 3DCG, studio Orange creatively mix their 3DCG animation with hand-drawn animation. Some of the facial parts, for example, are actually hand-drawn. It makes the facial expressions of the characters more expressive when the situation requires. Other 3DCG works are often criticised because the characters feel cold. Fortunately that is not the case with Land of the Lustrous.

Hand-drawn animation is also used in some detailed cuts, like close up shots where the finer movements of body parts need to be captured, or to create special effects in action scenes.

However, Land of the Lustrous animation is not good simply because it uses 2D hand-drawn animation. Studio Orange certainly understands that as 3DCG anime, Land of the Lustrous has its strengths and limitations. While they use hand-drawn animation to overcome the limitations of the 3DCG, the 3DCG parts also look amazing. The CGs are crafted beautifully with great attention to detail, like the light reflected from the characters’ hairs to their shoulders.

The 3DCG animation also leads to some gorgeous action scenes. One of the strengths of 3DCG scene compared to hand-drawn animation is in how it’s easier to move the camera around, helping to create dynamic action scenes. In Land of the Lustrous, not only they nailed it, but they also successfully pushes the limits of what 3DCG anime usually does in TV series. There is a chase scene that consists of a continuous uninterrupted shot that lasts for two minutes. Another scene also shows an intense battle that, except for a cut in, lasted continuously for one a half minute on screen.

The end result looks fantastic. By combining 3DCG and hand draw animation, Land of the Lustrous provide some of the most gorgeous-looking animation and beautifully-crafted cinematography. The 3DCG scenes feel dynamic, while hand-drawn special effects make the whole scene feels more lively. The scene below, for example, shows how Diamond move freely in the frame and how hand-drawn effects (dirt effect while running) blend well with their movement and makes it feels faster.

Further note, the scene in Land of the Lustrous was also composed with the help of 2D animator. In a scene in episode 8, animator Norio Matsumoto actually drew 300 cuts as guide for 3D animators before they animated the scene. It is really helpful because as a skilled animator, Matsumoto really knows how to stage a scene and how characters should move within a frame. These cuts are available on youtube, while comparison with the end result can be seen here (however, be mindful that those links contain spoiler).

Next Page: Closer look into Land of the Lustrous’ story and narrative 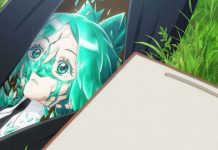 Fall 2017 Anime: Land of the Lustrous