After releasing the demo on itch.io, Indonesian game studio StoryTale Studio has finally announced the release date of Pamali: Indonesian Folklore Horror. The announcement was made on Friday (21/12) on the studio’s social media accounts. The announcement mentions the game will be released on 28 December 2018 and will be available on Steam.

The game will become the first part of a four-parts story that focuses on Indonesian horror folklores. The first folklore will be titled White Lady, which is inspired from Indonesian ghost kuntilanak. While the other folklores released date have not been confirmed yet, it has already been announced that the other three folklores will be inspired by pocong, tuyul, and leak.

In Pamali, the game’s objective is to explore the area without violating any taboos (pamali is a term used by older generations in Indonesia to refer to something that is prohibited and mustn’t be done, and brought curse to the person who breaks it). While exploring the area, the player will be confronted by ghosts like kuntilanak, pocong, tuyul, and leak. The player can choose to fight them or just pass quietly. The player has to be careful because when a taboo is violated, bad things will happen to the player.

Previously, the game was announced as a Kickstarter project launched in July 2018. While the first project was unsuccessful, Pamali managed to raise over £ 8900 (about US$ 11,000). The project finally succeeded in its second Kickstarter attempt and was announced to be released in Q4 of 2018. On November 2018, StoryTale Studio also announced a partnership project with Maple Whispering to translate the game into Chinese.

Founded in 2016, StoryTale Studio is a Bandung-Based game studio that focuses on game development, cross platform apps, and animation. Prior to this game, StoryTale Studio has also developed As If, a game about mental health, and My Safe House, a short thriller game 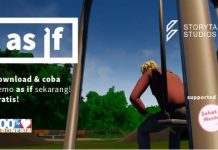 StoryTale Studio to Release “As If”, a First Person Narrative Game About Mental Health