It has been fifty years since humankind began migrating to the new frontier of Mars. Most things are produced and worked by Artificial Intelligence (AI). From transportation to food, all people seemed satisfied and content to be passive consumers of these technologies.

There’s a girl scraping her way to live in the huge metropolis of Alba City jumping from one to another part-time job and her name is Carole. She has always felt like something is missing. There’s another girl running away from her home who was born into a wealthy family in the town of Hershel City and her name is Tuesday. She has always felt like the loneliest person in the world. The two of them dream to become musicians and a chance meeting brought them together. They want to sing. They want to make music. This is a story of two girls who set it all in motion.

I am a self-proclaimed music geek and am easily swayed by the wonders of music. And I am personally interested in the series because Nulbarich composed the opening theme for this anime. Nulbarich is a J-Pop group with only one fixed member, Jeremy Quartz (JQ), who debuted in 2016 One week before this anime was aired, they posted a short version of the music video of the opening theme, Kiss Me, showcasing a snippet of what would be coming for this anime. It is very cool and catchy at the same time while the vocalists, Nai Br.XX and Celeina Ann, will definitely sway everyone with their beautiful voices.

Carole & Tuesday is practically a goldmine for music geeks out there. From the very first episode, this anime already referenced American singer Cyndi Lauper with Tuesday’s monologue and the episode title. In the monologue, Tuesday recounted Cyndi Lauper’s story of running away from home at the age of 17 which Tuesday related herself to. The episode title is taken from one of Cyndi Lauper’s work, True Colors, which is her second song to hit number one on the Billboard Hot 100 Chart and that song really resonated with the episode as every character has a true color but are troubled to show them to others. Even the music instruments used by Tuesday and Carole are sure to delight music geeks. Carole uses a Nord keyboard which is modified to be foldable and to fit the futuristic setting of the anime and Tuesday uses a Gibson Hummingbird which is distinguished by its beautiful hummingbird ornate on the pickguard. But more importantly than just the references is the music and how they introduced us to it.

This anime treats music not just as something to be played or heard but as something to be felt and related to. From the beginning, the anime tells us that while having different goals, all of the characters are connected indirectly by music either by their desire or by their motivation. This laid a perfect groundwork of how the music should impact the audience such as when Carole first played her keyboard and hummed the melody. From that beautiful short melody, we can know that Carole wanted to express her feelings towards music but could not find any words to represent her feeling of sadness and so, she just sung it away without any lyrics. This is where Tuesday filled in the blank and helped her find the words she wanted to say. They completed their first song together which is very beautiful and heartful. Visually, Carole & Tuesday is also pleasing, particularly with its landscapes and backgrounds.

In the end, Carole & Tuesday is a treat for music fans with its great music and astonishing visuals and it still has so many potentials yet to be uncovered. 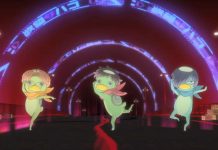