On Thursday (22/8), the official Facebook account Creators Super Fest has announced that one of the members of the 22/7 (Nanabun no Nijuuni), idol group, Fujima Sakura (C.V. Amaki Sally) will give a special message in the event in Surabaya, Indonesia. It will also be Fujima Sakura’s first appearance in Indonesia.

In addition, the event rundown posted in Creator Super Fest Facebook page mentions that Fujima Sakura, along with other virtual guest stars Maya Putri, KMNZ, and Mintchan will be present only on Saturday. The twitter account of Fujima Sakura also confirms that her appearance will be in the form of a video.

I’m not going to Indonesia this time!!!! (Yet😘) Im sending a video です！
Maybe next time だね🥰

22/7 is an idol group project created by Yasushi Akimoto, Aniplex, and Sony Music Records. The  project is described as “idols who transcend dimensions.” The audition for the project was held in 2016 and have chosen 22/7 as the name. The group has already released four singles since their debut in 2017 and an anime series about the group is set to premiere on January 2020.

Creators Super Fest is an annual creative event held in various countries in ASIA. In 2019, Creators Super Fest in Indonesia will be held in two cities, the first is in Surabaya that will be held on Saturday and Sunday, 31 August-1 September 2019 at Chameleon Hall Tunjungan Plaza 6, Surabaya. The second will be held in Jakarta on Saturday and Sunday, 26-27 October 2019 at SMESCO Exhibition Hall Jakarta. The guest stars in the Surabaya event includes cosplayers Mon from Taiwan, Heyleydia from Thailand, and Nekonoi Katsu from Indonesia, and also musicians D-Yama from Japan, and Vibetronic and Soba from Indonesia. 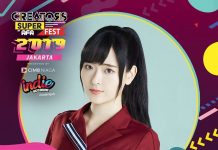