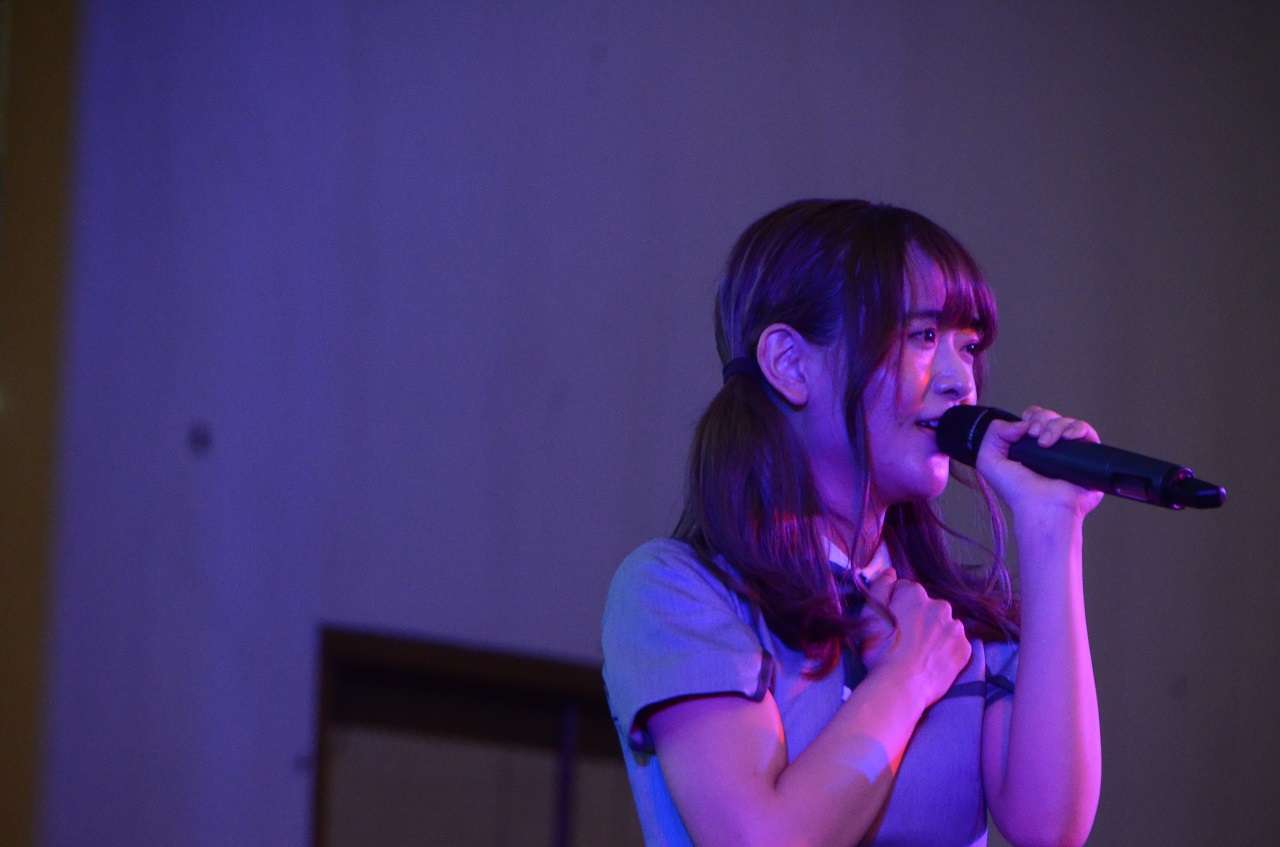 Last October, American-Japanese voice actress Sally Amaki was present as a guest star in Creators’ Super Fest 2019 event in Jakarta that took place at SMECO Convention Hall, Jakarta. Known as the voice actress of 22/7 (Nanabun no Nijuuni) idol group member Sakura Fujima, Sally herself is known for her outspoken character on the Internet. She likes to post memes and other funny things on Twitter. Because of that, fans dubbed her “meme queen”.

Amidst her busy schedule, Sally also met with KAORI and other media in an interview session that took place at Mercure Hotel Gatot Subroto. In that session, Sally answered many questions from the media including her life as a voice actress on Japan, her favorite anime, and her reputation as “meme queen”.

For you, what’s special about Indonesia
Well, the people, first of all. The second I got off the airplane, everybody was really nice to me. And when I had rehearsals for the stage event today, people also welcomed me. And online too, when  it was announced that I am coming to Jakarta, everybody was really enthusiastic about it, so I have positive images about Jakarta.

Your fans on the internet dubbed you “Meme Queen”. What do you think about that title?

I am flattered, first of all. It feels like “Queen” is such a big title. Given a title for the things that I say is overwhelming, it makes me really happy. I don’t really try to post memes. I just have a goal to make people who follow me smile or at least make their day a little bit brighter. I want to make people happy, so for people to recognize me as such is great.

What do other 22/7 members think about your meme?

They were surprised, because at first, I was really shy and could not really talk Japanese much. They always ask me to teach them memes because they also want to communicate with people overseas. But it’s hard to translate these memes to Japanese. If you have any ideas, please leave it on my Twitter!

Compared to other idols, you are quite open on social media. Why?

Personally, I like to know what idols or voice do in their daily life. I feel more connected because when I read their posts about daily life, it made feel like “they’re just like me”, makes me feel welcomed and in the community. When I wanted to become a voice actress, an idol, my goal is to make people happy and feel “included”. So I felt that by sharing my daily activities and having people know that idols and voice actors go through the same struggles, I felt like it’s a better way to communicate with people. So, that’s why I do it.

One of the JKT48 members, Pucchi, is your fan. Have you ever met her?

We actually already met once in Akihabara. We exchanged phone numbers. We also plan to meet on Sunday. She already told me that she wants to meet me at this event.

What was your reaction when you first heard about the 22/7 anime announcement?

At the audition in 2017, we were already told that there will be anime too, but the date wasn’t set yet. But then in September 2019, the date was actually announced  So, all the members had waited and prepared for the anime for two years. We were actually really excited, more than nervous. But also nervous too, because there was two years of waiting period for everybody, so I feel like we have to make the anime even better than what people would expect. So yeah, I’m really excited.

Can you tell us a few more details about the story?

No, sorry. I can’t tell you guys right now or else I would be in big trouble (laughing). What I can tell you is that it will tell the story about 22/7 members before they became idols.

What about the character you voiced, Sakura Fujima? What do you think about her?

Love is the first word that comes to mind. She is so cute. During my audition, her character was already on screen, and I instantly fell in love. She’s really a nice girl too, and she thinks about all the other members. And she can speak English because she comes from Los Angeles, just like me, so I feel really connected. Feeling connected to a fictional character is like a dream comes true. So, yeah, I love her.

You voices a character who is also a virtual Idol. What do you think about that?

I find it amazing, because our group right now works mainly in Japan so we haven’t really been able to communicate with a lot of people overseas. But with virtual idols, you can just put on VR goggles and see the idols as if you’re with them right now, making it easier for people who can’t come to Japan to know our group.

What is Sally’s favourite anime? Are there any difficulties that she experience when she work in Japan? What is “Gintoki/Kuroo Enthusiast” even means? Find out on the next page.