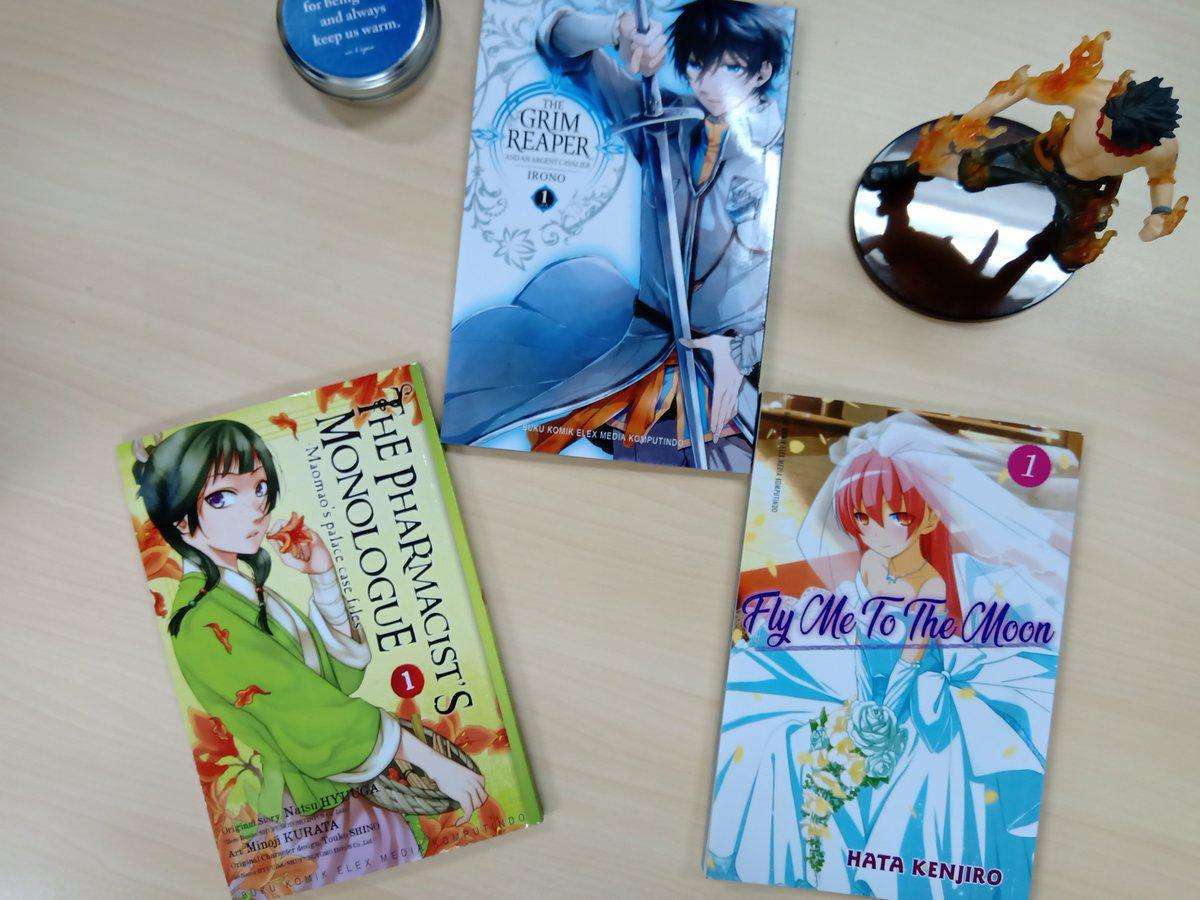 On Friday (20/12), the Twitter account of Elex Media Komputindo’s Editor of Comics has posted a picture of new manga titles that are scheduled to be released in the week of December 23, 2019. The manga included in the picture are the first volume of Kenjiro Hata’s Tonikaku Cawaii, which will be published with the title Fly Me to the Moon, Irono’s The Grim Reaper and the Argent Cavalier, and Minoji Kurata’s adaptation of Natsu Hyuuga’s light novel The Pharmacist’s Monologue.

Tonikaku Cawaii tells the story of Nasa Yuzaki, a boy who was made fun of by others because his name is written with the characters for “starry sky” but pronounced like the US space agency, which made him determined to become someone who would not be made fun of. He got into an accident while having a fateful encounter with a cute girl who then saved him. Asking her to go out with him, and she agreed to it if they get married. After disappearing, the girl, whose name is Tsukasa, comes to Nasa’s small apartment two years later and calls him her husband.

Kenjiro Hata started the serialization of the romantic comedy manga in Shogakukan’s Weekly Shonen Sunday in 2018 after his previous series, Hayate the Combat Butler has been finished. The manga has also been collected into eight tankobon volumes so far.

Shinigami to Gin no Kishi or The Grim Reaper and the Argent Cavalier sets in the world where humans are threatened by soul-devouring creatures called Larvae created by the Grim Reaper. The main character, Cyan, is a member of the Argent Cavalier, an order created to combat the Larvae, who sought to protect those he hold dear even if it’s going to risk him everything.

The fantasy manga by Irono began serialization in 2014 in Square Enix’s GFantasy magazine. The series has been collected into six volumes.

In Kusuriya no Hitorigoto or The Pharmacist’s Monologue. there lived a pharmacist named Maomao in a certain kingdom. One day, a group of bandits kidnapped her and sold her to work for a courtesant at the royal palace. At the same time, a rumor about the heir of royal family being cursed spreads, and one of the palace’s eunuch, Jinshi, asked Maomao’s assistance to solve the case.

Natsu Hyuuga began serializing The Pharmacist’s Monologue as a web novel on the website Shousetsuka ni Narou in 2011. The publisher Shufunotomo has been publishing it as a light novel series in their Hero Bunko label since 2012. Minoji Kurata’s manga version has been serialized in Shogakukan’s Monthly Sunday Gene-X since 2017 and has been collected into five volumes so far.

DISCLAIMER:  the availability of books at bookstores / agents may differ from the planned schedule, especially for regions outside of Java island. Detailed explanation can be seen at point Q11 in ELEX FAQ. To obtain accurate information regarding the availability of the book, it is advised to contact the Customer Service of your stores of choice for confirmation. For Gramedia bookstores, the contact numbers can be obtained via email customercare@gramedia.com.