On Wednesday (22/01), the official Facebook account of film distributor, ODEX Indonesia has revealed the release date of “KONOSUBA – God’s blessing on this wonderful world! – Legend of Crimson” anime film. The film will first receive a special Fan’s Screening on February 1, 2020 at CGV Cinemas fX Sudirman, South Jakarta, followed by general release starting from February 8, 2020. The Fan’s Screening will include merchandise like KONOSUBA t-shirt and poster, but the cost for the Fan’s Screening has not been announced yet.

The film is directed by Takaomi Kanasaki who also directed the previous two anime seasons along with the other TV series’ main staff. scriptwriter Makoto Uezu and character designer Koichi Kikuta. Masato Kouda composed the music while the film’s theme song is performed by Machico. The TV series’ cast also return to reprise their roles.

KONOSUBA or short for Kono Subarashii Sekai ni Shukufuku o! is a light novel series written by Natsume Akatsuki and illustrated by Kurone Mishima, originally published on Shousetsuka no Narou web novel platform before getting picked up by Kadokawa Sneaker Bunko imprint. The novel tells about Kazuma, a hikkikomori who just died and revived in another world by a goddess named Aqua. Taking the inept goddess with him to the MMORPG-like world, Kazuma started his new life and formed a party with Aqua, joined by the explosion-obsessed wizard Megumin, and the masochistic crusader Darkness. The dysfunctional party adventures together to defeat the Demon King.

The light novel has reached 16 volumes and has been adapted into two seasons of TV anime tv series also have been aired two seasons on 2016 and 2017. 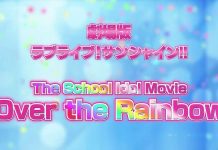 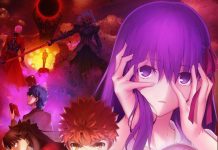