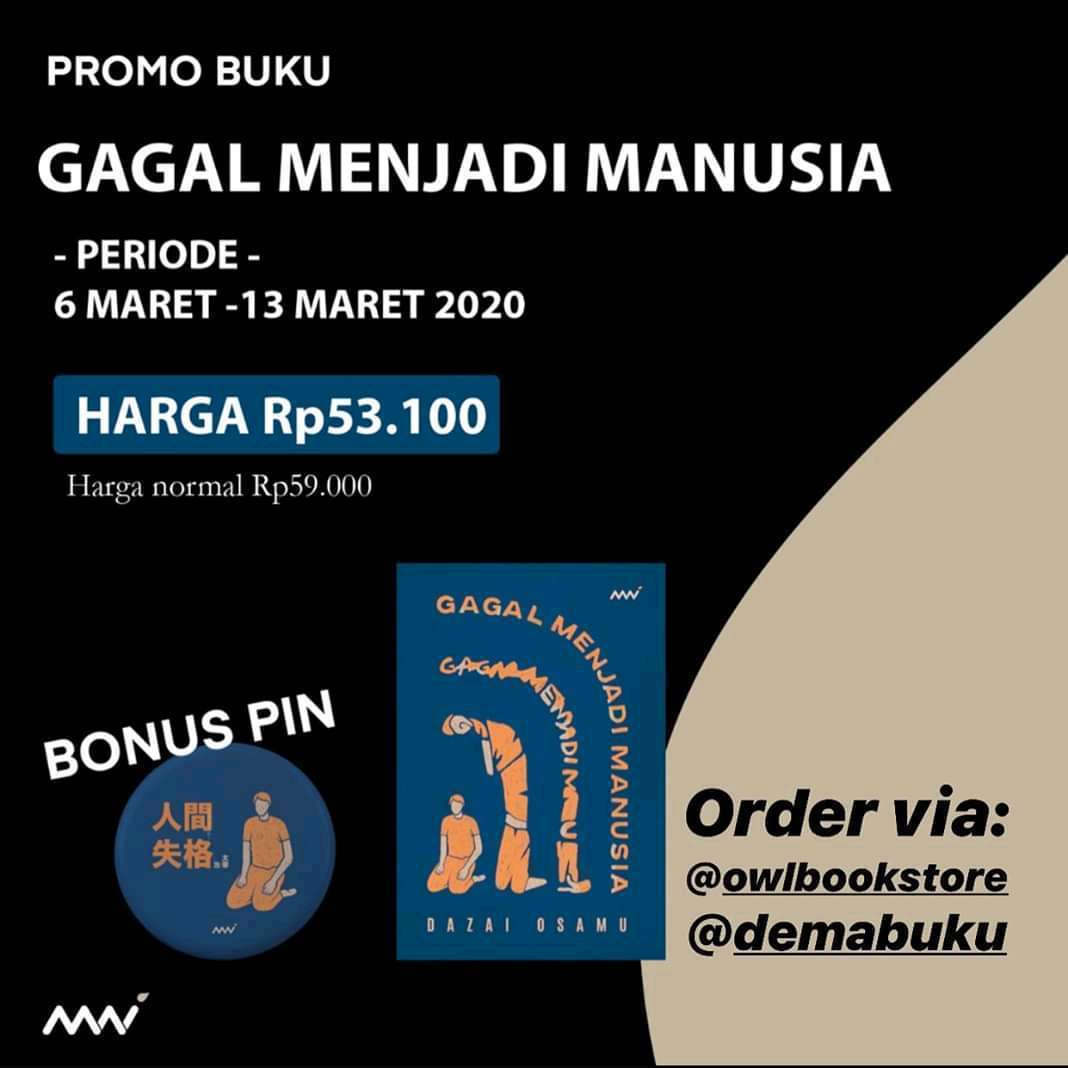 Penerbit Mai has published Osamu Dazai’s classic novel No Longer Human (Ningen Shikaku) in Indonesian with the title Gagal Menjadi Manusia. The book is not to be sold in any bookstore and only available through orders on online bookstores Demabuku and Owl Bookstore. Further, from 6 March until 13 March, the book can be purchased with the special price of IDR 53,100 (about USD 3.7). A pin is included as a bonus.

No Longer Human is a Japanese novel written by Osamu Dazai in 1948. The English translation by Donald Keene was first published in 1958. It tells the story of Oba Yozo’s journey as he struggled to reveal his true self, but ended with maintaining a façade of hollow jocularity. The work is presented as a series of memoranda chronicling Oba’s life from his early childhood to his late twenties. Some says that this book is the writer’s last wish, because Dazai committed suicide after finishing this novel.

Amazon described the novel as follows:

Portraying himself as a failure, the protagonist of Osamu Dazai’s No Longer Human narrates a seemingly normal life even while he feels himself incapable of understanding human beings. Oba Yozo’s attempts to reconcile himself to the world around him begin in early childhood, continue through high school, where he becomes a “clown” to mask his alienation, and eventually lead to a failed suicide attempt as an adult. Without sentimentality, he records the casual cruelties of life and its fleeting moments of human connection and tenderness.

No Longer Human has been adapted into many works, such as films with the same title in 2009 and 2019. Usamaru Furuya has also made the manga version of the novel. It has also appeared in some anime, such as in  Aoi Bungaku four first episodes.  Bungo Stray Dogs includes a character based on Osamu Dazai, with various influences from the novel. Most recently there is the sci-fi adaptation titled Human Lost, which isset in the future but took many elements from the novel.

In Indonesia, Basabasi has also published the book earlier in January 2020 with the title Orang Gagal. The translation is by Muhammad al Mukhlishiddin and has been sold in several online bookstores.