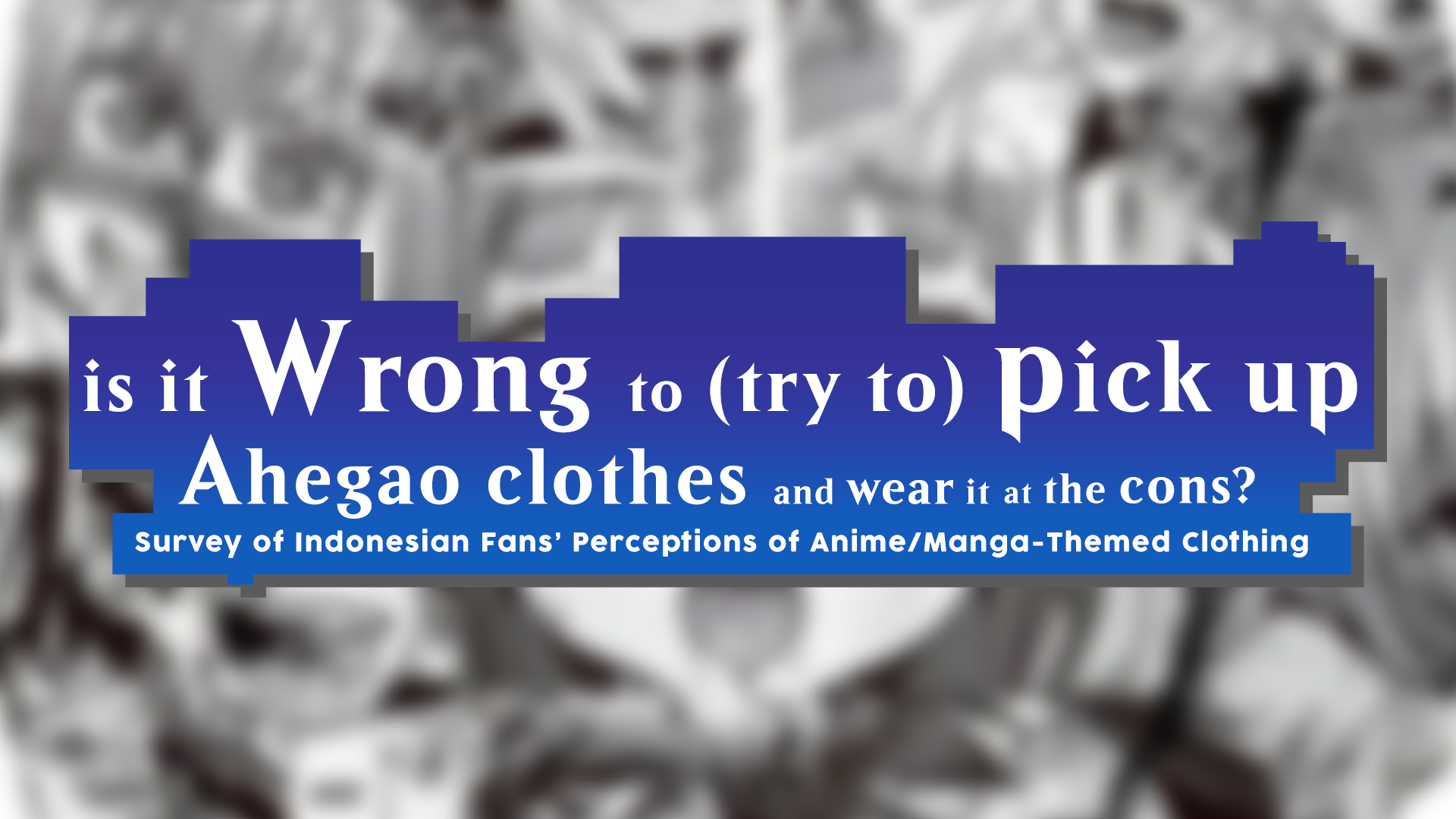 Clothing with pictures of anime or manga characters have become a popular way for fans to show what series and characters they like, and has been observed to help fans recognize and identify other fans. People wearing the clothing can often be seen mainly at events, but they can also be observed at cinemas, malls, public transportation, and other places.

In the third quarter of 2019, KAORI Nusantara conducted a survey to learn about how the practice of buying and using anime/manga-themed clothing is perceived in the fan community in Indonesia, both by the people having them and by people who don’t have them. The survey was conducted in two phases. In the first phase, we gathered responses directly from visitors of three events. The first two were the 12th Comic Frontier and the 25th Gelar Jepang Festival at Universitas Indonesia, both held in the Greater Jakarta area; and the third was the 6th Utsuru in East Java. responses were collected from these events. After the events, we took more responses by sharing the link to the survey form online on KAORI’s social media platforms. In total, there are 1,100 responses collected in the survey.

This survey also looks at the respondents’ opinions regarding the controversial use of clothing with pictures of ahegao, which could also be seen at Indonesian events/cons. Ahegao refers to exaggerated ecstatic facial expressions that characters in erotic manga and anime usually make during climax in sexual activities. Typical characteristics of ahegao are rolled eyes, flushed cheeks, and extended tongue, and as can be observed during direct data collection at events, the clothing usually shows the faces of female characters. The clothing has drawn considerable complaints that some anime conventions in the West has banned them. In this survey, we are looking for what our respondents in Indonesia think and feel about wearing the clothing or seeing other people wear the clothing, thus, the question of the clothing’s legality is outside of the scope of this survey. At the aforementioned events, our staff have also been able to directly get some event visitors who wear ahegao clothing to give their responses to this survey. 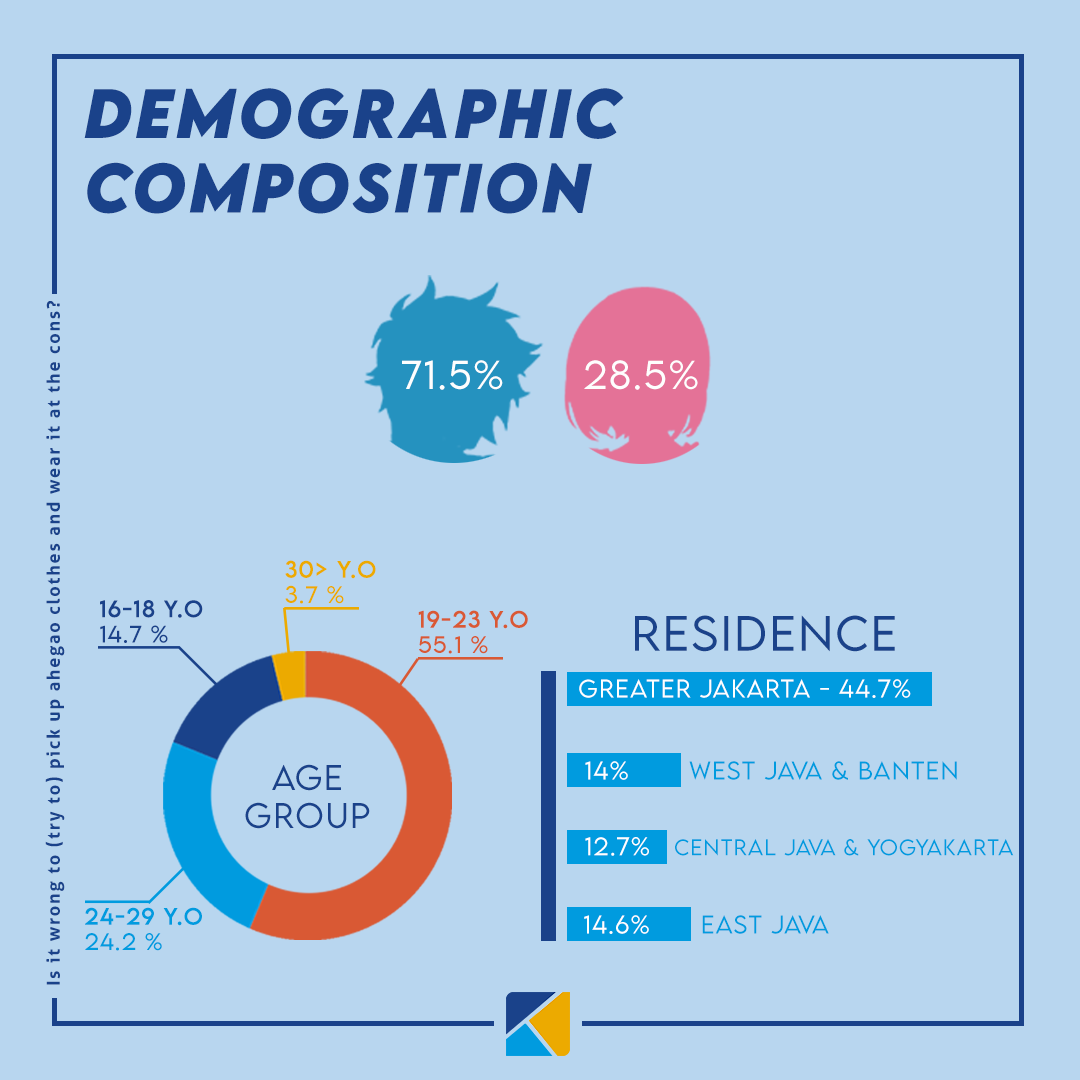 Most of the responses received are from regions in Java. 492 respondents or 44.7% claim to live in the Greater Jakarta area, which includes the Jakarta Capital Region and the surrounding cities of Depok, Tangerang, South Tangerang, Bekasi, and Bogor. East Java province, where we conducted one of the field data collection, provides 161 responses or 14.6%. This is followed by respondents from West Java and Banten provinces (other than the aforementioned cities), with 154 responses or 14%; and Central Java and Yogyakarta provinces, with 140 responses or 12.7%.

The majority of the participants to this survey report having anime/manga-themed clothing. 468 respondents report having two to five of them, 204 others report having only one, and only 116 have more than five. 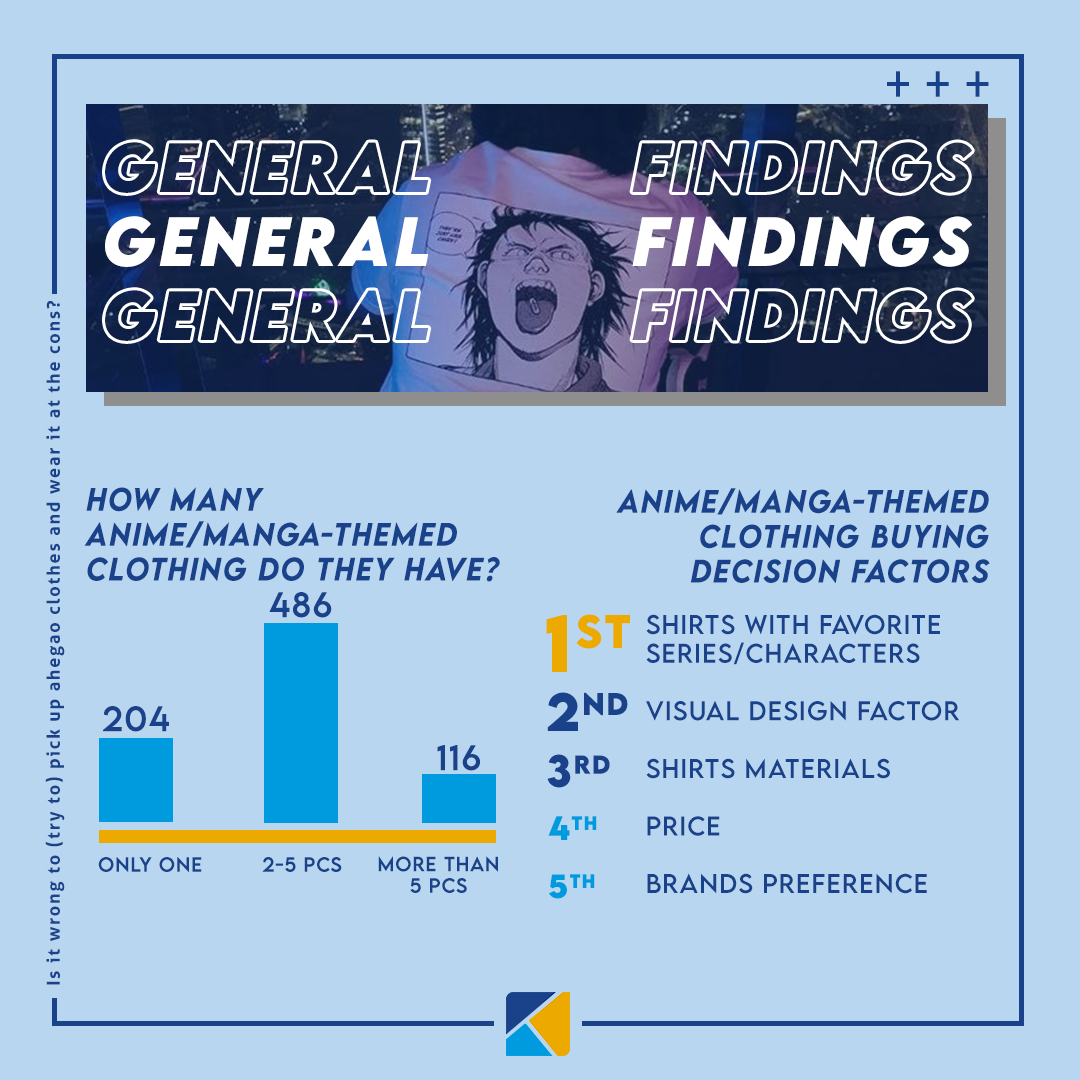 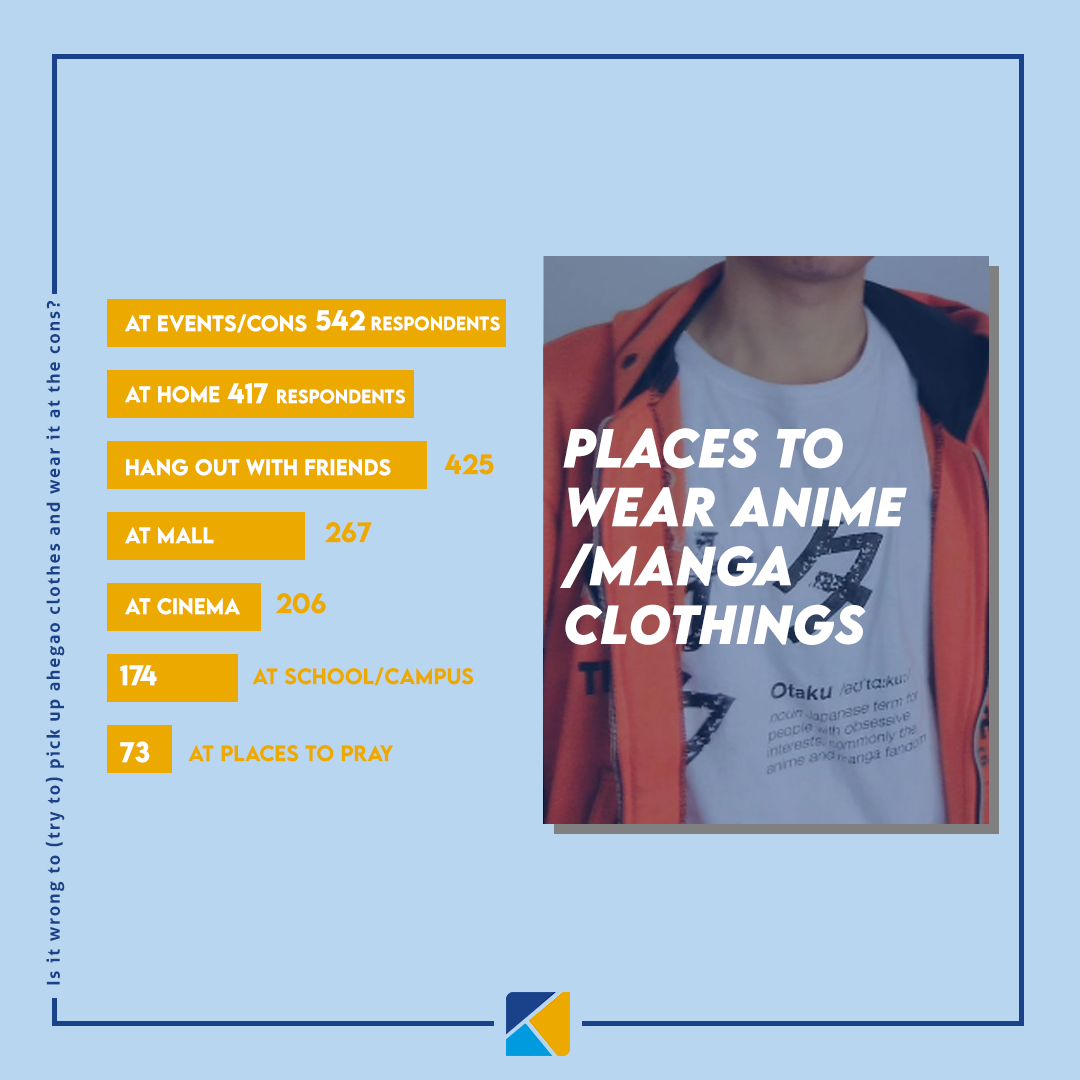 Next we ask the respondents who have the clothing in what places or situations do they usually wear them. As might be expected, these clothing are usually used in casual or leisurely situations, mainly at events/cons with 542 respondents, followed by when hanging out with friends and at home with 425 respondents and 417 respondents respectively. Mall and cinema are some leisurely places where the clothing might be worn, with 267 and 206 respondents choosing them respectively. Very few mention wearing them at office, but 174 report wearing them at school or at campus, and there are 73 claiming to wear it at places to pray. 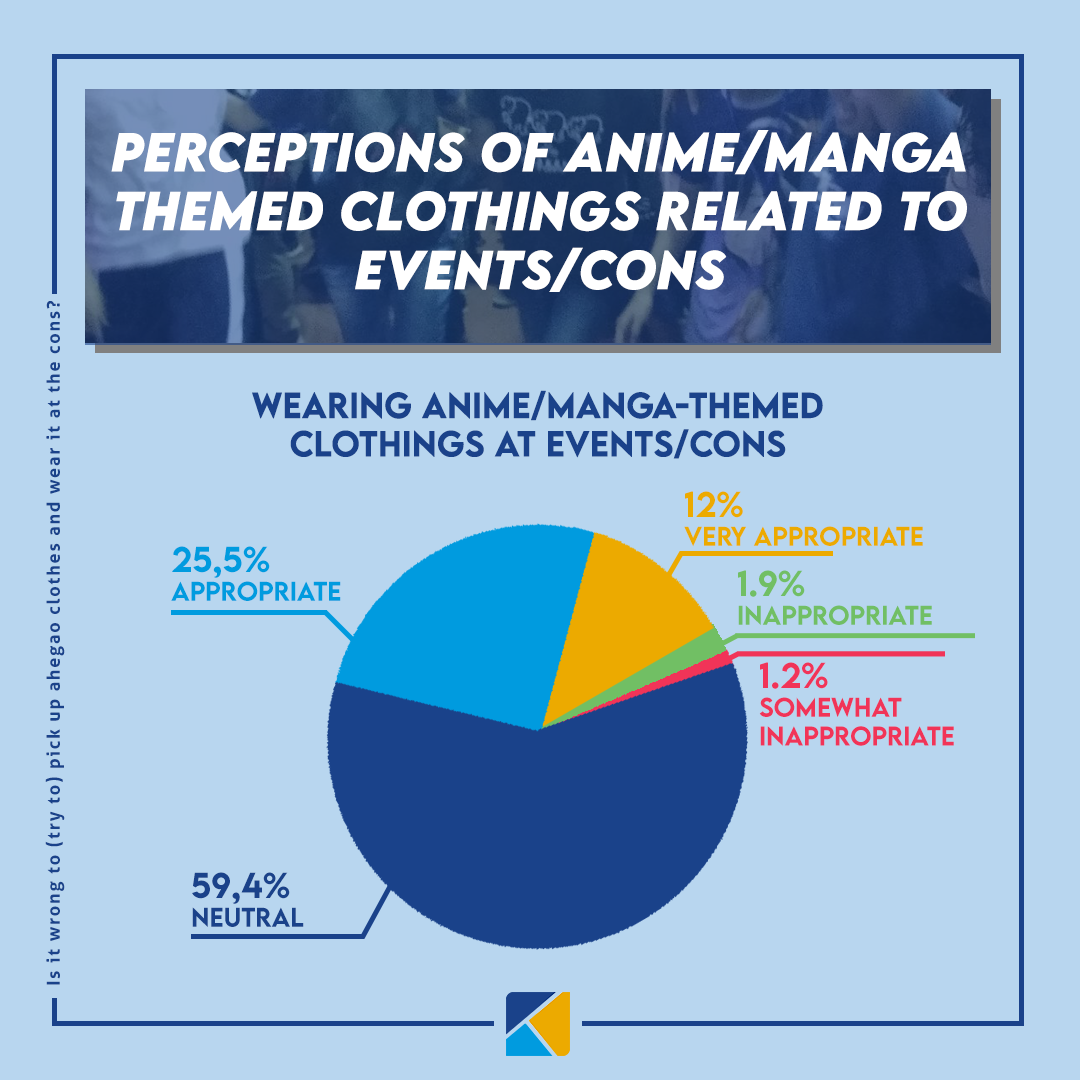 Those numbers tell how people who have anime-themed clothing use their clothing. But how do the appropriateness of the usage in various situations being perceived generally? Next we ask the whole respondents, first on how appropriate do they think wearing the clothing at events and cons is. The majority of respondents do not perceive it negatively, with 653 perceive it neutrally and 412 think it’s somewhat appropriate or very appropriate. Reasons cited in general say that because pop culture events or cons are places to enjoy interests and hobbies together with others, it is also fitting to express and show those interests to others including through clothing. The clothing might even help to identify others with similar interests.

“It’s appropriate to use the shirts at events since they are the places meant to express your love for anime.” (Male, age 19-23, East Java)

“Everyone has their own interests and wearing anime clothing is a normal means to show their interests.” (Female, age 24-29, East Java)

“Yes, it’s appropriate, and the shirts are also identity markers that can make us find friends with similar hobbies or to recognize someone’s fandom.” (Male, age 24-29, Greater Jakarta) 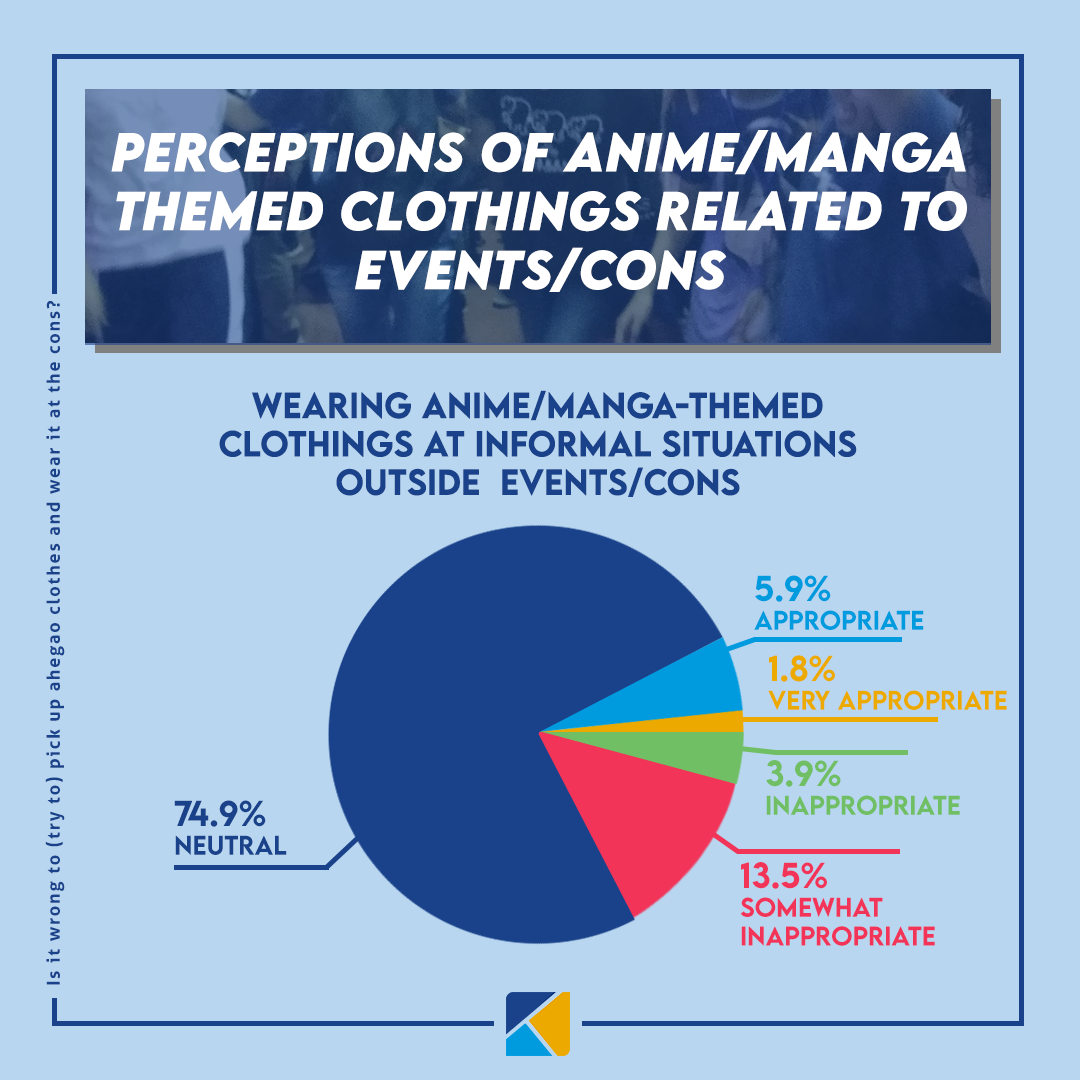 How about using the clothing outside of anime-related events? When it comes to using them in casual situations, there are more respondents who perceive it as somewhat inappropriate, but the majority with 824 respondents feel neutral about it. In general, wearing shirts with anime designs is seen as being no different from wearing shirts featuring any other designs or hobbies that the wearer like, so the right to wear them is to be respected. But perhaps not surprisingly, the majority of respondents perceive wearing anime shirt in formal situations to be somewhat inappropriate (395 respondents) or very inappropriate (531 respondents), due to T-shirt being generally considered less suitable for formal occasions unless the dress code allows them. 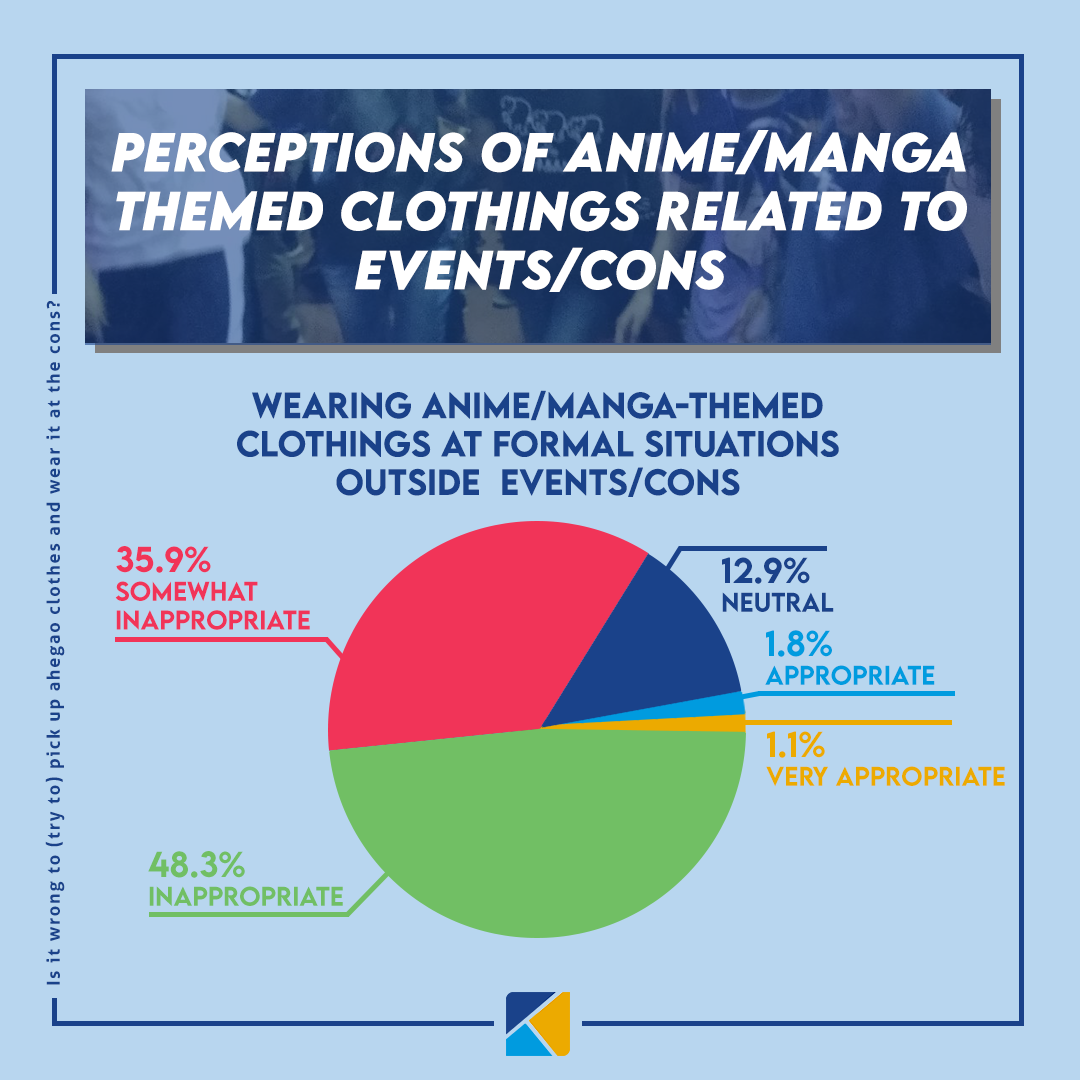 “Wearing shirts like that tends to distract while in a meeting, though I admit to wearing anime shirts to my workplace.” (Male, age 19-23, Greater Jakarta)