“Hello, boys and girls! Do you like guys with more than one side to them?” 31-year-old Uramichi Omota is the gymnastics coach in the children’s educational TV program “Together with Mama.” He might be sweet on the outside, but all boys and girls are inevitably scared off whenever they get a glimpse of the adult darkness that’s the result of Uramichi-sensei’s emotional instability. This is a tragic eulogy to all the “boys and girls” who are now adults!

Imagine a character like Hachiman from Oregairu, but is 31 years old and his cynicism comes from work-life jadedness rather than relationship insecurity. That’s basically Uramichi Omota. Uramichi has a dim and pessimistic personality, even though he works as the host of a kid’s show. Because of that, he has to suppress his negative personality when doing his job. He (unconvincingly) makes a fake cheerful expression in front of the kids because he believes that’s “his job”.

For many working adults in their 20s or 30s, there are a lot of things to relate to in this anime. The jokes in Life Lesson with Uramichi-Oniisan come from something that young people are experiencing right now. Unfulfilling work life, the inability to fully give up old dreams, or realizing how your body isn’t as healthy as it uses to be. There are many moments in this anime that will make respective viewers will laugh and think “yup, that’s me. I’ve been there before. Thanks for pointing out, Uramichi-oniisan”.

Life Lesson with Uramichi-Oniisan‘s jokes heavily rely on cynicism. Because of that, the jokes can feel too one dimensional for some people. But there are a lot of potential discussion things to discuss here. Why are young people today so cynical? Why is a constructed identity needed for some people to survive? Why do people tend to feel unfulfilled while their basic needs are already fulfilled? Maybe it’s true that Life Lesson with Uramichi-Oniisan‘s joke only works on certain people groups. However, its ability to connect with the audience could make it more than a comedy anime. In conclusion, Life Lesson with Uramichi-Oniisan is not only an interesting comedy anime to watch, but also interesting commentary about the current younger generation to think about. 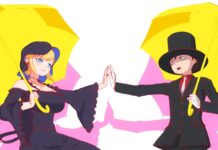