It’s always good to see new anime with good storytelling. In this summer, I was awed by the warmth of the story of middle-schooler Kageyama Mob and his mentor Reigen Arataka in Mob Psycho 100. But then again, in the same season, there is one series that can be said as dark horse: 91 Days is under the radar for most anime fansbut it shouldn’t be missed out.

91 Days occurs to pay homage to many mafia stories, most notably The Godfather. The most significant similarity is found in the main character’s background. Angelo Lagusa is the only survivor of the slaughter of his family by the friend of his father, Vincent Vanetti. Seven years after that incident, he received a letter revealing the culprits of that murder. He decided to fulfill his revenge by sneaking his way to Vanetti family by redefining his identity as Avilio Bruno. For those who have seen The Godfather Part 2 this should remind you a bit of the part where Don Vito Corleone himself was the only member of the Andolini family who survived a very similiar experience with Angelo’s.

The other thing that 91 Days share with other mafia stories is, of course, the conflict that happened in the mafia families. Betrayal is not a rare word to be found in such kind of stories. As many characters from different kinds of clans are introduced, such as the notorious Orco family, or the glorious Galassia family that has been tying Vanetti family from their own liberty as a family, we get to see their attempt at stabbing the back of each other and more. These politics occur in such dilemmatic way, leaving the characters involved in the story to find the solution each to their own way of thinking. Some wants peace, other wants wars, yet that’s not the real part of the story.

The most intriguing part of 91 Days is to see how this chain of events influences Angelo/Avilio’s plan to make his revenge worthwhile, even if it could take his live. The wounded-up character shows a cynical and silent act throughout his encounter with the Vanettis, yet ingeniously crawls through every part of the family’s background to set his plans well. This series worth itself a watch only from this aspect alone. Of course, there are other characters that stand out besides Avilio. But they are mostly filled with a standard characterization, that even though was made that way, in fact it gives life to the main protagonist character as a human.

Nero Vanetti, being his silent nemesis throughout the series, gives him a lot of progression on how his character deal with all the revenge and the pointlessness of life. The same could go with Corteo, his long-time best friend, who even cannot be considered as a well-written character, but still also contributes a little bit for regaining the humanity Avilio Bruno still has, and making him reconsider his revenge plan. “Is this the best choice?”, “Must I do this?” These kinds of questions continuously crawls in the thinking of Avilio and there is no exact answer to that question, which leads into another point of the series.

So many characters are bound to some dilemmatic choices in 91 Days. Ideology, family, and integrity unseemingly become the main theme of the story. People kill each other not because they want to, but because they have to. Whether it is from self-indulgence or the restraint of others, the series establishes a theory of this boundless evil cycle that set its stone at the very end of the story.

The weakness of this anime instead lies on its direction, especially in artstyle and how many characters it wants to represent. Close-up shots don’t seem to elicit some problem, but things do get a little messy when they decide to use landscape shots such as one above. Though it doesn’t restrict the overall enjoyment of this anime, 91 Days surely lost a little bit of its charm in the process.

I mentioned about the number of characters too. Gangster stories are often relatable with tons of cast, but in the series only a few of them gets the treatment they deserved. It’s not rare to see the characters who are only introduced as plot-bait, or even worse, being all around the series but still gets a little to no exposure about their background. The amount of characters shouldn’t be a hassle for a long-running show (anime such as Monster and Fullmetal Alchemist had proven it), but in a series where all the things should be wrapped up in 12 episodes, 91 Days has taken a badly made decision on this one. The only thing left memorable is how edgy Vango can be at times or even worse, the main protagonist himself.

91 Days surely provides an interesting variety to the contents of Summer 2016. The anime as a whole gives bleak presentation of Prohibition filled with a bit of anime taste, shown by how relatable some of the plot events to many of anime culture as a whole (the joke, character traits, etc.). It may doesn’t seem to be a big discussion material for long time, or in opposite, it may gain some cult following. But a certain thing for sure, 91 Days is a essential for those who seek a little bit of mature conflicts and don’t particularly bothered by minor things such as animation errors or insignificant subplot.

P.S.: Have I mentioned about the booze? They appear like in every scene of the series. I don’t know the agenda behind this decision, but it could be fun to rewatch it just to count how many of those whiskeys and beers introduced in whole 6 hours. 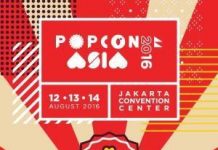 PopCon Asia 2016 Will be Held on August