After succeed with defeating the Mobile Fortress Destroyer, KAzuma Satou and his party, Aqua, Darkness, and Megumin were claimed as the saviors of the town. But their heroic days were over in an instant when suddenly some people from royal court came to imprison Kazuma because of what they did, teleporting the explosive device to a Lord’s house, he was suspected of the crime of subversion to the state. Hence Kazuma’s daily life in prison began while he waited for his judgment to come.

The first episode of Konosuba sequel is opened with some parody from Star Wars intro scene, with some English written synopsis (although there are some typo over there). From the very first minute this anime tries to give some jokes with some slapstick gag, and some comedic visual and background music that makes this anime looks like some sitcom. In my personal opinion, one of the very strong component to build up the joke in this anime is the comical-dumb-faces character design, which really looks like this design is created only to make the jokes funnier. The combination between comedy and RPG-themed-game in this anime is also another interesting part. This anime also still presents some flashy animation sequence. Kono Subarashii Sekai ni Shukufuku O! 2 is the entertainment media product in this season presented for you who look for some RPG-themed-isekai anime with some funny gag all over it. 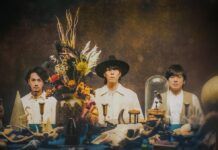