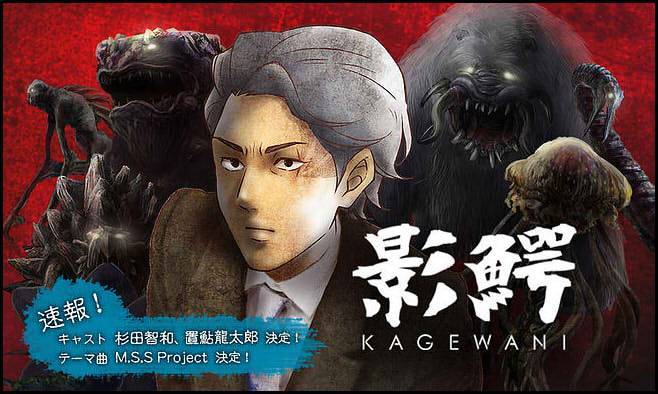 Kagewani is a horror show which revolves around monsters called UMA (Unidentified Mysterious Animal) that suddenly attack humans. It folows a biologist named Sousuke Banba, who is trying to uncover the truth behind these monsters. The only clue he has is the keyword “Kagewani”, a word that literally means “Shadow Crocodile.” The show is directed by Tomoya Takazima and written by Hiromu Kumamoto. Both of them already worked together before, creating a short horror titled Yamishibai: Japanese Ghost Stories.

Since this show created by the same staffs who create Yamishibai, it has the same animation style. The animation looks like paper cutout that are being animated in front of a background. It makes the character animations look stiff. Sometimes, the way the characters move look like a gif image, and sometimes the staffs use weird transition to make the characters do different things. This animation style is definitely unique. It gives viewers a sense of weirdness, feeling like watching something from a different world. It works in this kind of shows, because the monsters themselves are surely something can’t be found in the real world

But while the animation style is surely the aspect that stands out in this show, the staffs also paid attention to other aspects. The sound direction, for example, use creepy ambient sounds and heart-pounding background music to build a scary atmosphere. The coloring used pale colors, creating a grim mood. The staffs cared for small details in the visual presentation, such as shaky camera effects when a character is being chased by the monster, bias effects in a underwater diving scene, or shadow effects when the character moves in the middle of the woods. These small details not only make the show feels scarier, but also make it feels realistic even though the animation style is not.

The curious style of animation, though, might not be appreciated by some viewers. Such a limited and stiff-looking animation might be seen as unrealistic and funny. The series is also episodic in nature. This show is a typical monster of the week show that presents different random monster each week. This show’s  protagonist, Banba, only get little screen time in each episode, and his actions are limited to investigating the monster. Fortunately the plot started to become more interesting after 3 episodes, when each monsters revealed to be actually connected to one another and Banba got more screen time

Overall, the uniqueness of this show can appeal to some viewers but not for others. The unique animation is  also supported with other aspects such as the music to make it even scarier. Since this show is only about 8 minutes long, you can at least check this out if you are looking for monster show. Except, of course, if you are looking for the monsters that appears in monmusu