Year 526 of Liturgical Calendar. Humans, wizards, and half-human half-beasts involved in a conflict caused by the war that happened 500 years ago. In the midst of the conflict, a witch named Zero was looking for her magic book called “Grimoire Zero” which was stolen by another wizard called Thirteen. In the midst of her search, she met with  half-human half beast who works as the mercenary for a living.

Handled by the studio which have worked on other fantasy anime last year (Re: Zero kara Hajimeru Isekai Seikatsu), the magical fighting and action sequence in this anime is pretty exciting although only shown near the end of the episode. And it sets up tge conflict between human, half-human half-beasts, and witches pretty well. If you are a fan of fantasy-themed story, Zero kara Hajimeru Mahou no Shou is an anime you should follow. 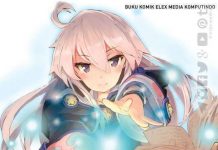