Previously, the game has been green-lighted and ready to be released in Steam. But as of the l time of this writing, details regarding the release of this game hasn’t been revealed yet.

Ghost Parade is a 2D side-scrolling game themed on Indonesian ghosts from across the country. The game tells about the adventure of Suri to return home with the help of her ghost friends. In the first episode of the game, Suri and her friends are preventing the illegal loggers from destroying the sacred forest. Watch the trailer here:

Lentera Nusantara studio creates this story to reform popular mindset towards supernatural beings such as kuntilanak, tuyul, buta ijo, and many more. As shown by films, ghosts are portrayed as terrifying, evil, and bloodthirsty entities. The game shows that ghosts are not actually that different from humans as they have their own stories and lives. Moreover, they will not disturb anyone if they are not being disturbed in the first place. The first episode tells that we should be more cautious of the vicious humans than to the beings which we see as the scary ones. 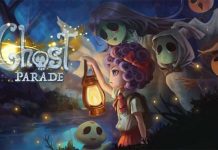