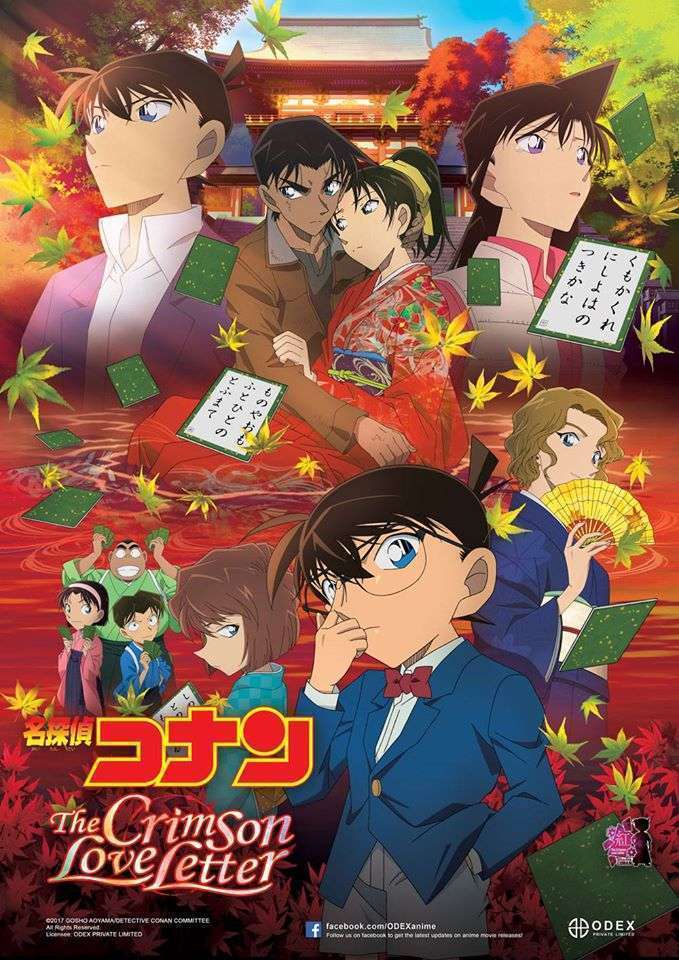 The film focuses on the romance between Heiji Hattori, a detective rival to Conan from Kansai who is also his best friend, and Kazuha Toyama, a close friend to Heiji since childhood who sometimes appears alongside Heiji in solving cases. The film is set in Osaka, which is Heiji’s hometown. The film also features Momiji Ooka, a Karuta champion who is Kazuha’s love rival, and has appeared recently in the latest Detective Conan comic.

The film begins with a bombing at Nichiuri TV at fall, while the Karuta competition, Satsuki Cup, which is a crown for Hyakunin Isshu champion in Japan, was being shot inside the facility. The incident caused a huge commotion and while the building was burning, Heiji Hattori and Kazuha Toyama were stuck inside. They were saved by Conan who rushed to the  scene on the nick of time. Neither the culprit nor the motive was known at that point.

After the chaos post-bombing, Conan met a mysterious girl named Momiji Ooka who claimed that she is Heiji’s fiancee. Ooka is a high school level Karuta champion in Kyoto. Apparently, fate brought Kazuha and Ooka to face each other in Hyakunin Isshu competition. Because of that, Kazuha took an intensive training with Shizuka, Heiji’s mother, who was the Karuta Queen (female champion).

Elsewhere, in a traditional Japanese house in Arashiyama, Kyoto, the current champion of the Satsuki Cup has been killed. Karuta cards were scattered and soaked with blood around the crime scene. Conan and Heiji, together with the Osaka and Kyoto police investigated the murder case and its relation to the Hyakunin Isshu competition.

The interesting point of the film is that the Karuta card game is being taken as the theme of thr story and the murder case. The success of Chihayafuru film last year might have inspired Gosho Aoyama to take the same theme for the latest Detective Conan film. Unlike previous films which shows building/street explosions in the climax, this film has its explosions in the beginning, creating a thrill to watch the film. After the first murder case, though, the plot appears to move slowly and more focused on the love triangle of Heiji-Kazuha-Momiji. Momiji, the mysterious girl who happens to be Karuta champion, is really captivating. She claimed to be Heiji’s fiancee, but is their relationship that close? There are many surprises up until the end of the film which should not be missed.

In contrast to the previous films where the cases are thought-provoking and hard to be solve, this film shows an easier murder case, which the audience can follow all the way to deducting the culprit. If you are observant enough since the Nichiuri TV bombing, which shown the culprit’s ring, you can figure out the case as it is an important lead to uncover the identity of the culprit.

Furthermore, the romance story between Heiji-Kazuha-Momiji is very adorable, which feels reminiscent to watching local made-for-TV romance flicks, which is very pleasing especially for the female audience. Moreover, the usage of Kansai-ben (Kansai dialects) which can be heard in almost every dialogue between Heiji-Kazuha-Momiji, Mikiko (Kazuha’s friend), Kensuke Achiha (Satsuki’s husband), and Inspector Heizo (Osaka Police Inspector)as well as Inspector Ayanokoji who use Kyoto dialect, is very interesting.

Detective Conan – The Crimson Love Letter places more spotlight on Heiji Hattori as the main character, as the location is set in Kansai (a region in Japan which includes Osaka and Kyoto). Conan’s role here is more as Heiji’s assistant in uncovering the murder case and Nichiuri TV bombing. Conan’s screen time did increase at the middle of the film, yet the spotlight still belongs to Heiji with his closing act saving Kazuha by leaping into a burning house through the thick smokes and high cliff.

The addition of the Karuta element added a more fascinating variety from the murder case and romance-comedy story as commonly shown in Detective Conan films. Also, do not leave before getting through the credits, as there is an epilogue after it.

The film can be seen at CGV Cinemas Indonesia, Cinemaxx, and Platinum Cineplex starting on 7 June 2017!