KAORI delves deeper into the issue of hijab cosplay, which is often performed by muslim fans of anime in recently.

Part 1: Hijab Cosplay: the Emergence of a Trend

Part 2: Interview with the Hijab Cosplayer: Cosplay is for Everyone

Cosplay (Costume Play) is one of the activities related to the appreciation of Japanese pop culture, by wearing the dressing up and as fictional characters (often from anime, manga, or games, but there are many cosplay of characters from other media as well). Cosplay has been growing well in Indonesia along with the growth of various Japan-themed events, from international class events (such as AFA or Indonesia Comic Con) to just local school or campus festivals. Events like these often include a cosplay competition. Thus, cosplayers appear at almost every event, either participating as contestants in the cosplay competitions or just to come as visitors. And there is also a national level cosplay competition in Indonesia called Clas:h.

Recently, a new way of cosplaying has emerged, that has been called hijab cosplay. The term hijab can refer to a traditional veil worn by muslim women in order to cover awrah (parts of body that are not allowed to be seen other than by relatives and other women) which can also be a symbol of privacy and modesty. There are different interpretations on how much need to be covered, but usually covering the hair and chest are required. The appearance of a person doing cosplay while using hijab on the internet has now encouraged more muslim fans to cosplay using hijab, becoming a sort of trend among some Indonesian fans.

The Appearance of Hijab Cosplay

It is not clear when exactly the idea of using hijab in cosplay appeared. But this has become a new trend in the cosplay world, particularly among those who routinely wear hijab. The idea is that the cosplayers can become the anime character they love while remain covered as required by the rules of hijab.

Various methods of covering can be used. For the hair, where regular cosplayers usually use wigs, a hijab cosplayer will use a headscarf of certain colour that match the hair colour of the character  being cosplayed.

For the rest of the costume, if the character’s dress reveal some parts of the body, then the costume worn by hijab cosplayer will be adjusted to look covered as much as possible. But such method is only used when the character’s dress do reveals some body parts. It’s a different situation when cosplaying a character who already wears a completely covering clothing.

The Appearance of Hijab Cosplay Gallery

Warm response from cosplay fans encouraged the hijab cosplay to grow more. Hijab cosplayer and the fans even made a facebook group at Hijab Cosplay Gallery.

The group collected photos of hijab cosplay from around the world. The group also often feature fan arts of characters using hijab. The fan arts not just the ones drawn by members, but also by outsiders. 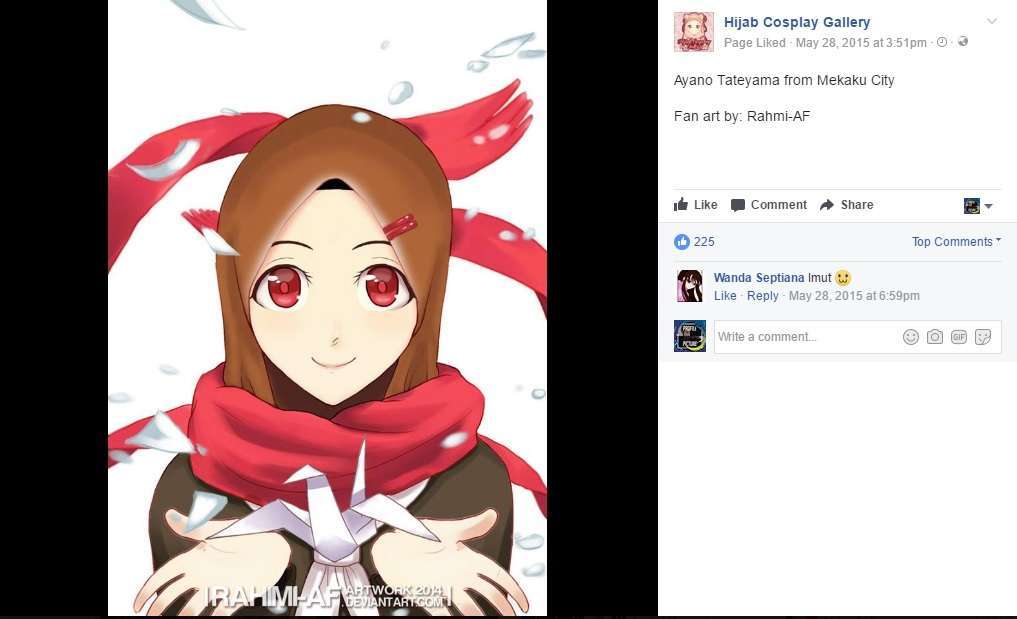 As the popularity of cosplay hijab grew larger, it drew various reactions from cosplay fans. There have been a number of social media users who said that they don’t like people who cosplay while using hijab. 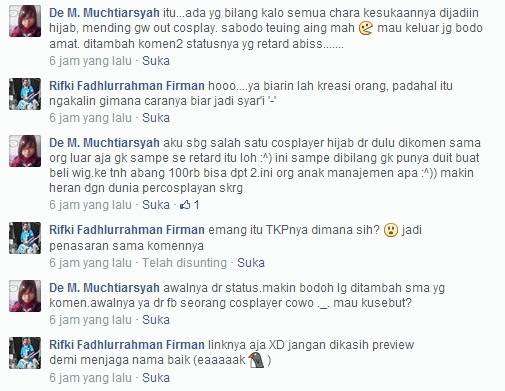 De M. Muchtiarsyah Someone said that if all of his favourite character got hijab cosplay, they would leave cosplay. I don’t care if he wants to leave or something. And the comments to the statement are retarded…..

Rifki Fadhlurrahman Firman hooo…. They should have let it be as someone else’s creative idea to remain syar’i.

De M. Muchtiarsyah As a hijab cosplayer, I’ve never received a comment as retarded as that before. This one accused hijab cosplayer as having no budget to buy a wig that costs just Rp 50.000 (about US$ 3.75) a piece at Tanah Abang (Jakarta’s major textile market). Is this a management student? I don’t understand the world of cosplay now

Rifki Fadhlurrahman Firman Anyway, where did you find the comment? I’m curious about it

De M. Muchtiarsyah It starts from a status at facebook that gets even dumber with the comments. It is from male cosplayer’s facebook ._. Do you want to know the name?

Rifki Fadhlurrahman Firman  Just give me the link XD don’t say the name. 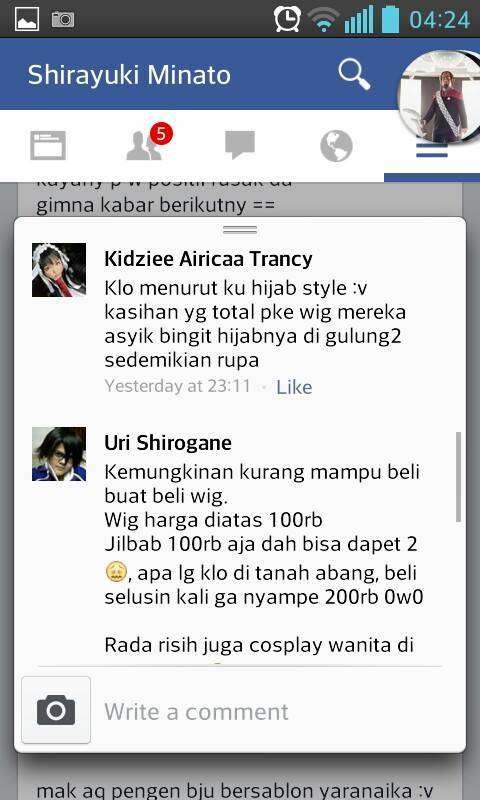 My thought about hijab style (cosplay) :v it’s disrespectful to others who give it their all by using wigs, must be easy to fashion the hijab to the shape they want.

Out Of Character (OOC) here is a sort of unwritten rule in cosplay. This is as the statement of Jiwon Ahn about the definition of cosplay:

“Cosplay or kospure is an activity of anime or manga fans who are copying or dressing and acting like their favourite character from certain anime or manga (or game, literature, idol, movie, or icon) with the purpose of showing off their costume (or character) in public. “

Copying the character here means more than just their looks and make-up, but also their gestures, behaviour, and talking styles.

Hijab cosplay is often considered as a form of OOC because they are not wearing the accurate costume and props of the original character. They often regarded not giving doing their best in their cosplay because of it.

There are also some people who suggest that hijab cosplayer ought to cosplay more suitable characters with less exposed clothings to begin with. They should consider to cosplay as a character with fully covered costumes or has a lot of armor like Power Rangers​/Sentai Kamen Rider, or even robots like Gundam.

But among the various reactions and comments, there is a particularly interesting one about the double standards toward hijab cosplay.

Eigengrau Amaterashou let’s set aside the issue of religion for a sec, and I’ll give a simple demonstration.

When there’s a cosplay of sexy fanart people go “OH YESH KYAAA NOSEBLEED”, but when there’s a hijab cosplay they say “S*IT, YOU RUIN THE CHARACTER! DON’T BRING UP RELIGION HERE F***!”

Get it? To put it simply: double standard?

Back To Our Own Passion

Cosplay has become an inseparable part of Japanese-themed events. The new way of cosplay, hijab cosplay, has been an alternative for those who want to cosplay without revealing the body.

Everyone have the right to their own preferences and to like hijab cosplay or not. There are people who like and keep cosplaying like that because that is the way they enjoy doing it, and there are also those who for various reasons would not like it. To use hijab in place of wig is an expression of choice by the cosplayer herself. When a cosplayer wishes to remain covered while costuming as a character with somewhat revealing costume, using the hijab is a means that can be taken to achieve it. If the character’s costume is already covered enough then the cosplayer has the option to cosplay with hijab or with the original costume as it is.

I am an Otaku and also a Devout Muslim

Animaga 2016 : A Break for Fandom in Melbourne