From the makers of Strikers 1945, Gunbird and Tengai, the classic fighter aircraft game in the 90’s conquers mobile gaming! Strikers 1945: World War is coming on your way this month of July!

Strikers 1945: World War comes as shooting combat mobile game combined with stylish characters. Countless 45 stages of Normal / Hard Mode to test your aircraft combat gaming skill. Collect all 18 unique set of Fighter Planes. Boosts your aircrafts with 16 Operators to choose from! Get them all!

Bridge the gap of past and present, download Striker 1945: World War for free today!

Striker 1945 – World War brings a new mobile game hype. The game which was ported from your favorite Arcade Gaming Shop is now back as an android game. You might just hear it now, but the game is filled with attracting and interesting story with unique characters flying all over the world.

Download and play Striker 1945: World War for an amazing fighter aircraft game! Start now your shoot’em-up mobile game as you fulfill each mission.

A collaboration of the arcade classics such as the Strikers series, Gunbird and Tengai!!

Countless types of missions and hundreds of stages!

A Shooting Fest of Global Proportions!! 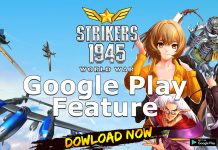 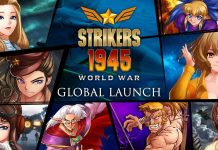