On Monday (18/5), ODEX Indonesia had announced the plan to bring Natsume Yujincho Movie: Utsusemi ni Musubu anime film to Indonesia. The announcement was made on their Indonesian facebook page, where they posted Japanese trailer of the film. While there is no official release date yet, the post mentions that the film will come to Indonesia in the late 2018.

Adapted from manga series with the same title, Natsume Yujincho (English title: Natsume’s Book of Friend) tells the story of Natsume, a boy who has the ability to see spirits. He inherited a strange book from his grandmother, which is used to bind spirits under his grandmothers control. With help from a spirit cat, he tries to free those spirits. The manga, which is created by Yuki Midorikawa, began its serialization in Hakushensha’s LaLa DX shoujo magazine in 2005. In 2008, Natsume Yujincho was listed as one of the finalist in first manga Taisho Award. The manga had also been published in Indonesia by Elex Media Komputindo publisher with the title Natsume Yujincho.

The latest anime film, titled Natsume Yujincho Movie: Utsusemi ni Musubu, will feature an original story written under supervision from Midorikawa. Hideki Ito will serve as director, while previous series director Takahiro Omori is listed as chief director. Series composition is handled by Sadayuki Murai and the animation will be produced by Studio Shuka. 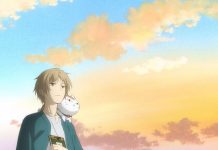 ODEX to Bring “Eureka Seven Anemone”, “Natsume’s Book of Friends – Tied to the Temporal World” and “Nanoha: Detonation” to Indonesia