This fact is established in the first Sherlock Holmes novel A Study in Scarlet (1887). In the second chapter, Watson, who just moved to 221B Baker Street, was genuinely surprised that although Holmes’ has extensive knowledge in the crime-related field, he didn’t know something thought to be common knowledge like the heliocentric model of the solar system. Holmes dismissed that information as “unnecessary” for his work and argued that humans should only remember things that are actually useful for them.

So, is that information important? Not necessarily. In many modern Sherlock Holmes adaptations, this trivia has pretty much been forgotten. What’s important isn’t that Holmes didn’t know about our solar system, but the fact that Holmes is eccentric, detached from common sense. Holmes stated that he could only remember so much because he chooses which informations are important for him and forgets everything else, including heliocentrism. This model of “a smart person with eccentric personality” has become one of the most common character archetypes in detective stories. From Agatha Christie’s detective icon Hercule Poirot who is really proud of his “grey cells” to Arswendo Atmowiloto’s Imung, an Indonesian teenage detective who is hard to be taken seriously because of his shabby appearance.

What’s interesting is that in those stories, their eccentricity rarely becomes a hindrance in their investigation. In the detective story, especially the classic one like Holmes, their eccentricity has existed as a character trait, not a source of conflict. This is understandable because the mystery itself should be the central conflict of a detective story. In those stories, dramas that come from detective’s eccentricity is an unwanted distraction. After all, fans of the genre want to see Holmes solved the mystery, not seeing him wasting time repairing his relationship with Watson because they argue about the solar system.

Nowadays, detective fiction has already evolved. There are many examples of detective stories where the sleuth’s eccentricities become the central conflict of the story. One of the detective stories that feature an eccentric detective character is Nisio Isin’s Kyoko Okitegami from Forgetful Detective (Boukyaku Tantei) novel series. These novel series tells the story of Kyoko Okitegami, a female detective whose memory always reset after she goes to sleep. This novel series is adapted into several media, including a manga version. The manga version has already been released in Indonesia by m&c!, titled The Memorandum Of Kyoko Okitegami. But What about her eccentricities that differentiate her from other eccentric detectives?

The Forgetful Sherlock and Unfortunate Watson

Although Kyoko Okitegami is the main detective of this manga, the story itself is mainly told from the perspective of Yakusuke Kakushidate, an unfortunate young man who is often involved as a suspect in mysterious cases. In those cases, Yakusuke (who can be considered as “Watson” in this story), always seek the help of Kyoko, a detective who he is romantically interested with, to cear his name. Together they solve many cases, even though Kyoko would always end up forgetting Yakusuke and their relationship.

While Yakusuke’s misfortune is more like a cheap excuse so that he can be involved in a case, Kyoko’s amnesia situation is interesting because it gives her a new conflict other than the mystery cases themselves. With her amnesia, Kyoko has a time limit to solve the cases. She has to solve the cases before midnight, or at least before she sleeps.

Her amnesia also could lead to another interesting situation. In the first case in the manga, someone drugged her to sleep, which makes her forget about the case she us on. It shows that while she is smart, her problem could lead to a dangerous situation which creates another conflict.

This is why her relationship with Yakusuke could potentially lead to an interesting dynamic. When she is drugged, it is Yakusuke who has to explain the situation to her. Her vulnerability actually makes her unsuitable to work alone, yet she does not have an assistant to help her. in most of the cases, it is Yakusuke who fill in this role. Furthermore, It is also clear that Yakusuke has a romantic crush to Kyoko. It is sad that no matter how much he has met her, Kyoko always treats it as their first time meeting. Their dependence to each other, even though Kyoko does not realize it, could become an interesting aspect of the story for the readers.

Moreover, the end of the second volume actually hinted that Kyoko’s memory problem probably should be treated as something more serious. She does not know why she becomes a detective. Kyoko’s memory problem could be tied to the reason why Kyoko became a detective in the first place and this could probably lead to bigger story material in the future.

Closer Look at the Manga Adaptation

The tankoubon version of manga also includes some bonus material. The last part of the first volume has a couple of simple cases to be solved by the reader while the second volume has funny 4-koma manga about Kyoko and Yakusuke’s daily life. Readers looking for extended mystery in this manga will probably appreciate the added puzzle in the first volume. Keep in mind that the puzzle solution will probably involve some understanding of the Japanese language.

The best part of manga adaptation is probably Kyoko’s elegant character design. It seems that the mangaka You Asami really understands that Kyoko is the star of the book and she should get the best treatment possible in term of design. In manga version, Kyoko Okitegami is presented as a beautiful and fashionable woman. In each case, the mangaka changes Kyoko’s outfit. The type of clothes also varied. From the long dress with a scarf, light clothes with hotpants, to blouse with long pants, the mangaka seems to care about Kyoko’s appearance and is not reluctant to change her clothes in the best way possible. There are two things that stay though: Kyoko’s round glasses and her silver hair.

Designing Kyoko as attractive as possible is quite important because every case always revolves around how she can solve them with her amnesia. Unlike Detective Conan (Case Closed) who constantly gives clues for readers, The Memorandum of Kyoko Okitegami is quite shy when presenting detail and evidence. It is actually closer to Hyouka‘s earlier case, where the readers can find the joy by watching the detective solve it with their eccentricities (in Oreki case, it is his energy conversion policy). The Memorandum of Kyoko Okitegami manga is more interested in depicting how Kyoko solves her problem elegantly. It is definitely not something that readers who read a mystery to solve the case along with the detective will appreciate. But for those who read a mystery to simply follow how a sleuth character solve a case, this is worth to read.

The Memorandum of Kyoko Okitegami volume 1 and 2 manga review is continued in the second page. 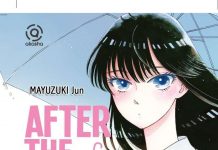