Indonesian comics publisher Elex Media Komputindo is releasing Hanaka Haruse‘s mystery manga The Escape Game (Dasshutsu Game) in Indonesia. The manga is included in the list of new comic books scheduled to be shipped on 14 July 2021, and according to the product listing at Gramedia.com, the book retails for Rp 28,000 (about US$ 2.1).

Elex Media’s synopsis of the manga describes the story of The Escape Game as follows:

The manga is published by Shogakukan under its Ciao Horror Comics label and finished in one volume. 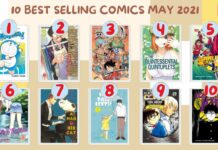